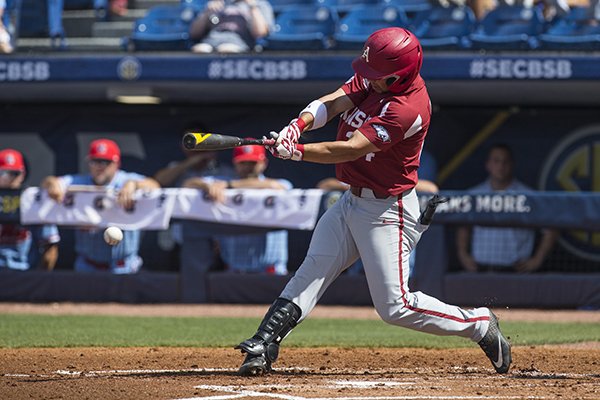 Arkansas center fielder Dominic Fletcher swings at a pitch during an SEC Tournament game against Ole Miss on Friday, May 24, 2019, in Fayetteville.

HOOVER, Ala. -- The University of Arkansas baseball team's hitting struggles continued on Friday when Ole Miss beat the Razorbacks 3-2 at Hoover Metropolitan Stadium to eliminate them from the SEC Tournament.

Arkansas went 5 for 33 against the Rebels on Friday. It was fourth consecutive game in which the No. 5 Razorbacks were held to five hits.

Coming into the SEC Tournament, the Razorbacks had a .306 batting average.

In three SEC Tournament games, Arkansas was 3 for 24 with runners in scoring position and 7 for 43 with runners on base.

"Yes, there is a concern because if we don't hit and score, we're not going to win," Razorbacks Coach Dave Van Horn said. "That's pretty obvious.

Arkansas has hit 78 home runs, but Matt Goodheart hit the Razorbacks' only one in the SEC Tournament when he drove a 1-2 pitch from Ole Miss starter Gunnar Hoglund over the center-field wall in Friday's game for a two-run shot.

"Honestly, I'm not too concerned about our offensive struggles here recently," Goodheart said. "I know what this team is capable of doing, and I hope [the Razorbacks] know, too, because we can really swing the bats whenever things are really clicking."

Arkansas Coach Dave Van Horn said he wanted to give some of his position players a break this week -- especially with the Razorbacks playing in the heat of the day with temperatures in the 90s -- and he did on Friday against Ole Miss.

The Razorbacks had a lineup they've used in nonconference games this season with Zack Plunkett catching in place of Casey Opitz, Curtis Washington taking over in left field for Christian Franklin, Jack Kenley moving from second base to third in place of Jacob Nesbit, Trevor Ezell moving from first to second, and Jordan McFarland playing first.

It was the fourth start in the past six for Noland in which he has has gone at least five innings.

Razorbacks Coach Dave Van Horn said Noland did a good job of mixing up his pitches.

"He mixed in a few changeups, two different breaking balls, fastball with some sink," Van Horn said. "He got some ground balls.

"When he works ahead in the count, he's really tough to figure out if you're a hitter."

When Ole Miss beat Arkansas 4-3 in Fayetteville on March 30, Noland pitched 42/3 innings and allowed 2 runs, 7 hits and 1 walk with 3 strikeouts.

"I think he's made some strides, become a little bit more mature with how he pitches," Rebels center fielder Thomas Dillard said after Friday's game. "He can throw all his pitches in the zone.

"He's got really good stuff. He was definitely on his game today. He threw really good."

Jacob Adams, Ole Miss' senior second baseman from Conway, hit a line drive in the third inning that looked to be headed into center field for a single.

But the Rebels had a hit-and-run called, and his hard-hit shot ended up being a double play to end the inning.

Arkansas shortstop Casey Martin, moving to second base with Grae Kessinger running from first, caught the Adams' line drive and then tagged out Kessinger.

Adams, who had a sacrifice bunt in the sixth inning, went 0 for 1, but he scored the game-winning run in the eighth inning after he was hit by pitch by Zebulon Vermillion.

Georgia Coach Scott Stricklin was miffed when freshman Connor Tate was stretching in the dugout after being told to get ready to pinch hit against Arkansas in the seventh inning of the Bulldogs' 3-1 victory on Thursday.

"I said, 'Connor, you're up,' and he had to go run and get his batting glove, his helmet, his bat," Stricklin said. "That's a freshman for you.

"Ten years ago, I might have said, 'Someone else grab a bat, because you're not ready.' But I took a breath and let him get up there. I'm glad I've matured a little bit and let him hit."

Tate rewarded Stricklin's patience by hitting an RBI double that tied the game 1-1.

Arkansas Coach Dave Van Horn said he believes the Hoover Metropolitan Stadium scoreboard has been about 4 miles per hour slow when it shows the speed of pitches.

After No. 2 seed Arkansas was the home team in its 5-3 victory over Ole Miss on Wednesday, the No. 7 seed Rebels were the home team for Friday's rematch.