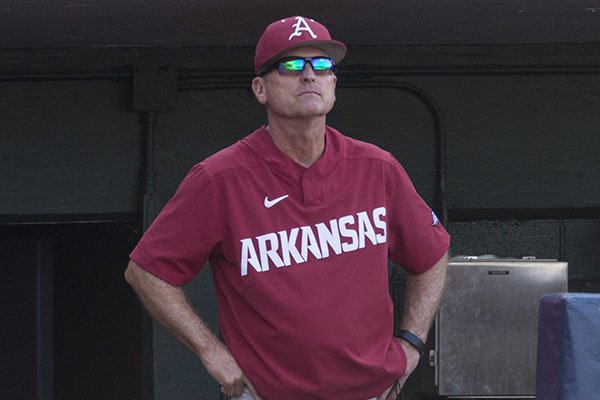 Arkansas coach Dave Van Horn watches from the dugout during an SEC Tournament game against Ole Miss on Friday, May 24, 2019, in Hoover, Ala.

HOOVER, Ala. -- After 10 days on the road, including the final regular-season series at Texas A&M and three games in the SEC Tournament, the University of Arkansas baseball team returned to Fayetteville on Saturday.

The Razorbacks hope it's a long stay at home and that their next road trip is in three weeks to Omaha, Neb., for the College World Series.

Arkansas (41-17) is ranked No. 5 in the USA Today coaches poll and projected to be a No. 5 national seed in the NCAA Tournament by Baseball America and D1Baseball.

The top eight seeds not only host NCAA regionals, but also super regionals if they advance.

"I feel like we're probably going to be a top-8 seed, but that's not my decision," Arkansas Coach Dave Van Horn said after Ole Miss beat the Razorbacks 3-2 on Friday to eliminate them from the SEC Tournament. "I know we're going to host a regional. I hope what we did throughout the season really is what matters."

Arkansas went 20-10 in SEC play and shared the West title with Mississippi State, which is ranked No. 3 in the coaches poll.

The Razorbacks are No. 6 in NCAA baseball Ratings Percentage Index, which ranks teams based on their performance and strength of schedule.

Splitting two games with Ole Miss and losing to Georgia at the SEC Tournament doesn't figure to have much impact on Arkansas' status as a top-8 seed because the Rebels are No. 25 in the RPI and the Bulldogs are No. 3.

Georgia's Scott Stricklin and Ole Miss' Mike Bianco, the two coaches who faced the Razorbacks in the SEC Tournament, said Arkansas will be a top-8 seed.

"Oh, there's no question," Stricklin said. "They're a national seed. I hope that we end up seeing them in Omaha.

"That's as good an offense as there is the country. Watching them on video, it can make you nauseous. They're really good. There's no easy outs, 1 through 9. They've got great arms, too."

Bianco said the Razorbacks don't have to be nervous about whether they'll be among the NCAA Tournament selection committee's top choices.

The 16 regional host sites will be announced tonight by the NCAA. The NCAA Tournament's 64-team field and national seeds will be revealed at 11 a.m. Monday on ESPNU.

Goodheart said the Razorbacks won't dwell on their 1-2 record in the SEC Tournament.

"Of course, you never want to lose anywhere, but we're really focused on the regional," he said. "We're looking forward to continuing on with the season and getting back after it and go as far as we can."

Arkansas freshman pitcher Connor Noland, who started Friday's game against Ole Miss and held the Rebels to 2 hits and 1 run in 5 innings, said the Razorbacks are ready to get home and put in some work.

"We have a full week ahead of us," Noland said. "We can get better as a team and work out, so it's a good opportunity for us."

Arkansas' pitching staff held opponents to three runs in each of its SEC Tournament games, but the Razorbacks struggled offensively as they went 15 for 94, including 3 for 24 with runners in scoring position.

"I think we're a little tired," Van Horn said. "We just need to get back home and regroup a little bit and start scoring some runs.

"Our pitching did a pretty good job for the most part, our defense was pretty good. We'll be fine."