Perico peeved with his putting 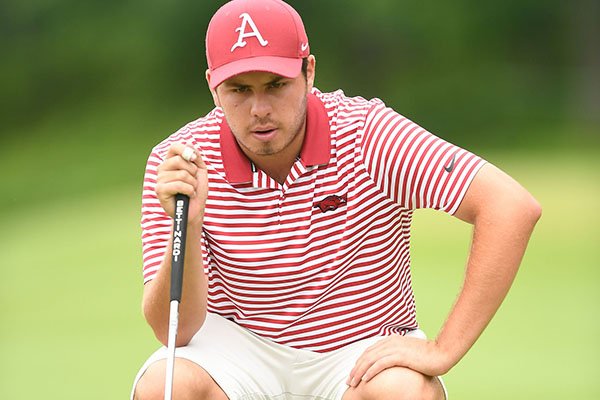 Arkansas surveys a putt during the NCAA Golf Championships on Sunday, May 26, 2019, at Blessings Golf Club in Fayetteville.

FAYETTEVILLE -- University of Arkansas golfer Julian Perico came off the unforgiving course at the Blessings Golf Club on Sunday fuming about his putter.

The freshman's frustration after a third-round 76, which left him one stroke out of a playoff for advancing into the final round of stroke play, revolved around that one club.

"I mean I just putted terrible," Perico said. "I rolled it great, I just can't read a green.

Perico said his poor putting reached a head on his 16th hole of the day, after he bogeyed the par 4 7th to fall to 3 over for his round.

"It got me pretty good on my 16th hole," Perico said. "Like, I just wanted to get done. I was done. Seriously. ... I mean, you miss every putt, it's like you can't make any birdies. My only birdie was a two-putt [on the par 5 5th hole]. And I had a chance to make it. So like it's just terrible putting."

Perico's putting had been solid at the SEC championships, where he went 3-0 in match play to lead the Razorbacks to the title, and at the NCAA Austin Regional.

"I've been here for a year and I just can't figure out a way to putt on these greens because I just can't make any. ... It's a terrible feeling to just know that although you're trying to convince yourself you can make it, like you know you can't. I hit a lot of edges, but again, I putted good but just mis-read every single putt out there."

Southern California provided late drama near the cutline on Sunday evening and claimed the 15th and final spot in the first cut.

Senior Justin Suh sank a birdie putt on No. 17 to offset a bogey on No. 18 by teammate Kaito Onishi at about the same time to give the No. 9 Trojans a one-stroke edge over No. 2 Arizona State for the final slot. Suh hit a one-foot putt for par on No. 18 to wrap up the Trojans' ascent from 23rd to start the day. USC finished 4 over on Sunday, tied for the seventh-best round.

"The guys just played amazingly well," USC Coach Chris Zambri said. "Big performance by Issei Tanabe, and Kaito Onishi hung in there big time after a triple bogey and still made some birdies.

"Justin Suh just kind of played like Justin plays. It was an amazing day. We caught a big break with the weather. It was like playing in a dome and that helped a lot."

Trent Phillips of Georgia, Will Miles of South Carolina and Justin Kim of UNLV will compete in a playoff this morning to determine the final individual to qualify for the last round of stroke play today.

The trio is tied for 29th place at 5-over 221, one shot ahead of Arkansas freshman Julian Perico.

The top nine players on non-advancing teams remain in the field for the final round of stroke play.

TCU added another eagle on Sunday and the Horned Frogs lead the field with four of them through 54 holes.

Hayden Springer posted his second eagle of the tourney with a 3 on the par 5 10th, his first hole of the day. He joined teammate David Ravetto with two eagles each.

Clemson and SMU have three eagles each, while South Carolina and Wake Forest have two. Nine teams have carded one eagle.

No male player had made a hole in one, leaving Wake Forest's Letizia Bagnoli as the only player at the championships with an ace thus far.

The par 4s have been the toughest holes at the championships, with only one player managing to play them under par through three days.

BYU could not rebound from its opening-round 21 over par with no one else on the course on Thursday and wound up last in the 30-team field at 74 over.

The Cougars played that round solo and had it scored as their third round because they do not engage in competition on Sundays. They shot even worse on Friday, a 34 over that essentially took them out of the running for the cut to 15.

The city of Johnson is the actual home of Blessings Golf Club, even though it borders on Fayetteville, and all the material associated with the championships lists Fayetteville as the host city. Chambers of commerce throughout Northwest Arkansas all contributed to the University of Arkansas' proposal to host the NCAA golf championships.

Several law enforcement agencies have provided officers to cover the event, with the Johnson Police Department receiving cooperation from the University of Arkansas Police Department and the Washington County sheriff's office.

After the University of Arkansas' hosting duties for the NCAA men's and women's golf championships conclude, the role will shift west. Grayhawk Golf Club, located in Scottsdale, Ariz., will host the NCAAs for three consecutive years, from 2020-22, with Arizona State serving as host.