Razorbacks will have strength in numbers at Austin 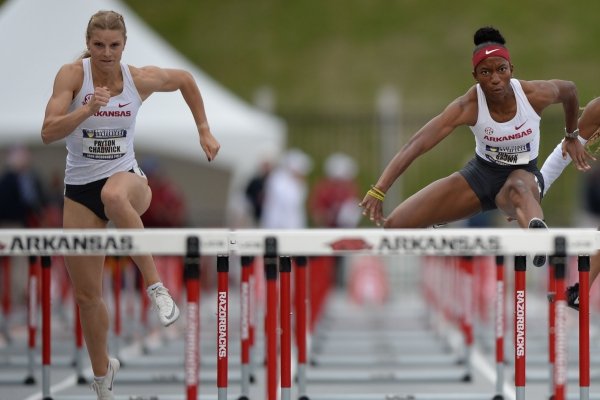 Arkansas' Janeek Brown (center) leads Tonea Marshall of LSU and Payton Chadwick (left) as they compete Saturday, May 11, 2019, in the 100-meter hurdles during the SEC Outdoor Track and Field Championships at John McDonnell Field in Fayetteville. Visit nwadg.com/photos to see more photographs from the meet.

FAYETTEVILLE -- The University of Arkansas women's and men's track and field teams made sure to take care of business at the NCAA West Prelims in Sacramento, Calif., over the weekend.

Arkansas' No. 1-ranked women's team will have a national-leading 17 scoring opportunities at the NCAA Championships June 5-8 in Austin, Texas, after having 13 athletes advance in 10 events at the West Prelims.

The Razorbacks' men's teams will have 11 scoring opportunities in Austin after advancing 14 athletes in eight events.

"If we had to write a script prior to the meet, it pretty much went according to the plan," Arkansas women's Coach Lance Harter said. "We're very pleased with our ability to advance.

"Now it's a process of regrouping, getting some rest and let's go get ready for what we can expect in Austin."

The only setback for the Arkansas women, Harter said, came when redshirt freshman Lauren Gregory had to drop out of the 5,000 because of a foot injury.

"We have a lot of contenders in Austin," Harter said. "No doubt about it."

Harter said he expects Arkansas and Southern California to compete for the team title in Austin as they did at the NCAA indoor meet earlier this year when the Razorbacks won the title and the Trojans were second.

"USC has put together a formidable team outdoors as well," Harter said. "I see [the Trojans] as our main competition."

Arkansas' men's 400 relay advanced to Austin despite having to make a late replacement and put freshman Tre'Bien Gilbert onto the third leg because Kris Hari had a tight hamstring.

"Coach Case did a phenomenal job, switching that relay up 30 minutes before the race," Bucknam said. "Gilbert had never been on the relay, but he ran a great third leg and got the stick from Boyd and got it to Ejiakuekwu and put us in a position to win that heat and secure a good lane down in Austin."

The Razorbacks will be led in Austin by juniors Gilbert Boit in the 10,000 and Cameron Griffith in the 1,500 and senior Gabe Moore in the decathlon.

Boit just missed making the 5,000 final. He finished sixth in his heat in 14:07.99 -- one-hundreth of a second by BYU's Clayton Young for the final quality spot.

"Gilbert's in great shape, but it was a mad dash to the finish and he kind of got boxed in with 200 meters to go," Bucknam said. "He had to get out and around some people, and it cost him a qualifying spot. But he's a contender in the 10,000."

Bucknam said the Razorbacks will take a strong team to Austin.

"We've got 11 scoring opportunities and anything can happen at this stage of the game," he said. "I feel like we've taken another step forward this year."

Arkansas fell out of the coaches' top 25 poll last week despite finishing third at the SEC meet.

"We feel like we're a top 10 team," Bucknam said. "That's our goal as we go into the finals in Austin.

"At this stage of the game, the only poll that matters to me now is how we finish at the national championship when it's all said and done."