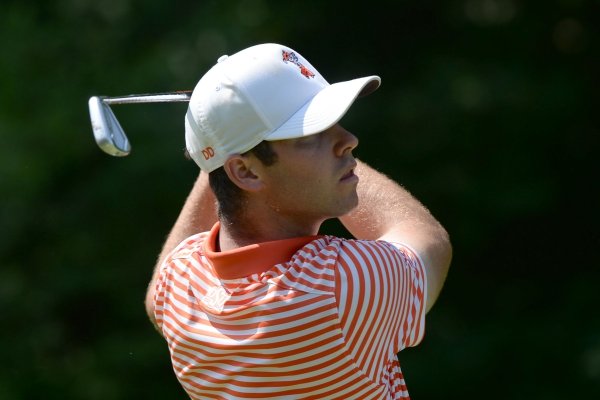 Matthew Wolff of Oklahoma State watches his tee shot Saturday, May 25, 2019, on the 13th tee box during the second day of play in the Men's NCAA Golf Championships at Blessings Golf Club in Johnson. Visit nwadg.com/photos to see more photographs from the day's rounds.

The Cowboys finished with a 4-under 284 on Monday. Their 16-under performance in four rounds gave them a 31-shot separation from second seed Vanderbilt heading into the match-play quarterfinals today at Blessings Golf Club.

"It was a fantastic week," Oklahoma State Coach Alan Bratton said. "What a great test of golf the Blessings has been. We obviously built a big lead, but we wanted to close strong to get ready for match play."

Oklahoma State had the low score all four days of stroke play.

"Our goal was to come out on top in stroke play," Bratton said. "We did it last year and were able to do it again this year."

Wolff, who took the lead Sunday after tying the course record with a 66 on Saturday, was hardly challenged in the final round en route to his school-record sixth title of the season. The No. 1 ranked collegian, Wolff shot 3-under 69 to complete the 72-hole tournament at 10 under, five strokes ahead of Georgia Southern's Steven Fisk.

The day's greatest drama came at the cut line, where SMU was in position to clinch the eighth spot before sophomore Mac Meissner missed a short putt on No. 9 to three-putt, dropping the Mustangs into a tie with No. 13 Clemson.

Meissner recovered to win his hole against Bryson Nimmer in the playoff, helping SMU win the five-man playoff by two strokes.

The prize for the Mustangs is a pairing against the mighty Cowboys at 7:50 a.m. on hole No. 1. Oklahoma State, which placed three players in the top eight and four in the top 15, will be gunning for its 12th national championship.

"That's the consolation prize for getting that eighth seed," Enloe said. "They're a great team, probably one of the greatest teams in college golf history. We're just gonna go out there, and I think we've got some good matchups. I think our guys will fight hard and hopefully get some points for the red and blue."

The day's biggest move came from No. 4 Vanderbilt, which fired a 3-under 285 to charge into second place.

"That's one of the best rounds we've played, not just here but all year," Vanderbilt Coach Scott Limbaugh said. "We kind of saved our best stroke-play round for the last one."

Vandy Senior Will Gordon, who was 10 over after the first round, completed his long stretch of good golf with a 5-under 67 on Monday to move up to a tie for 19th place with teammates John Augenstein and Patrick Martin, Texas A&M's Chandler Phillips and Ohio State's Daniel Wetterich.

Stanford came within one shot of Oklahoma State on Friday, and the Commodores came within a shot Monday. Otherwise, the Cowboys dominated.

"I think it's just another selling point to ourselves that we can compete with whoever is put in front of us," Gordon said. "This puts us on the good side of the bracket, so we're excited."