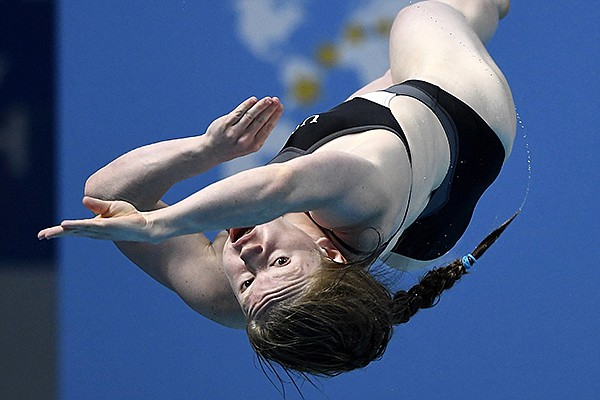 But, on Sunday, the All-American won gold in the 3-meter, qualifying for the 2019 FINA World Championships later this summer. She will represent the United States in Gwangju, South Korea.

Schultz, who also represented the U.S. at the 2017 FINA World Championships in Budapest, Hungary, said she will depart on July 1 and compete roughly three weeks later. Competition runs July 12-28.

"We were in Indianapolis for nine days, so it was a long week," she recalled. "I was definitely really feeling (fatigued) Sunday afternoon during the event, but everyone was in the same position really. You just have to find a way to push through, and thankfully I did."

Schultz, who last March claimed the third diving individual national title in school history with a school- and personal-record 399.45 in the 3-meter finals of the NCAA Division I Women’s Swimming and Diving Championships in Columbus, Ohio, is hoping to carry that prior world championships experience with her and build on it this year.

The scale of the meet is bigger than any other event she's competed in, she added.

"It's a big production. The lights are definitely brighter on that stage," Schultz said. "You just kind of learn how to handle everything that's going on around you and the pressure that goes along with competing at that level."

Competing is not an issue for Schultz, according to her father, Dale Schultz, who has served as Arkansas' dive coach since 2016 and is in his third stint with the program dating back to 1989.

Out of her 35 dives in Indianapolis, she missed only one, he said.

"She stays within herself. That allows her to compete better," he said. "When we get in situations like that I just have to give her her space because I'm the one who's going to make her nervous - not the situation. She's just been like that.

"Whenever the pressure is on, she usually steps up."

"I think (the exposure) helps the program. I just think it's big for the program," Dale Schultz said. "When we - coach Neil Harper and myself - took this back over it was at the bottom. I don't know if you could get much lower.

"It's exciting because it draws more kids and they want to come in and train."

"This also helps during the collegiate season, and I think it shows people looking at our school that we're not just focused on the college season and want great things for all our athletes," she said. "We're serious about not just doing things in the NCAA, but in the world."