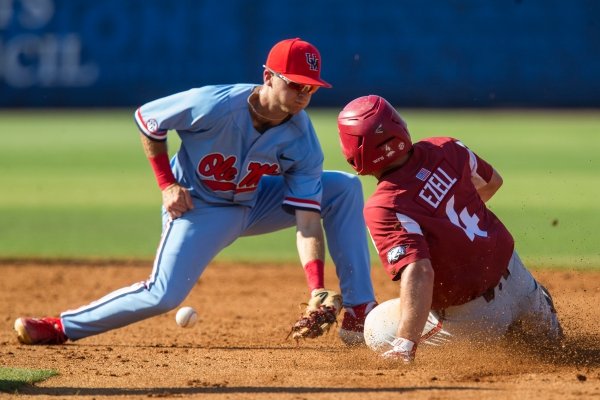 FAYETTEVILLE -- If the NCAA Tournament bracket plays out for the University of Arkansas baseball team the way it has been seeded, the Razorbacks will have rematches against the two teams they played in the SEC Tournament.

The Razorbacks are the No. 5 national seed and bracketed to play No. 12 seed Ole Miss in the super regional round at Baum-Walker Stadium if both teams win their regionals at home.

Georgia is the No. 4 national seed and bracketed to play Arkansas in Omaha, Neb., if the Bulldogs and Razorbacks both advance to the College World Series.

"You're way ahead of me," Arkansas Coach Dave Van Horn said when asked about the possible SEC rematches. "I haven't looked that far down the road. I'm just going to try to get through Friday [when the Razorbacks play Central Connecticut State] and this regional.

"From what I saw pop up, it seems like if the host wins, you're going to have a lot of leagues matching up against each other in super regionals. I'm sure that wasn't by chance."

Arkansas opened the SEC Tournament with a 5-3 victory over Ole Miss, then lost to Georgia 3-1 and to the Rebels 3-2.

Junior right-hander Isaiah Campbell (10-1, 2.37 ERA) has been Arkansas' No. 1 starter all season and said Monday that he's preparing as if he'll start Friday against Central Connecticut State.

But Razorbacks Coach Dave Van Horn said he hasn't decided on a starting pitcher for Friday's game. Sometimes teams seeded No. 1 in a regional will hold back their top starter for the second game.

"We're trying to get as much information on Central Connecticut as we can," Van Horn said in regards to whether the Blue Devils are stronger hitting from the left or right side. "Obviously, we've already peeked at their statistics as far as batting averages and home runs and stuff offensively, but we need to dig deeper into that a little bit more."

The Blue Devils have a .260 team batting average and have hit 26 home runs.

Reserved seating for the Fayetteville Regional is sold out. All-session tickets for the Hog Pen -- the area beyond the left-field wall at Baum-Walker Stadium -- are on sale for $75, according to a news release.

Tickets may be purchased online or at the UA ticket office adjacent to Baum-Walker Stadium.

TCU, which will play California in the Fayetteville Regional on Friday night, was a surprise at-large selection for the NCAA Tournament.

Neither Baseball America nor D1Baseball had the Horned Frogs among their 33 at-large teams in their final projections.

The Horned Frogs (32-26) are No. 59 in the NCAA's Ratings Percentage Index, a formula used to rank teams based on their performance and strength of schedule.

TCU helped itself late in the season by winning 2 of 3 games against No. 15 national seed West Virginia, and beating No. 9 national seed Oklahoma State in the Big 12 Tournament before being eliminated by the Cowboys, who beat the Horned Frogs 7-6 in 10 innings.

"Four or five weeks ago, nobody was thinking about TCU," South Carolina Athletic Director Ray Tanner, the NCAA Tournament selection committee chairman, told ESPNU. "They made a run. They can be dangerous with their starting pitching and they have everybody healthy right now.

Butler, who replaced Gene Stephenson, had a 169-180-1 record in six seasons at Wichita State, including 28-31 this season.

The Shockers never made an NCAA Tournament appearance under Butler, but Razorbacks Coach Dave Van Horn said he believes Butler has the program set up for success in 2020 with most of the players returning from a team that beat East Carolina -- the No. 10 national seed -- twice in the American Athletic Conference Tournament.

"I'm disappointed for Todd and his family, and disappointed that Wichita State didn't give him another year," Van Horn said. "Down the stretch, they played really well.

"Todd had one more year left on his contract where they're going to have to pay him. I just felt like they should have given him one more year because he'd shown so much progress."

Stephenson had a 1,837-675-1 record in 36 seasons as Wichita State's coach with 28 NCAA Tournament appearances -- including seven trips to the College World Series and the 1989 national championship -- but he was fired after the 2013 season after the Shockers played in a regional once in his final four seasons.

Butler had told Wichita media that he looked at Wichita State as a total rebuilding job when he took over the program.

"Coach Stephenson did a great job there, but when he left the program he didn't leave on good terms," Van Horn said. "He was mad at everybody. He let everybody have it, was blasting them in the media.

"That wasn't good for whoever came in next ... to follow that volatile situation."

"Todd's a really good baseball coach," Van Horn said. "I've been around a lot of good coaches, and he's one of the best.

"If somebody is looking for a veteran coach that really knows baseball and knows how to recruit, Todd Butler would be a great hire."