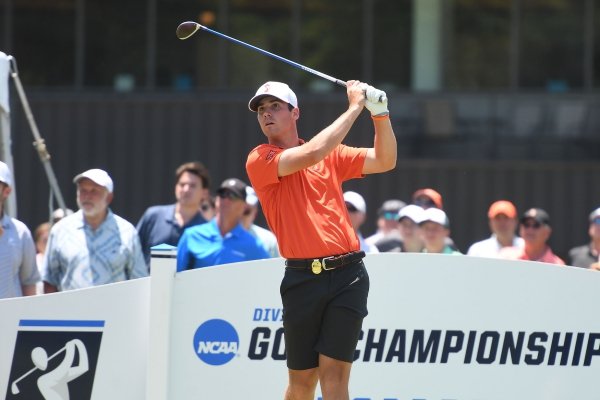 OSU's Matthew Wolff tees off on hole 1 Monday May 27, 2019 during the NCAA Men’s Golf Tournament at Blessings Golf Club in Fayetteville.

FAYETTEVILLE -- Oklahoma State sophomore Matthew Wolff was 4-over par after his first nine holes at Blessings Golf Club on Friday.

He rebounded that day to finish 1-over par, then set about smacking the field around by going 11 under the rest of the way.

Wolff set a school record by winning his sixth tournament of the season Monday, claiming the NCAA individual title with a 10-under 278 for a five-stroke margin.

"Started off kind of slow, but kind of just was mentally tough, and I told myself to kind of pick it up a little bit, give myself opportunities," Wolff said.

The 6-footer from Agoura Hills, Calif., ripped off a 66 on Saturday to tie the course record and reach second place. He passed teammate Austin Eckroat with a 70 on Sunday, and he held all challengers at bay in the final round with three birdies on the back nine after making the turn at even par.

Wolff attacked the course with 20 birdies to tie Auburn's Jacob Solomon. He led the field with a 3.95 stroke average on par 4s, the only player to shoot better than 4.00. He tied teammate Hayden Wood with an average score of 4.44 on the par 5s.

"It was certainly fun to have a front-row seat for the show that he put on," Oklahoma State Coach Alan Bratton said. "Walking with Matt was a treat as it always is. He does some pretty awesome things. He hit an 8-iron from 151 on number 3, which I thought was the best shot he hit all day, and on No. 12 he hit an 8-iron from 200 yards.

"So to have the ability to change speed like that was exciting. He worked the ball both ways and did a fantastic job of keeping his composure all week."

Wolff signed balls and golf gloves for children after his title round and said the experience at Blessings would stay with him.

"The last three days really gave me a lot of confidence for the rest of my career and for the next couple days," Wolff said.

SMU Coach Jason Enloe got choked up moments after his Mustangs beat Clemson in a five-man, one-hole playoff for the eighth and final spot in match play after they botched a chance to clinch the spot on their final hole of regulation.

Enloe is finishing what he called a magical year, his first without wife Katie, who passed away at age 35 from leukemia last summer.

Asked about the message he had for his team Monday night, Enloe said, "Just get some rest and go get 'em tomorrow. They've been playing for each other, probably playing a little bit for me with my fallen wife. It's been a pretty magical year and a great postseason."

Georgia Southern senior Steven Fisk rallied from an opening-round 76 to finish second in the individual race behind Matthew Wolff.

Fisk fired back-to-back 68s in rounds two and three, then finished with a 71 on Monday with his teammates -- who had been eliminated from the team race -- walking along in support.

Fisk said patience was the key to his rebound.

"This is a really hard golf course, and if you don't stay patient all day it'll bite you," Fisk said. "I didn't do a very good job that first day, so my goal for the rest of the week was to just stay as patient as I could."

"It feels great," Fisk said. "It proves to myself that I can compete with the best in college golf. Because we play a little bit of a weaker schedule, there's certain events we don't play the strongest competition, so to come to the most elite tournament in college golf and play like I did against this field was pretty special."

The Big 12 will not only have the heavy favorite to win the championship in Oklahoma State, it will also have a tourney-best three representatives involved in the eight-team match play.

No. 4 seed Texas and No. 5 seed Oklahoma joined the Cowboys in the final eight and will face each other in the quarterfinals.

Texas freshman Cole Hammer got up and down for par on No. 11 from a sand trap in a most unusual way Monday.

Hammer aimed his chip shot from the green-side bunker essentially 180 degrees from the pin. The well-stroked chip landed on the sloped fringe and trickled back to the green within a couple of feet of the flag stick. Hammer made the putt to remain at 2-over par for the day.

Three of the 11 eagles on Monday were made by noncounting players: Reid Davenport of Vanderbilt on No. 5, Will Grimmer of Ohio State on No. 2, and Brandon Mancheno of Auburn on No. 5.

Three Wake Forest golfers -- Lee Detmer, Alex Fitzpatrick and Cameron Young -- posted eagles, and all three had counting scores. Young's eagle came on No. 5, Detmer's was on 11 and Fitzpatrick made his on 15.

The other eagles came from counting players: Cal's Collin Morikawa on No. 6, Southern Cal's Justin Suh on No. 5 and Charlie Reiter on No. 2, Oklahoma State's Hayden Wood on No. 5, and Stanford's Daulet Tuleubayev on No. 15.

The men had managed to post 13 rounds in the 60s heading into the final day of stroke play, and five more accomplished the feat Monday.

Only three players in the field -- Oklahoma State sophomores Matthew Wolff and Austin Eckroat, and Georgia Southern senior Steven Fisk -- posted two sub-70 rounds. Wolff tied the course record with a 66 on Saturday and shot 69 on Monday. Eckroat fired 69s on Friday and Saturday, and Fisk scored 68s on Saturday and Sunday.

Georgia's Trent Phillips won a two-hole playoff among three players on Monday morning to determine the final individual to advance to the fourth round, and the freshman parlayed the extra 18 holes into a strong finish.

Phillips, South Carolina's Will Miles and UNLV's Justin Kim teed off on No. 1 at 9:15 a.m., and Kim made a bogey 5 on the dogleg right to fall out of the playoff.

On the second hole, the left-hander Phillips scored 4 to Miles' 5, giving the Bulldog the ninth spot for an individual not on an advancing team. He went off the No. 1 hole again at 11:11 a.m. with North Carolina's Ryan Burnett and Iowa State's Tripp Kinney to begin round four, and he finished with a 4-under 68 to tie for eighth place.

Phillips won SEC Freshman of the Year honors over Arkansas' Julian Perico and others.

Western Kentucky senior Billy Tom Sargent dedicated his performance at the championships to his former coach, Phillip Hatchett, who was killed by a vehicle while riding his bicycle on U.S. 68 in Logan County, Ky., last June.

Sargent is the furthest-advancing individual in Hilltoppers' history, and he did his former coach proud. Sargent shot 1-under 71 in the opening round, finished with back-to-back even-par scores, and wound up at 3 over for the tournament and in a tie for 11th place.

No. 2 Arizona State led the list of contenders who did not make the cut to 15 teams late Sunday. The Sun Devils finished at 37-over par, one shot behind Pac-12 rival Southern California for the final spot in the 15.

Texas Coach John Fields likes the idea that several teams from the region are in contention for the national title.

"This is the old Southwest Conference corridor right up here," Fields said. "You've got Arkansas, Texas, so people are acquainted with us here. But it's also Big 8 territory. I'm talking about two old conferences. Now it's the SEC and the Big 12 in this area, whether it's Oklahoma or Oklahoma State. It could be a really exciting finish over the course of the next few days.

Good thing Karsten Creek Golf Club, the home of Oklahoma State's golf teams, was host of the 2018 NCAA championships and not the one that is underway at the Blessings.

At least part of the course is under water right now due to flooding in the region. The course is located just below a reservoir located west of Stillwater, Okla. The Golf Channel showed live footage of the 18th hole under water with the flag stick coming up through the water during its Monday coverage.