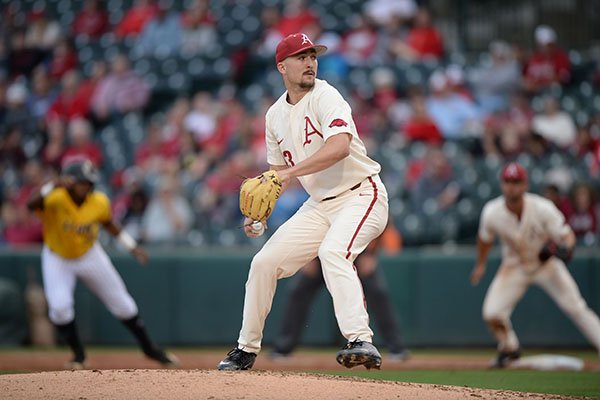 Arkansas pitcher Connor Noland throws during a game against Arkansas-Pine Bluff on Tuesday, April 16, 2019, in Fayetteville.

FAYETTEVILLE — University of Arkansas freshman pitcher Connor Noland will start against Central Connecticut State at 1 p.m. on Friday when the No. 5 Razorbacks open play at the NCAA Fayetteville Regional at Baum-Walker Stadium, a UA spokesman confirmed.

Noland (2-4, 3.71 ERA) will be making his 17th start of the season. The freshman right-hander from Greenwood has a 1.56 ERA in his last seven appearances, including not allowing an earned run over 14 2/3 innings in back-to-back starts against Mississippi State and Tennessee.

Noland went 5 innings in his last start against Ole Miss in the SEC Tournament and held the Rebels to 1 run, 2 hits and 1 walk with 2 strikeouts.

Junior right-hander Isaiah Campbell (10-1, 2.37 ERA) will start for Arkansas on Saturday when the Razorbacks play either California or TCU.

If the Razorbacks play on Sunday, their starting pitcher will be freshman left-hander Patrick Wicklander (5-2, 4.65 ERA).