Where Are They Now: 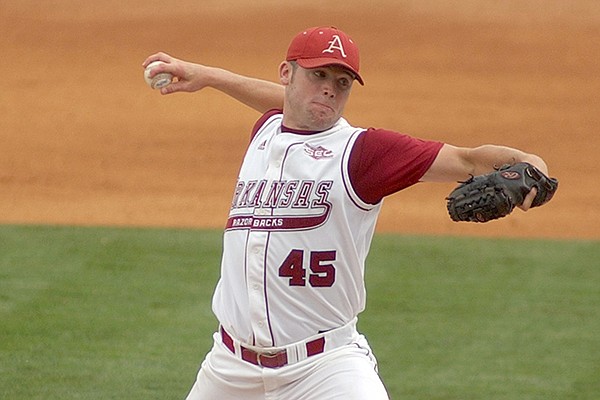 In return Arkansas made him a legend and afforded him the career opportunity of his lifetime.

The trade-off is so well worth it, asserts Boyce, the owner of Paschal Heating and Air headquartered in Springdale.

Back in 2004, Arkansas catcher Brady Toops and starter-become-emergency-reliever Boyce co-starred on what still reigns as the Razorbacks’ biggest Baum-Walker Stadium day.

Boyce took it all, 4-3, under circumstances that only he can fully describe.

“We were in the winner’s bracket game, and I threw against Wichita State on Saturday,” Boyce recalled. “I threw seven innings and some change, and we ended up losing that game in 13 innings, and we turned around and had to play Missouri that night. (Jay) Sawatski pitched, and we won that game. And then we had to come back the next day Sunday and had to beat Wichita State twice. Brady hit the home run in the first game, and then I came in in the second game, I believe in the second inning. Daryl Maday closed out that first game and was lights out, and then he started the second game. He got through the first and then got in a little bit of trouble in the second, and then I came in to relieve him.”

Dave Van Horn was in his second year coaching the Razorbacks upon the retirement of Norm DeBriyn. Van Horn and pitching coach Dave Jorn, returned from the pros to coach with Van Horn after coaching Razorbacks pitchers from 1983-88 for DeBriyn, pieced together a patchwork staff.

“Brannon and Boyce and no other choice” was a moniker applied to that staff’s SEC rotation. Clint Brannon and Boyce started games every weekend. Sunday’s third game sometimes was started by closer Sawatski if not overworked the previous two days.

So on that 2004 championship Sunday, Saturday spent Boyce and Sawatski literally tried to stay in the running if needed for a Game Two.

“I got up that morning, and Sawatski and I went for a run,” Boyce said. “We ran the longer loop just short of five miles. I wasn’t available for that first game Sunday, and I was thinking that game was all but lost. Then Toops hit that grand slam and kind of changed things.”

“You’ve got that lineup card in the dugout that shows who’s available,” Boyce said. “I went and played catch between games and felt OK.

“So I just walked down to the lineup card and wrote my name to let them know I was available. In the second inning Daryl ran into a little bit of trouble, and I remember Van Horn looked at me and asked if I wanted to go. I said, ‘Absolutely.’ And I ran down to the bullpen. By no means was it ever planned for me to go as long as I did. I think I pitched seven on Saturday and seven and two-thirds Sunday. Just one of those things where I think I got a double play ball in that second inning and a couple of short innings in the third and the fourth and the fifth. I was just trying to go one inning at a time.”

Jorn, surpassed only by Boyce’s father, John, for Charley’s respect, so acted the caring dad that Boyce rebuked him the only time in his life.

“I remember Jorn would come down and just check on me,” Boyce said. “'How are ya’ doing?’ he’d ask. We were going pitch by pitch, inning by inning and finally by the seventh or something the adrenaline had taken over. So I told him, ‘I didn’t come this far to come out. You stay on your end of the dugout, and I’ll stay on mine. Quit checking on me. I’m good. We’ll finish it!’”

Boyce did, though he admits he sometimes can’t recall how.

“The eighth inning is kind of a blur,” Boyce said. “And then the ninth inning they had Clint (also coming off a Regional start) warming up in the bullpen, but we were fortunate enough to get out of it.”

How many pitches did Boyce threw those two days?

In his post-game press conference preceding Van Horn and Boyce’s turn with the media, Stephenson praised Boyce’s courage but criticized the risk he believed it put on Boyce’s arm.

Turns out Stephenson was probably right.

“I think that definitely took a toll,” Boyce said of those long seasons. “My sophomore and junior year I was throwing 100-plus innings and my senior year the least amount of all four years that I played. I didn’t bounce back the way I would have liked, but it is what it is.”

He, Van Horn and Jorn all deep down knew Charley wouldn’t have a pro moment to match that super Sunday and that he wouldn’t have been taxed to the max if that was in the offing.

“If I was a big prospect going to play pro ball, maybe it would have been different,” Boyce said. “But for my talent I know I overachieved with what I was given.”

The physical tools he was given, the pros don’t much want.

“I’m a 6-foot right-handed pitcher that at my best threw high 80s, low 90s,” Boyce said. “That was at my best. When you get into pro ball, that’s a dime a dozen. If I had been some kind of mid-90s guy about to be a first rounder that would have been a different story. And I did have an opportunity to go sign as a free agent, but by then I was more or less ready to close the door on that chapter and open a new one.”

He wouldn’t trade a pro opportunity for what he relishes at Arkansas recruited and redshirted by retired Hall of Fame coach DeBriyn then pitching for Van Horn and Jorn.

“I was with Coach D for a year and got to see what makes him special and why he’s so revered,” Boyce said. “Everybody loves him. You could tell he cared for his players. It didn’t matter what you had going on. If you walked into his office he’d drop what he was doing to take care of whatever you needed. A really good dude. And Coach Van Horn, our first year with him you could tell he’s got his system and he’s a winner and he’s going to win. He’s built this program into what it is today.”

Jorn, he compares to his father.

“My dad is a very strong, influential person,” Charley said. “I look up to him as a role model. He taught me the work ethic. Jorn was the same way. If I had to choose the two most influential people in my life it definitely would be my dad and Coach Jorn.”

Charley explained what Jorn imparted and how.

“Jorn was very challenging,” Boyce said. “He’s a blue-collar guy who taught you to go about your business and doing the little things right. And if you were out of line he would call you on it. He was very, very firm. But he was fair. What he and Van Horn did, if you could be successful in that program, there was a real good chance you could be successful in life. A lot of the stuff they taught you is as applicable in life as it is in baseball for sure.”

“Growing up I was either in school, playing baseball or working,” Charley said. “My grandpa started a company in Tulsa in 1961 and now my dad and uncle operate it. It’s called Airco Service. So I was born and raised third generation doing it. During the summers I was doing as much as I can for my father’s company that you can do in junior high and high school. I was in a van as a helper and just learning the tricks of the trade. It’s what I grew up knowing. So I have a decent knowledge of baseball and H and A&C and not much else.”

Well, he must know something else earning a degree from the UA’s esteemed Walton School of Business.

Like so many who initially come to Fayetteville for the UA, Charley stayed on. He loves Northwest Arkansas and the life it’s given his family, wife Shannon and son Beau and daughter Macey. Two of his old Razorbacks teammates, Nick Schmidt and Casey Rowlett, fill key positions at Paschal.

Post UA, Charley started working in Arkansas from the ground up.

“I went to work for a distribution company and got to know all the companies around Northwest Arkansas because they were all my customers,” Boyce said. “From there I signed on with Paschal in 2010. I worked under our old owner for two years, Harold Kimre, a really nice guy. I then bought him out in 2012, and we’ve been doing it ever since.”

Some might give their right arm to build in Arkansas what Charley Boyce has built, but Charley already has. And he’s still in there pitching.