Vitello has Vols in postseason for first time in 14 years 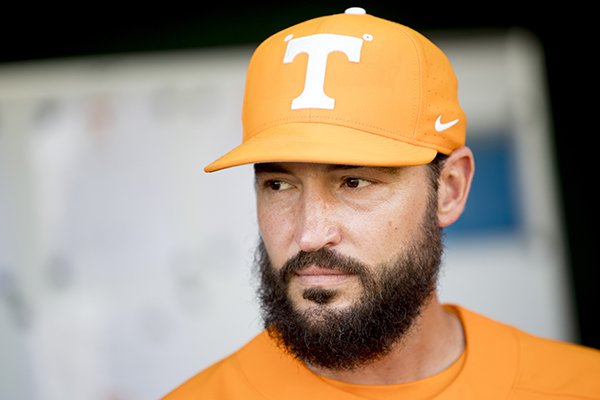 Now the Volunteers want to try to match that 2005 team's accomplishment by also getting to Omaha, Nebraska. Tennessee (38-19) is the No. 2 seed in the Chapel Hill (North Carolina) Regional that starts Friday.

The Vols reached three College World Series and went 699-396 in 18 seasons under former coach Rod Delmonico, who made a congratulatory phone call to current coach Tony Vitello this week. Delmonico was fired in 2007, and Tennessee has struggled since.

Todd Raleigh was fired in 2011 after going 108-113 in four seasons. The Vols then turned to Dave Serrano, who had led UC Irvine and Cal State Fullerton to College World Series berths but never earned an NCAA bid in seven seasons at Tennessee.

It was main reason for the skepticism Vitello faced when he took this job after the 2017 season.

"There was a lot of people that said, 'Hey it's a hidden gem,' and 'good luck,' and who were positive," said Vitello, a former assistant at Arkansas, TCU and Missouri. "But there were probably more people or a majority saying, 'Well, there's a kind of ceiling over there on how good you can get, Coach Delmonico had it one way for a while, but things have changed and other programs have changed in how they can do thing, and you're probably going to do just OK in the SEC even in a good year.'

"I don't believe all those things to be true. If anything, it's been a motivating factor for everybody in this building."

Tennessee served notice this season would be different by starting 15-0. The Vols went 14-16 in the Southeastern Conference, posting their highest league win total since 2005.

"I don't think we've surprised ourselves at all," reliever Redmond Walsh said. "We've surprised a lot of people outside the conference, but we knew how good we were and what we were capable of."

"One of the things we've seen from Tennessee in recent years is really good preconference records, and then they get in conference play, they take a couple of punches and they don't maybe ever quite respond," Burke said "This year, they got swept by Auburn to start conference play, and you're kind of wondering, 'OK, is this here we go again?' (But) they just hung in there."

When Tennessee reaches the postseason, it often stays a while. The Vols made the College World Series in four of their nine previous NCAA Tournament appearances.

Tennessee's chances of getting to Omaha this year could depend on whether its pitching regains its early season form. The Vols had a 2.68 team ERA in late April that has since risen to 3.60. The status of left-hander Garrett Crochet is uncertain after he injured his jaw the final week of the regular season.

The Vols also must learn from their one-and-done performance at last week's SEC Tournament. Vitello said the postseason atmosphere may have put the Vols "on our heels a little bit" last week.

"It doesn't matter if you're boxing or doing anything else in sports, (being on your) heels is probably not a very good position," Vitello said. "Heels are for models."

Tennessee could encounter different types of heels this week, as the North Carolina Tar Heels are the host team and top seed. The Vols first must face No. 3 seed Liberty (42-19) on Friday night.

The Vols are embracing their underdog status.

Vitello believes the demands of the SEC provide ideal preparation for the postseason and noted how Mississippi State went from the NCAA Tournament bubble to the College World Series last season. Vitello's players have similar confidence.

"I don't think we're done yet," Walsh said. "As a team, we have higher expectations than anybody else had for us all year."