State of the Hogs: Bullpen key to regional success 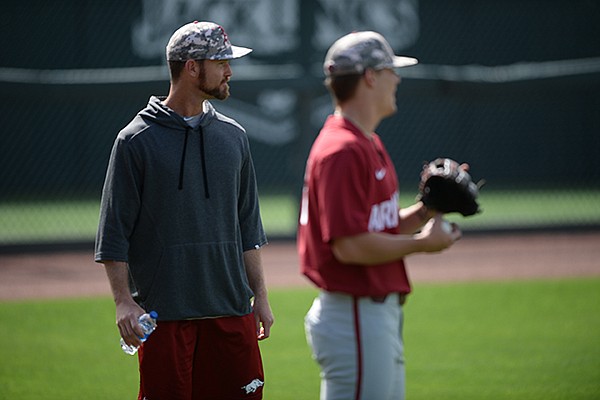 Arkansas pitching coach Matt Hobbs (left) watches Thursday, May 30, 2019, as his staff warms up in the outfield during practice and walk-through ahead of today's NCAA Baseball Regional at Baum-Walker Stadium in Fayetteville.

FAYETTEVILLE — Starting rotations are important. Everyone knows the starter sets the stage in college baseball. Without good starters, everything turns bad in a hurry.

But it’s not what I wanted to talk about in advance of the NCAA Fayetteville Regional. Arkansas meets Central Connecticut at 1 p.m. Friday in the tournament opener.

Arkansas pitching coach Matt Hobbs was a willing participant in my discussion about the value of the bullpen in regional baseball tournaments.

“The team with the best bullpen is the one which will be walking out of here with the victory,” Hobbs said just after the Razorbacks finished their workout at Baum-Walker Stadium.

And, that’s a strength for Razorbacks, although they didn’t hold leads against Georgia and Ole Miss in the SEC Tournament. They were up 1-0 against Georgia in the seventh inning, but lost 3-1. They led the Rebels 2-1 in the eighth, but lost 3-2 in the elimination game.

“No one is ever perfect,” Hobbs said. “It’s amateur baseball and everyone struggles from time to time.

“But our bullpen has been really good most of the season. I have a lot of confidence in them. We’ve got maybe six down there that have really been good.”

Of course, closer Matt Cronin is one of college baseball’s best. He was second-team All-SEC. He set the school record with 14 saves last year and has 11 this season.

Cronin’s out pitch is a 96 mph fastball, but he’s trying to work in a sharp breaking curve. If he can land that second pitch, it might not be fair.

“He’s worked on it a lot over the last several weeks,” Hobbs said. “And, he’s used it some, but most of the time when he’s been in games, it’s not like it’s a chance to just work on it. He’s in a leveraged position.”

Translation: ducks are on the pond and the game is on the line. You don’t test pitches in that situation.

“He’s got one of the best fastballs in college baseball,” Hobbs said. “It’s the pitch that hitters have to pick to look for. If they don’t, they’ve got no chance. And, with the curve, it gets tougher.”

It gets a lot tougher.

“His last three bullpens, it’s looked really good,” Hobbs said of the Cronin breaker. “Those are midweek bullpens. He had a chance to work on it this week in his last bullpen. That’s really helped, getting more work with it. (The curve) is getting noticeably better.”

The Hogs need everyone to be sharp out of the bullpen. That means effective outings from Kevin Kopps, the most used reliever on the team with 27 appearances. Kole Ramage is next with 23. Marshall Denton (22), Zebulon Vermillion (20) Jacob Kostyshock (19) and Cody Scroggins (15) will all get a turn this weekend.

There may be more in the tank than the regular weekend relievers. Back-up catcher Zack Plunkett continues to hone his pitching skills. Hobbs said a recent bullpen session produced a 97 mph fastball.

“ He’s only pitched to live batters once,” Hobbs said. “He’s certainly got the arm strength. He’s working on a slider. One time it’s good, next time it’s not.”

Could Plunkett get into a regional game?

“I would never say never,” Hobbs said. “Anything can happen in baseball.”

Before that, several regulars in the bullpen will get multiple chances. Kopps pitched twice most SEC weekends. He’s counting on a bounce-back tournament after walking two batters against Ole Miss in the elimination game.

“I worked on some things this week after that game,” Kopps said. “I should be good. I don’t remember walking batters like that. It’s never happened before and I was extra frustrated. That’s uncharacteristic.”

Hobbs said it’s typical after coming back from Tommy John elbow surgery. Kopps missed last season but has been solid with a 6-3 record and 3.33 ERA.

Hobbs explained that recovery from surgery is a long process. Even in the first 18 months back, velocity and movement might be there, but location command comes and goes.

“Really, he’s been good all year,” Hobbs said of Kopps. “He keeps getting better. His stuff has always been there. I just think it’s the issue coming back from surgery. You see a lot of walks coming out of Tommy John.

“But he’s not had too many and he’s been such a valuable piece to our bullpen all year. We’ve used him a lot.”

Ramage was superb early in the year, then hit a wild streak.

“Kole has been back to the way he pitched early the last three or four outings,” Hobbs said. “He’s looked very good.”

Kopps, one of the team leaders, has noticed Ramage’s return to form.

“It’s his fastball,” Kopps said. “It’s really been good lately and that makes that changeup unbelievable. He’s one of my catch partners. I love catching that changeup. It just goes dead and it feels heavy hitting your glove.”

Kostyshock is one of the keys, too. He features a sinking fastball that can touch 97 mph on the radar gun. He missed a couple of weeks with a sore arm, but claims to be 100 percent now.

The junior right-hander is sporting a clean-shaven look for the regional. He removed a scruffy goatee.

“It’s the new me,” he said. “It’s a point in the season I needed to reset everything. Plus, it was starting to itch when I got sweaty. It was awful.”

The discussion returned to what Hobbs said was the key to regional success, a strong bullpen.

“I think we have a great chance to meet his expectations,” Kostyshock said. “I think we are pretty strong there.

“I’ve seen some comments lately about (the bullpen). People think we are weak.