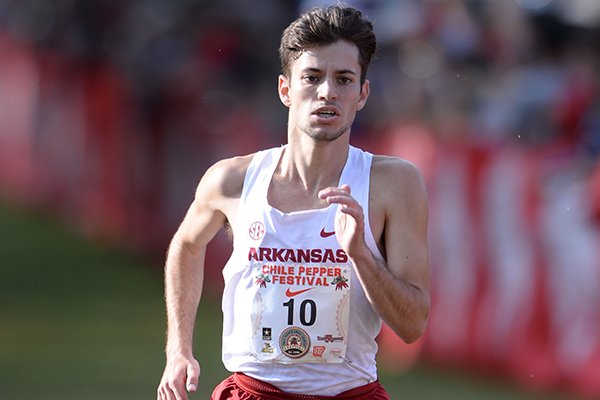 Arkansas' Matt Young comes in to the finish line Saturday, Oct. 5, 2019, to take fourth place in the men's collegiate race during the Chile Pepper Cross Country Festival at Agri Park in Fayetteville.

Razorbacks Coach Chris Bucknam has decided to redshirt Boit -- who will be a senior next year -- with an eye toward having a stronger team in 2020.

"It's a tough call," Bucknam said. "The first concern is the kids on your team that have to battle without Gilbert.

"There are seniors running their last conference cross country season, but we look at this as a three-round fight with cross country, indoor and outdoor [track and field], and those kids will be on the track with Gilbert in the winter and spring time."

Bucknam, who led the Razorbacks to eight consecutive SEC titles from 2010-17 before Ole Miss edged them 36 to 44 last year, said he doesn't believe Boit would make the team significantly stronger today, but that Arkansas should be much improved next year with a healthy Ryan Murphy to go with Matt Young, a promising freshman class and some recruiting additions.

"Our goal is to win the national championship and win the SEC title," Bucknam said. "How well [Boit] has done and the fact he does have a fifth year in cross country, we're going to shoot for a better day. Press the reset button a little bit in cross country. We felt it was the right move."

Ole Miss is ranked No. 11 nationally in the coaches poll going into today's 8,000-meter race at the Kentucky Horse Park in Lexington, Ky. Arkansas is ranked No. 35.

"Ole Miss is certainly the favorite," Bucknam said. "But we're taking a shot at them. They definitely have a target on their back. The goal is pretty easy to find them and try to beat them."

Young, a junior, will lead Arkansas in today's race. Murphy, a sophomore, is running his first race the season after coming back from a foot injury.

"Murph is 100 percent fitness-wise," Bucknam said. "I'm not sure he's 100 percent race-wise. We got a clear all-go [medically] and he's going to give it a shot. Matt Young is obviously our No. 1 guy. He's running great."

Also running today for the Razorbacks along with Young and Murphy will be seniors Carter Persyn, Preston Cates and Graham Brown and freshmen Jayce Turner and Myles Richter.

"We're not going to lay down," Bucknam said. "You've got to run the race and anything can happen."

Bucknam pushed in the conference coaches' meeting to have today's meet televised on the SEC Network, and that's happening with both the men's and women's races.

"It's great," Bucknam said. "There's nothing like a championship event on live TV."