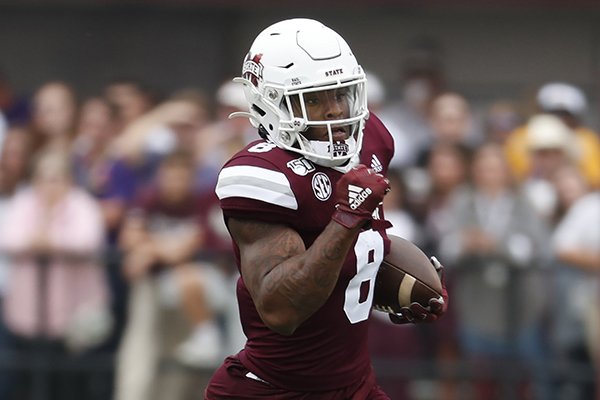 FAYETTEVILLE -- Mississippi State lost its fourth game in a row last week at Texas A&M, but it wasn't due to a lack of production from its offense.

Garrett Shrader, a 6-4 freshman, fired a career-best three touchdown passes in his third career start while accounting for 258 total yards in Mississippi State's 49-30 loss to the Aggies.

Shrader and SEC rushing leader Kylin Hill are the Bulldogs' dynamic duo as they head into Northwest Arkansas for a 3 p.m. game Saturday against the similarly struggling University of Arkansas (2-6, 0-5 SEC) which has lost five games in a row.

Shrader surged past returning quarterback Keytaon Thompson and graduate transfer Tommy Stevens to win the starting job midway through October. Stevens went 6 of 11 for 67 yards with 2 interceptions in the first half of a 20-10 loss at Tennessee on Oct. 12, and Shrader has thrown all 68 Mississippi State passes since.

[Video not showing up above? Click here to view » https://www.youtube.com/watch?v=5b3MOjTGHpM]

"They've got a freshman quarterback that's starting to play good football for them. They'll be a big challenge for us, but a big opportunity at the same time."

"He's very much a [run-pass option] guy," Arkansas Coach Chad Morris said, referencing the run-pass option attack. "Coach Moorhead has been one of the brilliant offensive minds in college football and being very creative in how he does things. A lot is very similar to some of the things that we do.

"It's not just one-dimensional. There's always two dimensions to it, two and three. But they do a good job of even falling into some of their quarterback run game late when maybe the bubble screen on the edge is not there."

"He will use his feet," Arkansas defensive tackle T.J. Smith said. "He's different, where they do trust him to throw the ball a lot. Different from how it was last year, when it was a whole lot of run and not a lot of pass."

Said Arkansas linebacker Hayden Henry, "He's done a good job. For a freshman, I think he's stepped up and done a tremendous job for them. He's not afraid to pull it. He's got good speed. Like I said, he's dangerous in the open field, so we're going to have to take care of that and try and manage him as best we can."

Containing the edges of their defense has been a chore for the Razorbacks for large parts of the season. While they limited the damage done by strong running quarterbacks like Ole Miss' Matt Corral and Texas A&M's Kellen Mond, the Hogs were punctured by Kentucky receiver turned quarterback Lynn Bowden Jr. for 196 rushing yards and two touchdowns in a 24-20 loss to the Wildcats on Oct. 12.

Hill has five 100-yard rushing games this season, including 197 in the season opener against Louisiana-Lafayette and 150 at Texas A&M last week.

Turnovers have been an issue for the Bulldogs' quarterbacks. Shrader has thrown five interceptions after Stevens fired four. The nine interceptions for a team rank behind only Arkansas' 12 interceptions in the SEC.

"With the quarterbacks and the interceptions, that comes down to decision making and accuracy and knowing when it is better to take a sack or throw it away instead of trying to throw it in an ill-advised spot," Moorhead said.