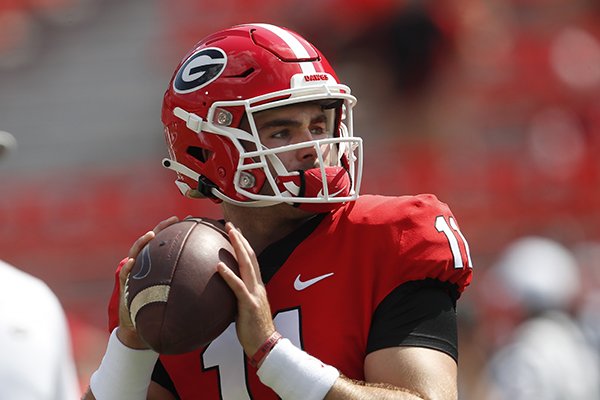 While most of the attention will be focused on Jacksonville, Fla, there is still great interest in what will happen Saturday afternoon in Fayetteville.

No. 8 Georgia and No. 6 Florida play their annual game in Jacksonville. Each has one loss in the SEC East, so the winner moves closer to the SEC Championship Game in Birmingham, Ala., against LSU or Alabama most likely.

Meanwhile, Mississippi State (3-5, 1-4 SEC) and Arkansas (2-6 0-5) see their game as winnable and a chance to at least temporarily keep their bowl hopes alive. A loss by the Razorbacks again eliminates them from postseason play.

Mississippi State’s Joe Moorhead, who like Bret Bielema, had never lived in the South, and Chad Morris are on seats that are warm and could get hotter.

After two weeks against teams much better than them — Auburn and Alabama — the Hogs come home for two games they have a shot to win.

Had another decent week picking games, going 5-1 to bring the season total to 61-19. The games are picked straight up and not against the spread.

The Bulldogs, who are a 7 1/2-point favorite — a slap in the face to the Razorbacks — are riding a four-game losing streak, although the Hogs have lost five straight (two of which could have been won). There are two things critical for the Razorbacks if they are every going to snap out of this slump. First, they have to take the field believing they can win instead of hoping they will. Second, every Razorbacks player needs to look at last week’s game and see how Treylon Burks played. On Nick Starkel’s mishandled Shotgun snap that resulted in a fumble, Burks made up 10 yards and tackled the Tide player who was trying to scoop and score. On Starkel’s 84-yard pick-six, Burks came from across the field and caught the guy at the goal line. That speed combined with his heart makes him a weapon. There are others who show that same fighting Razorback spirit. Anyone who has given up needs to go home. Arkansas 24-21

The Red Wolves burst back into their winning ways last week and need just two victories to get bowl eligible again. There has been no drop-off on offense for ASU as Layne Hatcher has stepped in seamlessly at quarterback. The problem that has plagued the Red Wolves is defensive injuries. Louisiana-Monroe is better at home than on the road. Arkansas State 35-24

Gus Malzahn resumed calling the plays for the Tigers, and that’s where they are struggling. Their defense is good, especially up front, but they most recently have struggled on offense. The Rebels have lost consecutive games they could have won. Auburn 21-20

Georgia vs. Florida (in Jacksonville, Fla.)

The Bulldogs have been inconsistent on offense. Their only loss was to South Carolina, and the Dawgs had three interceptions in that game. The Gators are a bit of a surprise team, but once they got down to their third-team quarterback they have improved. Georgia 27-24

The Vols need to get bowl eligible or head coach Jeremy Pruitt may be headed to the unemployment line. Tennessee 35-14

The Aggies get bowl eligible, and they should. Head coach Jimbo Fisher is making more than $1 million per win and is tied for third in the SEC West. Texas A&M 35-10

The Gamecocks inch closer to becoming bowl eligible but not without a fight. South Carolina 27-24