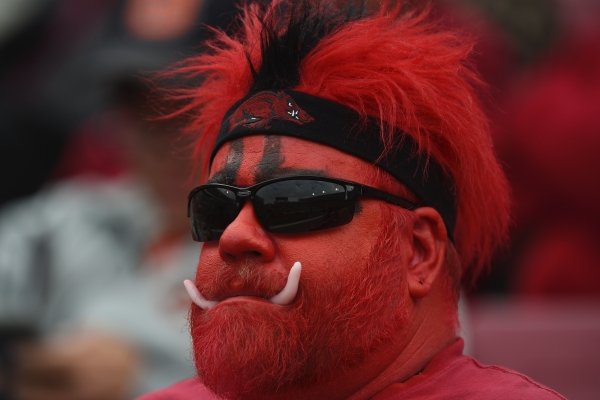 A selection of comments from the message boards at WholeHogSports.com:

Comments about players making plays in the Alabama game

razorgator: We always blame Chad Morris. Snap the ball. Catch the borderline snap. Don’t throw to a covered up receiver in front of the linebacker. Catch a great back-shoulder throw on third down. Players gotta make plays at some point. There was nothing wrong with this game plan.

hawgcotton: Youth is part of issue but lack of talent is the biggest issue. Talent includes ability to learn game plan assignments, playbook and then be able to execute it in a game situation. Coaches can only simplify things so far and can only wait so long to see it the players will grasp it.

MattJones: I think the next few weeks will tell us a lot about the coaching ability of this staff because Arkansas should be able to compete with three of the last four similar to the way it did Texas A&M and Kentucky. Will it? Can it close out a close game if it is in one? We’ll see. The last two games were decided on signing days. It will probably take Arkansas a long time to catch either of those teams.

borehog: Absolutely it will! We just need some wins. Outside of LSU, we have the potential to win the other three games. That will help immensely!

Baumbastic_Hawg: If you watched the game through to the end, you heard Greg McElroy talk about the status of the Arkansas team. He stated that the team was much better now than it was a year ago. He also stated that the lines were not there yet. I’m convinced that is coming. It won’t be easy, but I do think it will happen. Improvements needed on defense to make the program competitive.

jhawg: Most teams have pretty salty offenses, but how many have butt-kicking defenses? Look at Auburn. They have a mediocre offense this year, but … they went down to LSU and played very well … Auburn has a stout defensive front … Arkansas, in its best years, always had stout, hard-hitting defenses.

superhawgfan: I’ve always said it and will always say it. Defense wins championships. Defense must be better if we want to be a better team. The top teams in the SEC play very good defense. They may have high-powered offenses as well, but the defense is always good.

jacksonreid: Outstanding …a phenomenal player the last half of 2015. Really fun to watch.

coloradohog: Happy for Brandon. But, the Donkeys are bad on offense with a very poor offensive line (where have we seen that?). … Hope Brandon has a good game, but fear for him …

sachawg: With his Arkansas time, he never had an OL and was on his donkey more than off his donkey, so it should feel about how it’s always felt. Haha.

razormac: From the tweets I have read, the Bronco faithful are sick of Joe Flacco. … I hope Brandon gets some time. I remember him being deadly accurate his senior season and running off strings of completions.

DudleyDawson: I wish I had taken all those bets about BA never being on an NFL roster and certainly never playing a game in the NFL.

coloradohog: The news out (of Denver) is that Flacco could be out for the season and certainly out for more than one game. Brandon will certainly have his chance. … I wish he was getting his chance behind a better line, but he is not.

Baumbastic_Hawg: Unfortunately, he is used to that.

ClayHenry: Who would have thought Brandon Allen would be a starting quarterback in the NFL and Ryan Mallett would be sitting at home?

sonnyhogsdale: 28-7 Bulldogs. Mobile quarterbacks have (their) way with the Hogs.

jacksonreid: MSU’s defense is absolutely decimated in the secondary (and) playing a true freshman at QB who is limited in the passing game. If Arkansas team is ever going to win an SEC game and Morris finally get a P5/SEC win, this is it. MSU 27, Arkansas 23.

coloradohog: Arkansas has every reason to win this game as was mentioned in the comments above, but they seem to find ways to lose. This is for the bottom of the SEC and I believe the Hogs will do everything in their power to hold onto that coveted spot. MSU 31 (Hogs defense cannot stop anyone as per usual), Hogs 9 (Hogs offense has no idea what a TD is).

lovemyhogsforever: Defense will once again make the opposing QB look like an All-American. CCM will go with either Ben Hicks or Nick Starkel instead of John Stephen Jones. MSU 24, Hogs 10.

sdhog: Hogs score late to tie the game only to watch MSU march down field and kick a winning field goal. MSU 31, Hogs 28. CCM is fired on the spot and football experts from Wholehog Sports forums take over the team and recruiting for the remainder of the year.

Hogmodo: I predict that John Stephen Jones generates enough offense that we score 31 and our defense is not exhausted in the fourth quarter and we hold MSU to 28. … The Hogs carry this momentum to beat Western Kentucky and upset Mizzou for a five-win season and enough improvement over last year for Chad Morris to have a good recruiting class to add to the good haul last year. The turn around will have officially begun this Saturday.

harleyhawgidson: MSU 31-21. Hogs blow a 21-10 halftime lead while going scoreless in the 2nd half with five consecutive three-and-outs.

longtimehog: Arkansas 56, Miss. State 3. State fans and players are heard muttering after the game, “We needed more cowbell.” After the game, the entire State spirit squad announces they are transferring to Arkansas and are entering the transfer portal immediately. Fortunately or unfortunately, depending on your perspective, they all have sick relatives near Fayetteville and are declared immediately eligible by the NCAA.

razorwill: Comedy of errors is all I see from us across the board. …We don’t win. We don’t know how to win. Running QB? Enough said. We cannot stop one to date. We need about 10 more Treylon Burkes on the field. Might cover the spread, but until proven otherwise: MSU 31, Hogs 27.

poochpunt: JSJ drives the Hogs 98 yards in the closing seconds for potential winning score. Hogs call timeout sub new QB. He fumbles the snap and Mississippi State holds on for a four-point win.

adven2r: Well, I’m putting on my rose colored glasses. Now I see JSJ playing well both in the passing game and with his legs. I see the O-line struggling against MSU defensive line but JSJ making quick decisions and managing to move the sticks. O’Grady and the receivers are going to help JSJ. Arkansas 31, MSU 28.