You never know where Canaan will land 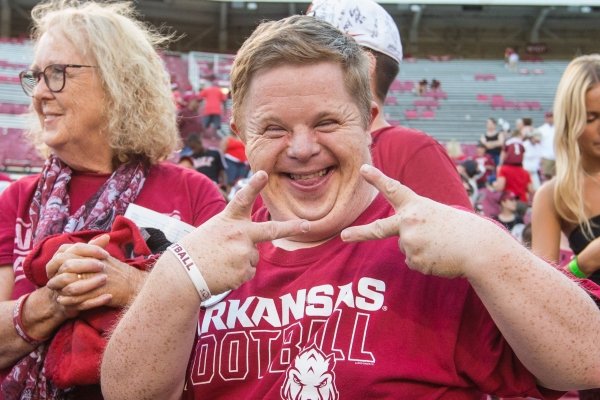 There is no doubt that some frustrated Arkansas football fans have leaped headfirst off the bandwagon and given up on the season.

That’s to be expected when the program is 2-6 this season, has won only 8 of its last 34 games and is riding a 16-game SEC losing streak.

But that is not the case for Arkansas super fan Canaan Sandy and his mom Ginger, who make trips from their home in Cave City every Friday night to see high school football recruits committed to or being targeted by the Razorbacks.

The duo and their friends have spent this week trying to get fans who are not planning on using their tickets to today’s Arkansas home game against Mississippi State to give or sell them to fans who want to attend the game.

“We are calling it #FillTheHogpen,” Ginger said. “We are just encouraging the fans to do their job. We have a job as fans, just like the players. We can either help this team advance or help it implode.

“We want people to get to the game and show those boys we love them. I know a lot of people haven’t thought about it, but this is the last SEC game in Fayetteville for the seniors like Sosa (McTelvin Agim), CJ (O’Grady) and (De’Jon) Scoota (Harris) and all the ones that we have loved for so long.”

Canaan, who was inducted into the ESPN Fan Hall of Fame in 2013, and Ginger have been thrilled about the reception for their plan.

“We had over 300 requests for tickets from people wanting to go to the game in the first 24 hours after we announced it,” Ginger said. “There are so many people out there that can’t afford to go. There are a lot of people who want to go.

“Canaan and I were happy to go out and travel the state and gather the tickets up and people have also dropped them off at a radio station in Jonesboro, and a TV station in Fayetteville.”

Canaan has suffered a pair of strokes this year, but is doing fine now and he and his mom have continued their Friday night treks.

“They are the ones that are special,” Sandy said. “We are just there to watch them play, cheer them on and tell them how we want them to be Razorbacks.

“Friday night was a little different because we had possible Razorback players on both sides,” Ginger said. “That was a little awkward. We had to sit on our hands.

“We really, really try to not go to games where there are future Razorbacks playing on both sides, but Friday night we just had to do that. Canaan loves to cheer, but he did a good job setting on his hands and being neutral.”

There have been some de-commits lately in Arkansas’ 2020 class that has dismayed the pair.

The reception that Canaan gets has been as inspiring to him as he is to others.

“He is there for them and he is there as the fan,” Ginger said. “Sometimes we go and they announce that we have a special guest in the audience. We have had them save us parking spaces, not charge us to go in and lots of wonderful things like that. He just can’t wait to get there and start cheering for the players. It is always a great time.”

The pair then get to all the Razorback home games and as many away games as possible.

“It’s every week,” Ginger said. “There is never a bad day when the Hogs play. You never know who is going to show up this week. We are so excited to see each and every one of these young players get their chance and opportunity and what they are going to do with it.

“It’s sort of like a treasure hunt. You don’t know what you are going to see, so we are just excited. Canaan and I get to see old friends, new friends, fun travels and the only thing that is negative is that our team didn’t score more than the others.

“It is a fantastic day for us anyway.”