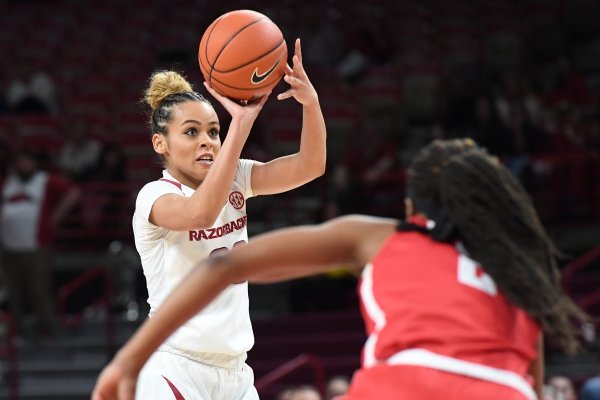 Image from Arkansas' 88-80 win over Houston Thursday March 21, 2019 at Bud Walton Arena in Fayetteville during the first round of the Women's National Invitational Tournament.

LAST SEASON: Started all 37 games and led the Razorbacks in rebounding, averaging 6.6 per game and blocked shots (1.5 per game). … Scored a season-high 15 points at Georgia and in Arkansas’ win over Houston in the Women’s National Invitation Tournament. … Grabbed a career-high 17 rebounds and blocked a career-best 7 shots at then-No. 17 Kentucky.

THE SKINNY: Despite being undersized, she will be a presence inside as a rebounder and defender and also has shown to be an outstanding passer.

LAST SEASON: Averaged 5 points and 2 steals per game while playing in 30 games off the bench last year. … Scored in double figures in four games, including five 3-pointers against Arizona State. … Missed seven games because of an injury.

THE SKINNY: Should again give good depth at the guard position and serve as a backup point guard.

THE SKINNY: Her athleticism and length should help make Davis an impact player as a freshman.

LAST SEASON: Averaged 10.2 points per game, including a season-high 22 against Arizona State. … Led the Razorbacks in scoring in seven games. … Made a team-high 77 3-point shots and played in 36 of Arkansas’ 37 games, averaging 24 minutes per game.

THE SKINNY: Showed the ability to make the perimeter shot and has worked hard in the offseason to improve her consistency.

THE SKINNY: Has a knack for getting past defenders and scoring inside and should help give the Razorbacks more size and length on the interior.

THE SKINNY: Should provide depth off the bench.

THE SKINNY: Has been the hallmark of consistency for the Razorbacks and should provide more of the same this season as a scorer, passer, rebounder and defender.

THE SKINNY: Should provide depth as a walk-on for the Razorbacks.

THE SKINNY: Averaged just under 10 points per game in each of her two season at TCU and shot 38 percent from 3-point range. … Should give the Razorbacks another perimeter scoring threat.

LAST SEASON: Played in all 37 games, averaging 17 minutes per game. … Shot a shade over 50 percent from the floor (51-of-101). … Averaged 5 rebounds per game. … Led Arkansas with 11 points against Prairie View A&M. … Grabbed 12 rebounds, her second game to reach double digits in her career, in a win over Wisconsin.

THE SKINNY: Returned in better shape this season and has improved quickness … Should again split time with Kiara Williams at a post position.

THE SKINNY: Gives the Razorbacks some much-needed size inside.

LAST SEASON: Played in 12 games but was limited because of an injury.

THE SKINNY: Continues to give the Razorbacks depth at the post position.

LAST SEASON: Set a single-season record with 759 points. … Earned second-team all-Southeastern Conference honors by the coaches and media. … Scored in double figures in 34 of 37 games, including six games of 30 or more. … Set a school record for an SEC game with 41 points against Auburn. … Became only the second player in school history to earn SEC all-tournament honors.

THE SKINNY: Comes in with preseason accolades being named first-team preseason all-SEC and third-team All-American after an outstanding first season at Arkansas.

THE SKINNY: Looks to help the Razorbacks with added depth off the bench.

THE SKINNY: Should help give depth at the point guard position and has the ability to also rebound well from that spot.

THE SKINNY: Looks to get more playing time this season off the bench for the Razorbacks.