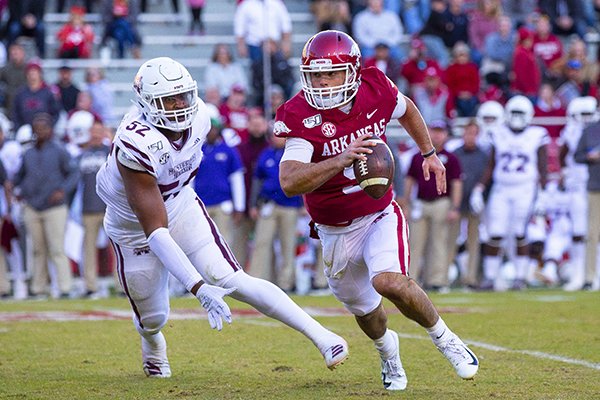 Jones, who has taken the majority of second-half snaps the past two weeks, will be the Razorbacks’ third starting quarterback this season and sixth starter in the past 20 games dating to last year.

"I think when you look at his prior performance when he stepped on the field the last two weeks, the moment has not been too big for him," Arkansas coach Chad Morris said. "I think he did a great job of providing grit and toughness and I think he’ll play really well."

Jones will be backed up Saturday by true freshman KJ Jefferson, who made his college debut during the Mississippi State loss. Jefferson led a four-play, 75-yard drive that included two runs for 26 yards and a touchdown, and a 32-yard completion to Treylon Burks.

Ben Hicks has started four games and Nick Starkel has started five games this year for the Razorbacks, but neither are listed on the depth chart for the Western Kentucky game.

Arkansas has struggled to find consistency at the quarterback position in two seasons under Morris. The team’s three starters last season left the program during the offseason - Ty Storey for Western Kentucky, Cole Kelley for Southeastern Louisiana and Connor Noland for the Razorbacks’ baseball team.

Storey’s nine starts are the most for an Arkansas quarterback under Morris. He has started five games this season at Western Kentucky and is expected to start Saturday against the Razorbacks.