King: Picking Arkansas a roll of the dice 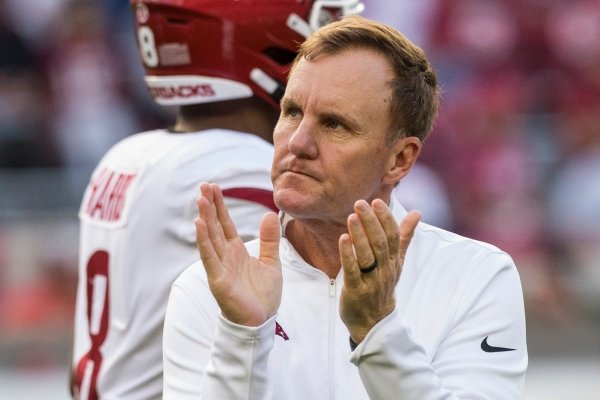 Chad Morris, Arkansas head coach, greets players during warmups before the game vs Alabama Saturday, Oct. 26, 2019, at Bryant-Denny Stadium in Tuscaloosa, Ala.

LITTLE ROCK — Obligated to justify picking Arkansas 27, Western Kentucky 24 before the prediction could be published, the explanation is both a cop-out and a sad comment on the state of Razorback football.

The assumption that SEC teams are better than their counterparts in Conference USA was cited. Period.

Not a word about the Razorbacks being more talented on either side of the ball.

The superiority of the SEC’s elite vs. the best in Conference USA is unquestioned. Think Alabama, LSU or Georgia vs. Louisiana Tech, Marshall or Florida Atlantic.

The SEC champion is a fixture in the College football Playoff. Generally, the Conference USA champion gets its pick of a handful of minor bowl games.

But, proclaiming the worst team in the SEC West is flat-out better than a C-USA team that is 4-2 in league play is dicey, an analysis underlined by the Razorbacks being favored by only 2.5 points despite playing at home.

Looking ahead, Saturday’s storyline is dominated by a homecoming, a unit with problems, an overhaul at quarterback and the potential for embarrassment.

Most Arkansas fans know former Razorback Ty Storey is a graduate transfer who is throwing passes for Western Kentucky. He played high school ball barely an hour from Fayetteville, attempted 250 passes for the Razorbacks last season and transferred when it became clear that he did not figure prominently in Chad Morris’ plans.

Since replacing the Hilltoppers’ injured starter, Storey has posted impressive numbers, albeit against competition something less than SEC caliber. In fact, he completed 70 percent or more in five straight games before Saturday’s loss to Florida Atlantic. Even then, he was 32-of-47 for 380 yards, but suffered two interceptions.

Arkansas’ pass defense ranks a respectable 64th nationally in passing yards allowed with 222.2 per game, but that ranking can be misleading. For example, both Auburn and Mississippi State attempted only 19 passes vs. the Razorbacks because they ran for 758 yards while scoring 105 points.

Those numbers serve as a segue to the Arkansas defense.

On Saturday, Mississippi State’s run-first attack broke program records for total offense and most yards rushing vs. an SEC opponent. For those keeping tabs, the numbers were 640 overall and 460 rushing.

The SEC’s leading rusher, Kylin Hill, totaled 198 yards on 13 carries in the first half alone against an Arkansas unit that was 13th in the 14-team league in rushing defense.

Arkansas’ defense was so bad that the Bulldogs put together five touchdown drives of 66 to 84 yards and none of them lasted more than six plays.

Early on, the TV crew pointed out the unit was second in the SEC in missed tackles per game and whether that goes to coaching and/or personnel is up to those in charge of the UA program.

Morris’ decision to start redshirt freshman John Stephen Jones and promote pure freshman KJ Jefferson to No. 2 is applauded, but expectations should be tempered by reality.

Both Jones’ 6-of-7 for 49 yards and a touchdown vs. Alabama and Jefferson’s 21-yard run and 32-yard pass in a 75-yard touchdown drive vs. Mississippi State occurred when both games were out of hand. It is difficult to determine how a big lead affected the mindset of those in the game.

Still, Morris had nothing to lose by turning to the freshmen and a cynic might suggest that not only does he think they can help the Razorbacks win, but that playing both might encourage some fans to turn out to see the future of UA football.

Jones or Jefferson, improved run production from the quarterback spot is guaranteed.

Granted, rushing totals include yardage lost on sacks, but Ben Hicks, who started last week, has played in six games with 20 carries for two net yards. Nick Starkel is minus-16 yards on six attempts in seven games.

Look for both Jones and Jefferson to have a half-dozen or more carries with a positive bottom line, and that diversity alone improves the Razorbacks’ chances of avoiding an embarrassing upset.

Players from out of state probably don’t know or care a lick about football at the University of Central Arkansas about 2 ½ hours south of Fayetteville, but UCA held the Hilltoppers to less than 300 yards in a 35-28 victory in late August. Storey did not play in that game.

Still, if the Razorbacks lose Saturday, the ridicule will include the score and an in-depth comparison of statistics accumulated by both Arkansas teams.