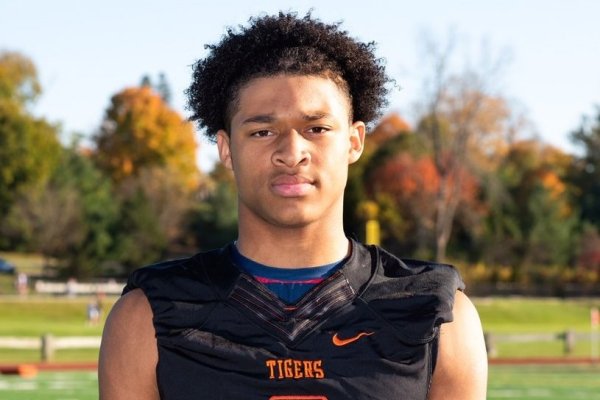 Cornerback Khari Johnson and his father, Bernard, traveled many miles through the air and on the road to make an unofficial visit to the University of Arkansas for the Mississippi State game on Saturday.

Johnson, 6-1, 183 pounds, 4.49 seconds in the 40-yard dash, of Suffield (Conn.) Academy, flew from Boston to Dallas on Friday and left at 4 a.m. on Saturday and drove five hours before arriving in Fayetteville at 9 a.m.

"The visit was amazing, the atmosphere was everything I expected and more," Johnson said. "The fans were jumping. It was great crowd for homecoming. The coaches were warm with their hospitality."

He and his father learned quickly about the Walmart's world headquarters being in Northwest Arkansas and the Sam M. Walton College of Business.

"Walmart has a huge impact," Johnson said. "Their business school is a amazing. The amount of alumni that gives back to the school is just overwhelming."

Johnson has scholarship offers from Southern Mississippi, Navy, Bryant, Wofford and others, but is receiving interest from Arkansas, Pittsburgh, Illinois, Michigan State and others.

He was able to talk to safeties coach Ron Cooper and cornerbacks coach Mark Smith.

"They asked me to come back for an official [visit]," Johnson said. "So I'm really excited about that. Coach Cooper was really warm with me.

"He told me he loved how physical I looked on film. I looked really big and long in person which he was delighted to see. It was really good feedback from the coaching staff."

Johnson has recorded 25 receptions for 514 yards and 4 touchdowns, and 8 rushes for 49 yards and a score on offense. Defensively, he's recorded 35 tackles, one tackle for loss, 3 interceptions, one returned for a score, 10 pass breakups and 2 forced fumbles in 7 games.

He and his father were given a tour of the campus by volunteer coach Shaun Mercer and came away impressed with the Old Main and Fay Jones School of Architecture buildings.

"The architecture was something I've never experienced," Johnson said. "That was cool to see."

The facilities wowed Johnson, including the locker room.

"To see a barber shop in a locker room, that was dope," Johnson said. "The mirror when you stood in it, it reflected a sign that said 'The only competition is yourself' which I thought spoke volumes."

Johnson and his father arrived back in Dallas on Sunday around 3:30 p.m. for a 7 p.m. flight to Boston. Despite being fatigued, Johnson said he and his father were grateful for the opportunity to visit Arkansas."My dad simply put it as 'It doesn't get better than SEC football,' " Johnson said. "He was right, it was a great experience. He liked it just as much as I did."

They finally made it back to Boston at 11:23 p.m. Sunday night, but Johnson wouldn't have it any other way.

"This is a can't-miss trip for us, it was amazing," Johnson said.