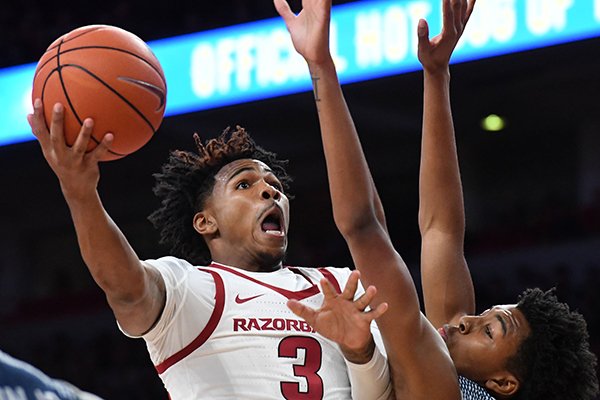 Arkansas guard Desi Sills goes up for a shot against Rice guard Trey Murphy during a game Tuesday, Nov. 5, 2019, in Fayetteville.

FAYETTEVILLE — It is no secret that Arkansas is going to be an undersized basketball team.

The lack of height ended up not affecting the Razorbacks, who won the rebounding battle 45-27 and cruised past Rice on Tuesday night, 91-43.

“We’re trying to out-react people because we’re a little bit smaller, so that’s what we’re going to have to do,” Arkansas coach Eric Musselman said. “I thought the effort tonight was great. We’ll see how it is against North Texas.”

Musselman was coaching in his first game for the Razorbacks since taking over for Mike Anderson, who was fired on March 26 after eight seasons.

Mason Jones had a career high 32 points for the Razorbacks, while Isaiah Joe had 24 points and seven assists.

“We came in ready to play,” Jones said. “We really took this week hard. The coaches stayed on us. They didn’t let us relax, and they told us to take Rice like we were playing an SEC team.”

Arkansas shot 55 percent from the field, including 21 of 34 in the second half, and outscored Rice 42-26 in the paint.

The Owls turned the ball over 27 times and only managed to shoot 29% from the field and went 0 for 12 from behind the arc in the second half, finishing the game at 8%.

“Defensively, the effort, we understand who we are,” Musselman said. “We talk about it all the time. We’re not big. We’re not dominant in the paint. I thought we were phenomenal going vertical, meaning straight up and down, making the defense inside the paint interior shoot over extended hands, not trying to block shots.”

The only glaring negative for Arkansas was 21 turnovers, but Rice was only able to convert them into 19 points.

“Some of them were unforced,” Musselman said. “It’s kind of been that way since I’ve been here. You know, that’s just one of our areas that we’re going to keep talking about.”

Arkansas: The Razorbacks were picked to finish 11th by the league’s media back in mid-October in a league that expects to send six or even seven teams to the NCAA Tournament.

Jalen Harris’ shooting was much maligned a year ago, but the point guard came off the bench for Arkansas and was 3 of 4 from the field and made both 3-pointers he took, finishing with 10 points.

Arkansas forward Connor Vanover’s status had been in limbo until a few hours before tipoff on Tuesday, when the NCAA said that his waiver request had been denied and he would be ineligible for the 2019-20 season after transferring in from California.

Musselman sent out a statement before the game that sophomore Reggie Chaney had been suspended indefinitely.

Chaney, a 6-foot-8 forward, averaged 5.4 points, 3.5 rebounds and 1.4 blocks last season. He will be allowed to practice with the team until he meets the terms of his suspension.

Arkansas: The Razorbacks host another Conference USA foe in North Texas next Tuesday in Fayetteville.

Rice: The Owls host Pennsylvania on Saturday, who just upset Alabama in Tuscaloosa on Tuesday

The Razorbacks raced out to a 20-point halftime lead behind 17 points from Jones, then piled it on with a 52-point second half. Joe and Jones combined for 31 second-half points.

Rice struggled mightily on the offensive end, shooting 28.6 percent for the game and 2-of-25 (8 percent) from 3-point range. The Owls turned the ball over 27 times in the loss, 15 times in the second half. Three players totaled four-plus turnovers.

We will have much more from tonight's game later on WholeHogSports.com.

Mason Jones is flirting with a career scoring night. He has 27 points. He scored 30 twice last season against Florida and Mississippi State. Isaiah Joe has 24 points as well on 10-of-18 from the floor.

Arkansas has 19 assists tonight on 33 buckets, but Eric Musselman is not going to be happy with the turnovers figure again. The Razorbacks had 18 in each of their exhibitions. Joe has 5 of his own while Adrio Bailey and Desi Sills have three each.

Jalen Harris is the only other Arkansas player in double figures with 10.

Jalen Harris, who made just nine 3-pointers all of his redshirt sophomore season, has hit both of his triple tries tonight. His second came from the top of the key. As he was backpedaling to the other end, he motioned as if he were strumming a guitar. He has nine points, three rebounds and a pair of steals tonight.

Isaiah Joe also buried his fourth 3 of the night. Jimmy Whitt, following a miss from 3 on Rice's offensive possession, found Joe on the right wing wide open. It was a terrific find by Whitt and showcased his patience and vision in transition.

Arkansas with another big spurt, this time it's 9-0 to push its lead to 38. Everything is coming easy on the offensive end for the Razorbacks and the Owls have been putrid on that end. Rice is 2-of-15 from the floor in the second half and 0-of-6 from deep. Combine that with eight second-half turnovers and it's no wonder this has gotten so out of hand.

Mason Jones has a game-high 23 points and Isaiah Joe has added 17 - nine in the second half.

Rice is 2-of-8 from the floor with four turnovers in the opening minutes of the second half, and Arkansas is taking full advantage. Isaiah Joe, too, has come alive from deep, knocking down 3-of-5 attempts. He has also assisted on two other buckets since the break.

After the Razorbacks began the second half on a 10-3 run, capped by Adrio Bailey's steal and layup on the break, Eric Musselman walked out to the SEC logo in the lane in front of the team's bench and urged the crowd to get louder. It is not the first time he's done that tonight either.

Obviously a great first half from Mason Jones, but the Razorbacks were stellar defensively. This is the first time Arkansas has held an opponent to 19 points or less in a half since Vanderbilt scored just 11 in Jan. 2013.

Jones has a game-high 17 points for the Razorbacks on 6-of-8 from the floor and 4-of-6 from deep. He also grabbed a game-high six rebounds in his 19 minutes.

Isaiah Joe added eight points in support of Jones and dished out three assists, too. He is 0-of-3 from deep with three turnovers, but is finding other ways to impact the game. He took a charge in the first half as well.

Rice finished the first half shooting just 32 percent and is 2-of-13 from 3-point range. The Owls turned the ball over 12 times. Ako Adams scored a team-high eight points.

All in all, that was a fun start to the Eric Musselman era.

A very impressive opening-night crowd is on its feet calling the Hogs after Arkansas reeled off six straight points (Isaiah Joe left-hand dunk, Joe midrange jumper, Mason Jones dunk off turnover) to push its lead to 15.

Joe's dunk was absolutely filthy. He caught in the right corner in front of the Rice bench, drove baseline then threw it down with the left. Jones' dunk, which forced the Owls to call for time, was kickstarted by a steal by Jimmy Whitt. Jones is up to 13 points on the night.

The Razorbacks have opened up their biggest lead of the night with guard Jalen Harris' first 3-pointer of the season, which came from the left side of the floor. Harris has four points, two rebounds and a steal so far.

Adrio Bailey added a layup in transition as well after a nice last-second dish from Desi Sills.

Arkansas held Rice without a point for nearly five minutes before Ako Adams got a layup to drop. The score broke a 14-2 Razorbacks run.

Mason Jones knocked down his fourth 3 of the night just before the under-12 media timeout. It was not the greatest shot - leaning to his left with a defender on his right hip - but he got it to go. He's definitely feeling it early.

Isaiah Joe added his first score of the season, too, to aide Jones' hot start. After the ball was swung from the right wing to the top of the key to the left wing, Joe caught in the corner and took two dribbles before lofting a floater up and in. He has just two points so far and a pair of turnovers.

Rice is shooting 36.4 percent through eight-plus minutes and is 2-for-8 from distance.

Terrific start to the season for Mason Jones, who has knocked down all three of his 3-point attempts - two from the top of the key. He also has a team-high three defensive rebounds. He certainly looks to be playing with a great deal of confidence.

Desi Sills has the only other bucket for the Razorbacks. Sills drove the lane and finished a layup at the rim around a Rice defender. Impressive move. I like his aggressiveness after a pair of early misses from 3.

For the Owls, Ako Adams has a team-high six points on 2-of-3 from deep.

News broke about 5 p.m. that Arkansas sophomore forward Reggie Chaney has been suspended indefinitely for a violation of team rules. He will not play tonight, but will be able to practice with the team until he meets the terms of his suspension, Arkansas coach Eric Musselman noted in a release.

Chaney averaged 5.4 points and 3.5 rebounds per game as a freshman with the Razorbacks.

Musselman also announced that the NCAA has denied a waiver for sophomore Connor Vanover to be eligible for the 2019-20 season. He will redshirt this season and have three years to play at Arkansas.