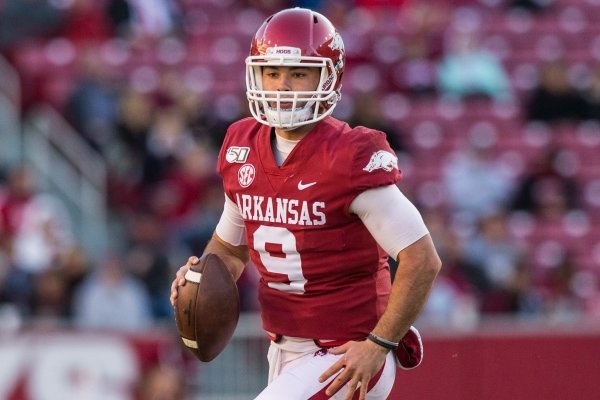 FAYETTEVILLE -- The University of Arkansas' youth movement down the stretch will feature a change at quarterback, where freshmen John Stephen Jones and KJ Jefferson are listed as the starter and backup for Saturday's 11 a.m. game against Western Kentucky.

Coach Chad Morris revealed the quarterback change during the opening remarks of his weekly news conference on Monday at the Smith Football Center.

"We'll start John Stephen Jones this week," Morris said. "I'm excited for him. We will play KJ as well and continue to develop him."

Offensive coordinator Joe Craddock said the details of playing time at quarterback will be ironed out during the week.

"We're still working through game-planning and all that," Craddock said. "We'll come up with a good plan to make sure they're both comfortable with what we're doing and making sure that they can execute the offense as a high level."

Do you agree with the decision to name John Stephen Jones the starter at quarterback against Western Kentucky?

Jones and Jefferson both led touchdown drives in Saturday's 54-24 loss to Mississippi State that dropped the Razorbacks to 2-7 overall and 0-6 in the SEC.

Jones, a redshirt freshman, engineered a 12-play, 59-yard touchdown drive, capped by his 11-yard strike to Mike Woods, on the second of his two series.

Jefferson led a four-play, 75-yard touchdown drive in his first series as a collegian, which began with his 21-yard keeper over the right edge and ended on his 5-yard scoring run.

"I'm excited about John Stephen and KJ," Morris said. "I think those guys, you felt the lift on the sidelines -- I know I did -- when they went in."

Morris said Jones and Jefferson took "all the reps" in Sunday evening's practice.

"When we got out on the field yesterday, or last night, guys were bouncing around and ready to improve and get better. ... With John Stephen and KJ, I think they're excited just to watch these young men and help them out."

Senior transfer Ben Hicks and junior transfer Nick Starkel split the starting job for the first nine games, with Hicks getting the nod four times, including the first two games and the loss to Mississippi State, and Starkel starting five of six games in the middle of the season.

Morris called Hicks and Starkel "fine young men" who love football, and said the decision to go with Jones and Jefferson involved a variety of factors.

"We couldn't get the consistency that we needed," Morris said. "But they were back in here yesterday and eager to help these young guys continue to grow and mature. And if their opportunity arises they're going to be prepared to step in there if it comes to that.

Arkansas' issues at quarterback are more magnified considering Western Kentucky will start former Razorback Ty Storey, a senior who transferred in the spring as a graduate. Storey has started the last six games for the Hilltoppers and is 141 of 202 passing for 1,477 yards, with 7 touchdowns and 5 interceptions.

Morris and coordinators John Chavis and Craddock all pointed out the abundance of contributing young players on the Arkansas roster during their Monday press conferences.

Chavis even waved a sheet of paper with Western Kentucky roster notes on it in the air when asked whether the Razorbacks are still "fighting" for him.

"They're fighting for us," Chavis said. "I'll give you an example. Look at Western Kentucky's roster. They've got eight or nine redshirt juniors starting for them. We've got five or six freshmen that are either starting or playing a lot.

"That's 18-year-old versus 22-year-old. That makes a difference. That's all I'm gonna say because I'm not an excuse maker. It falls on me and I've been in college coaching for 42 years and I've never been in front of anybody and made an excuse and I'm not gonna start today."

Chavis also made a pointed response when asked how, given all his experience, this Razorback defense has gotten to the point of allowing 640 total yards to Mississippi State.

"I think it's a combination of things," Chavis said. "Again, it comes back to us and me. Certainly let's just tell the truth. It was broken when we got here and we haven't fixed it quick enough. What we did Saturday was unacceptable.

"We can talk about how young we are, but I'm not going to make excuses. It doesn't matter. When we send them out there to play we expect them to play to a level that is acceptable here in the SEC and the University of Arkansas. It's my job to make sure they do."