Locked in: Defense sets tone for Hogs in season opener 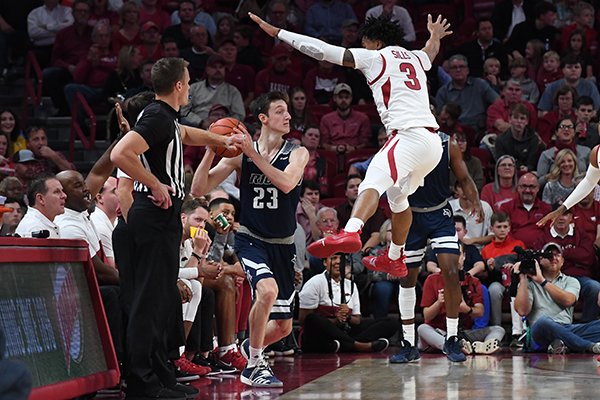 FAYETTEVILLE — At Arkansas' open basketball practice in Bud Walton Arena on Nov. 2, 10 white poster boards covered a majority of the face of the scorer's table between the two team benches.

At least half of them were filled with information regarding what Rice likes and wants to do offensively. They were complete with diagrams of go-to half-court sets and inbounds plays.

On Tuesday, the Razorbacks put all of that defensive preparation to good use and held the Owls down.

That gave way to a 91-43 victory in the first official game of the Eric Musselman era.

"Just going off this weekend’s practice, Coach put us in a real (good) situation with their plays," said Arkansas guard Mason Jones, who scored a career-high 32 points. "So the plays they were running today, we already knew them. We wanted to just be prepared for the game and take it serious. We want to take defense serious this year since we’re undersized.

"We’re all doing the little things this year. We’re all talking, we’re all doing stagger jumps. It’s just a lot that you didn’t see last year that you’re seeing this year, and we were glad we were ready to perform today."

After Rice, which lost its lone preseason exhibition game 89-83 to Division-II St. Edward’s last week, took an 8-6 lead just more than three minutes in on back-to-back Ako Adams 3-pointers, Arkansas turned it on on the defensive end of the floor. The Owls did not make another 3 the rest of the way - missing their final 22 attempts - and turned the ball over 27 times.

The result was the best defensive efficiency rating (51.4), according to KenPom analytics, of Musselman's college coaching career, which spans four-plus seasons and 145 games. He said the Razorbacks were locked in.

"We understand who we are. We talk about it all the time," Musselman said. "We’re not big. We’re not dominant in the paint. Defensively, I thought we were phenomenal going vertical, meaning straight up and down, making (them) shoot over extended hands, not trying to block shots.

"I thought we did a good job taking some charges inside the painted area, but we’re going to have to be a team that goes vertical and make people shoot over extended hands, and we did that tonight."

On top of a bevy of turnovers, Arkansas forced three shot clock violations. But the biggest positive, according to Musselman, was the Razorbacks' effort not only going after loose balls, but corralling them.

"We’ve got to run through the ball, and I thought we did a great job," he said. "I thought we were really aggressive. We’re going to have to win those 50-50 balls based on our lack of size."

Behind an explosive 17 points from Jones in the first half, the Razorbacks raced out to a 39-19 lead at halftime. It marked the first time since a January 2013 win over Vanderbilt that Arkansas limited an opponent to 19 or fewer points in a half.

Rice was held to 32 percent shooting before halftime and missed 11 of its 13 3-point attempts. It also turned the ball over 12 times. Overall, four Rice players finished with four or more turnovers, and Arkansas scored 29 points off the Owls' miscues.

Jones led the way with a career-high five steals as well.

Sophomore guard Isaiah Joe, who aided Jones with 24 points on 10-of-18 from the floor, was proud of the team's defensive intensity. What's more impressive is Arkansas was able to wreak havoc throughout despite being shorthanded following forward Reggie Chaney's suspension.

Rice scored at a 0.51 point-per-possession clip in the loss, according to KenPom.

"Everything starts on defense," Joe said. "You can’t get your offense going unless you play defense. The name of the game is stopping the other team. We knew that coming into the game if we could stop their key scorers, keep them off the glass and things of that sort, we were going to win this game."