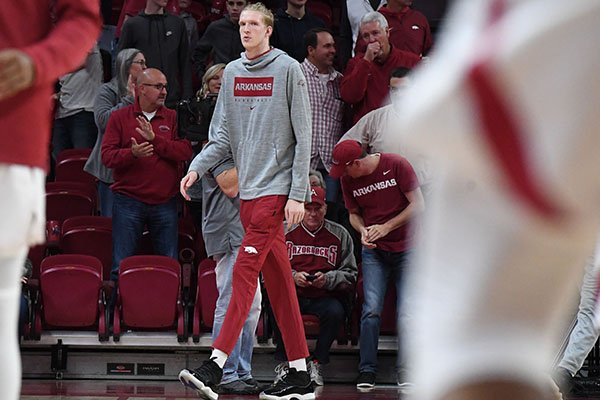 Connor Vanover is shown prior to a basketball game between Arkansas and Rice on Tuesday, Nov. 5, 2019, in Fayetteville. Vanover, a sophomore from Little Rock who played his freshman season at California, will have to sit out the 2019-20 season after his waiver for immediate playing time was denied by the NCAA.

FAYETTEVILLE — The NCAA denied Connor Vanover’s waiver to be immediately eligible at the University of Arkansas this season after he transferred from California in May, Razorbacks Coach Eric Musselman announced Tuesday night before Arkansas’ season opener against Rice.

If Vanover, a 7-3 forward from Little Rock, sits out this season, he will then have three seasons of eligibility remaining after redshirting.

Musselman was asked on his radio show Monday night about Vanover’s waiver, and he said the UA still hasn’t heard a ruling from the NCAA.

Vanover’s appeal to play this season after transferring to Arkansas was based on his grandmother’s illness and the added factor that Wyking Jones was fired as California’s coach after last season.

“I will say — and I don’t mind if it gets out, it’s not like it’s just between these closed doors — I think Connor’s got an incredible case to play,” Musselman said. “If it’s denied, I’ll strongly disagree. There’s other guys that have already been cleared.

“Some of them I know really well, and I know their situations extremely well. Sometimes [the NCAA rulings] all don’t make sense, because I’ve been personally with some of the guys at some of the other places.

“But having said that … our preparation has been without Connor. I’ve talked to Connor about this a lot, and if he doesn’t play this year, that’s OK. Because at Nevada [where Mussleman coached the previous four seasons] we had a lot of guys that were sitting out and they made tremendous strides.

“Our job if he does not play, is to really, really from a player development standpoint work with him every single day so that we have a piece next year that when I say huge — not just because he’s 7 [feet] plus — but a huge piece that can really, really contribute to us.”

“The waiting, talking to Connor, it’s kind of stressed him out so to speak,” Musselman said on his radio show. “And so he’ll be be glad when there’s some finality either way.”