Roundup from opening night of basketball in the SEC 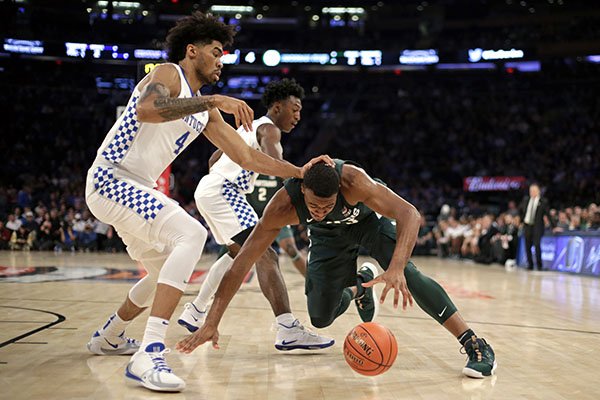 NEW YORK — Tyrese Maxey, Kentucky's latest freshman star, scored 26 points and the second-ranked Wildcats opened the season with a 69-62 victory against No. 1 Michigan State on Tuesday night in the Champions Classic at Madison Square Garden.

The Nos. 1 and 2 teams opened their seasons against each other for the first time since 1975 and the Wildcats made their case to be top-ranked next week.

Michigan State entered the season as the No. 1 team in the country for the first time, but aside from All-American Cassius Winston, the Spartans struggled to score. Winston had 21 points.

This Kentucky team is built around returning contributors instead of one-and-done freshmen, but Maxey asserted himself in his first game.

After Winston cut the lead to three on a three-point play with 1:27 left, Maxey hit a 3 from way behind the line to make it 65-60 with 59 seconds left.

The passionate fanbases sold out the Garden. Kentucky supporters and Michigan State traded "Go Big Blue!" and "Go Green! Go White!" chants when things got close. It was a marquee, event but a choppy game. Neither team shot over 40% from the field and they combined to shoot 50 free throws.

The Spartans couldn't find the range from 3, going 5 for 26 and certainly looked like they could have used the scoring of senior guard Joshua Langford, who is expected to be out until January with a right foot injury.

Michigan State had whittled a 10-point halftime deficit down to four when Kentucky went on a 9-0 run behind 3s from Kahlil Whiney and Nate Sestina, pushing the lead to 54-41 with 9:57 left in the second half.

Kentucky's veteran backcourt of Ashton Hagans (11 points) and Immanuel Quickley (10 points), both sophomores, but were outshined by Maxey. The 6-foot-3 guard from Texas attacked the basket and made clutch 3s.

GAINESVILLE, Fla. — Kerry Blackshear Jr.'s Florida debut came in front of his mom and several other family members. It's one of the reasons he chose to play in Gainesville, about a two-hour drive from his hometown.

It also made his first game with the Gators even more special.

Blackshear had 20 points and 10 rebounds, looking every bit as good as advertised as No. 6 Florida opened its most anticipated season in more than a decade with a 74-59 victory over North Florida on Tuesday night.

"My goodness, he's a heck of a player," Florida coach Mike White said. "It's hard for anyone to average 20 and 10. I don't foresee that happening. But he's a terrific player and he gives you the opportunity offensively to play in a variety of ways.

"He scores in the interior. He draws fouls. He can shoot it. And probably his most underrated asset is how well he passes the basketball. He's extremely unselfish as well."

Blackshear made 8 of 11 shots, including a 3-pointer, and was perfect from the free throw line. The 6-foot-10 graduate transfer who came to Gainesville after four years at Virginia Tech added three assists and two steals.

He gave the Gators their first significant inside presence since Patric Young five years ago. Of course, it came against an overmatched team from the Atlantic Sun Conference.

Blackshear and Florida should get a better test against rival Florida State on Sunday.

AUBURN, Ala. — Samir Doughty scored 20 points to lead No. 24 Auburn to an 83-74 victory over Georgia Southern Tuesday night in the opener for both teams.

The Tigers, coming off their first Final Four trip last season, could never quite pull away from the Sun Belt Conference's Eagles. But Doughty made five of six free throws over the final 1:09 to avoid a late scare.

Auburn took a 61-48 lead eight minutes into the second half with Danjel Purifoy's 3-pointer punctuating a quick eight-point flurry.

Edwards overcame a slow start to score 24 points in his much-anticipated debut, and Georgia pulled away late to beat Western Carolina 91-72 on Tuesday night in each team's season-opening game.

It was the most points for a Georgia freshman in his debut since Wilkins' 26 points against Troy on Nov. 30, 1979.

Edwards is considered Georgia's most celebrated signee since Wilkins, the longtime Atlanta Hawks standout who was inducted into the Naismith Memorial Basketball Hall of Fame in 2006.

Edwards (6-foot-5), a guard from Atlanta, already is projected as one of the top picks in the next NBA draft.

For now, he's trying to adjust to the college game. He started slow, making only one of his first six shots, but found his 3-point shot in the second half to help the Bulldogs pull away.

"I got my confidence back and just started playing ball," Edwards.

"It warmed my heart and it's something I'll always remember," he said.

Pons collected a career-high 15 points with seven rebounds and three blocks Tuesday as the Volunteers opened their season by beating UNC Asheville 78-63 for their 27th consecutive home victory.

"He's a great worker," Tennessee coach Rick Barnes said. "I could put him up there with anybody we've had since we've been in coaching. He works at it. He's going to do everything he can to do try to do it right, to a fault, to be honest with you."

Lamonte' Turner led Tennessee in scoring with 17 points, but Pons' breakthrough garnered much of the postgame attention.

The 6-foot-6 junior guard/forward from France made 13 starts last year but watched his role diminish as the season wore on. Pons scored a total of 13 points over Tennessee's final 20 games.

Pons said he took about 300 shots from 3-point range each day during the offseason while also attempting plenty of shots from closer range.

"Every day, I put the shots in — on the weekends, on my days off," Pons said. "I just never stopped."

Tennessee needs more production from Pons as the Vols attempt to replace All-America forward and first-round draft pick Grant Williams as well as second-round draft choices Admiral Schofield and Jordan Bone from a team that reached the Sweet 16 last season.

UNC Asheville's LJ Thorpe made a driving basket to cut Tennessee's lead to 36-30 with 19:39 left. Tennessee responded with a 15-1 spurt and never looked back.

TUSCALOOSA, Ala. — Penn freshman Jordan Dingle saw just what he needed before he hit a game-winning shot in his first career game.

"I saw an opportunity. In the huddle, Coach Donahue said if you see an opportunity don't hesitate," Dingle said. "I saw the defender bite a little bit, so I made it to the basket and didn't hesitate."

The Quakers spoiled the debut of Crimson Tide coach Nate Oats. AJ Brodeur finished with 19 points and 10 rebounds for Penn.

"Taking a loss early isn't always the worst as long as your guys are resilient enough to come back," Oats said.

Lewis made a 3 with 20 seconds left for Alabama but Dingle gave Penn back the lead. Lewis couldn't convert from the line with a chance to tie or take the lead.

"It's tough to lose like that, but you just gotta keep moving forward," Lewis said. "After this, I'm going to have to go shoot some free throws because I just can't live with not making free throws at the end of the game."

Ryan Betley scored 12 points for Penn and Eddie Scott had 10.

Freshman guard Jaden Shackleford scored 16 points for the Tide. James Bolden, a graduate transfer from West Virginia, had 10 in his Alabama debut.

STARKVILLE, Miss. — Tyson Carter had a game-high 23 points to lead Mississippi State to a season-opening 77-69 win over Florida International on Tuesday.

Devon Andrews led Florida International with 16 points while Trejon Brewer had 13. Eric Lovett and Osasumwen Osaghae also finished in double digits for the Panthers with 11 and 10 points, respectively.

Florida International steadily chipped away at Mississippi State and trailed just 62-60 with nine minutes left in regulation. But Molinar's three-point play with 7:35 remaining ignited a 9-0 run by the Bulldogs to put the game away.

"That was a tough opponent and what we expected," said Howland. "Our half-court defense was outstanding in the first half, but we got tired towards the end of the game. We also got off to a slow start, offensively, and every bounce that could've gone wrong went wrong for us in the first 10 minutes. But I was proud of our great finish to the first half and we knew Florida International was not going away. They have a senior-laden team and won 20 games last year."

Carter was 8-of-16 shooting from the field and connected on 5 of his 9 attempts from 3-point territory. But he wasn't happy about Mississippi State's turnovers and he was responsible for eight of those 18 turnovers.