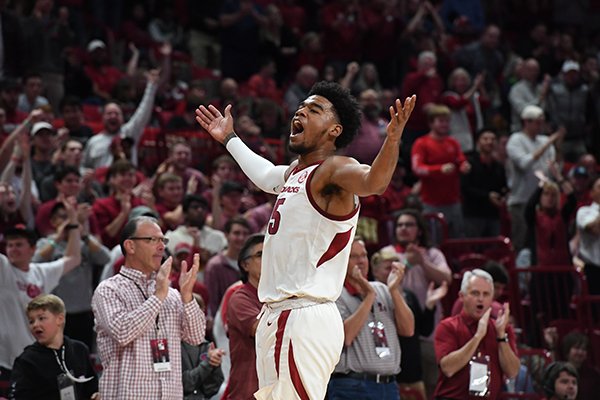 Arkansas guard Mason Jones (15) celebrates during a game against Rice on Tuesday, Nov. 5, 2019, in Fayetteville.

FAYETTEVILLE -- Tuesday didn't get off to a great start for the University of Arkansas men's basketball team, but it got better.

The Razorbacks beat Rice 91-43 on Tuesday night at Walton Arena in Eric Musselman's debut as Arkansas' coach before an announced crowd of 17,274.

Musselman said before the game that 6-8 sophomore Reggie Chaney had been suspended indefinitely for a violation of team rules and 7-3 sophomore Connor Vanover's waiver to be eligible this season had been denied by the NCAA after he transferred from California.

The Razorbacks were down to eight eligible scholarship players without Chaney, but that was plenty enough for them to win their 45th consecutive home opener.

UP NEXT Arkansas plays North Texas at 7 p.m. Tuesday at Walton Arena in Fayetteville.

"We came in ready to play," said junior guard Mason Jones, who led Arkansas with a career-high 32 points, 7 rebounds and 3 assists. "We really took this week hard. The coaches stayed on us.

"They didn't let us relax, and they told us to take Rice like we were playing an SEC team. So we were prepared, and we knew we wanted to show the hard work we put in this summer and in training camp."

"It just felt good to get the first game out of the way," Joe said. "We got the crowd into the game.

"We played our game -- pace and space. We were able to knock down the shots and play great defense. The overall feeling was amazing."

"Really proud of the effort that our team showed on both ends of the floor," Musselman said. "To score 91 points when we really are still trying to figure out kind of who we are and what our identity is.

"Now, we had 21 turnovers, so if we could get 10 of those back and have a shot on goal, maybe we score a little bit more.

"Defensively I thought we were locked in. Probably only had three or four defensive missed assignments, which is very few for an opening night."

Musselman, who was at Nevada the previous four seasons in his first college head coaching job, said the team's goal is to have 200 passes, and the Razorbacks made 254.

"It's the most passes that I've ever had a a college team have," Musselman said. "So really good ball movement."

Jones said the Razorbacks had no issues going primarily with eight players.

"That's no excuse in college basketball," Jones said. "We've got training, we've got people that's going to take care of our bodies."

Sophomore forward Ethan Henderson played 12 minutes, getting time that likely would have gone to Chaney and scored 2 points with 3 rebounds.

"Next man up," Jones sad. "Y'all saw tonight that Ethan Henderson was ready to play. He had a good dunk, he had a couple of rebounds. He ran the floor like Coach wanted him.

"Knowing when we get Reggie back and Ethan is already ready to play, that's more production for us. Knowing we can add Ethan in there and give him more minutes, it's going to be real good for our team."

Despite the 6-8 Henderson being the tallest Razorback with Chaney suspended -- Bailey is the second-tallest at 6-6 -- Arkansas outrebounded the Owls 45-27.

"We're trying to outreact people because we're a little bit smaller, so that's what we're going to have to do," Musselman said. "I thought the effort tonight was great. We'll see how it is [in the next game] against North Texas."

Rice finished with 27 turnovers along with its shooting struggles.

"Just going off this weekend's practice, Coach put us in a real situation for their plays," Jones said. "The plays they were running, we already knew."