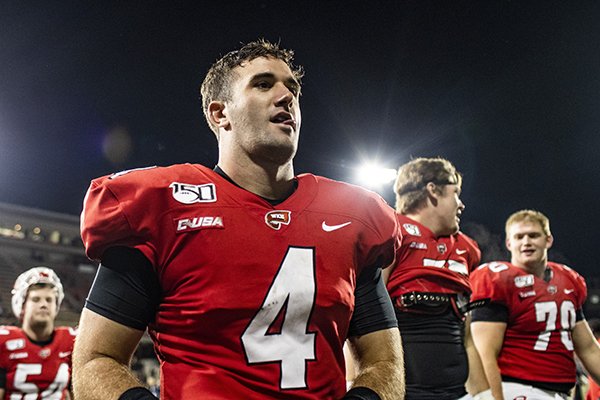 As a 4-star recruit and Charleston High School graduate, Storey was the statewide Arkansas topic for his pre-Texas Bowl practice with Bret Bielema’s Razorbacks in December 2014.

After redshirting in 2015, Storey was already 2016 old news. He was the nominally used backup behind Austin Allen while Arkansas fans became enamored with big-armed 2016 redshirting freshman redshirt Cole Kelley.

Kelley supplanted Storey as the 2017 backup. With Allen graduated and Chad Morris commencing coaching Arkansas in 2018, Kelley started No. 1 with Storey No. 2.

Storey would surpass Kelley and start nine games. But with Arkansas 2-10, Storey knew he was starting to be finished.

As graduate transfers, Morris last December signed Ben Hicks, in two seasons quarterbacking the 5-7 and 7-5 turnaround for the woeful SMU program that Morris inherited off a 1-11 season and went 2-10 with his first year, and committed former Texas A&M starter Nick Starkel to arrive by summer.

Storey, even at the expense of his lifelong Razorbacks dream, moved on, too. He left without rancor as a graduate transfer to Western Kentucky.

“We didn’t have a great year last year,” Storey said. “Obviously it was not a good one at all. So knowing they were basically trying to replace all of us — that’s just kind of how college football goes. If you are not producing, someone is going to get replaced. Understanding that and talking to Coach Morris several times and understanding they were wanting to bring in more guys we decided we should just go ahead and look somewhere else.”

Not quarterbacks. Quarterbacks inevitably get too much credit and certainly too much blame.

So Hicks and Starkel, not finishing heralded at SMU and Texas A&M like they had when performing to high praise, now plummet from dividing Arkansas’ previous nine starts to sitting behind redshirt freshman Jones and true freshman Jefferson.

They take the fall for a 2-7 team that’s certainly multi-faulted beyond the quarterbacks’ foibles.

“A lot of factors that have come into play,” Morris said, “that wasn’t solely just those two guys or just one guy. I mean it just didn’t work out.”

Some Arkansas fans have long clamored for Jones to start, which he will Saturday with Jefferson playing off the bench.

Yet even with two touchdown passes these last games, Jones as the fans’ choice already is challenged by Jefferson’s late-game debut last week.

Storey can relate to it all. He’s experienced all what four Arkansas quarterbacks experience this week.