Forward out due to suspension 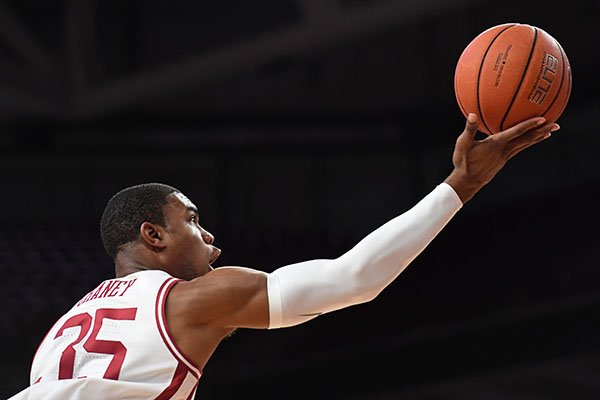 Arkansas forward Reggie Chaney is shown during an exhibition game against Arkansas-Little Rock on Sunday, Oct. 20, 2019, in Fayetteville.

FAYETTEVILLE -- The already slender bench for the University of Arkansas took a hit a couple of hours before Tuesday's season opener when the school announced sophomore forward Reggie Chaney was starting the year on an indefinite suspension.

Chaney was allowed to sit on the bench with redshirting players JD Notae, Connor Vanover and Abayomi Iyiola during the Razorbacks' 91-43 win over Rice.

"I thought the guys did a great job with a limited roster so to speak," Arkansas Coach Eric Mussleman said. "I guess in the last four years I've been kind of used to having a roster that's seven or eight."

Isaiah Joe and Mason Jones led the way with 32-plus minutes each, while Desi Sills and Jimmy Whitt played 28-plus minutes, Jeantal Cylla and Jalen Harris played nearly 22 minutes and Adrio Bailey nearly 21.

"I looked up at one point and Isaiah Joe was playing the power forward spot," Musselman said. "I looked up later and he was playing point guard. From a versatility standpoint, our guys have done a good job of learning different positions."

Junior guard Mason Jones scored the game's first six points on three-point shots at the 18:56 and 18:28 marks in the first half and went on to finish with a career-high 32 points on 12 of 18 shooting.

Jones had the most points for the Razorbacks in a season opener since Rotnei Clarke scored 51 points against Alcorn State in the 2009-10 season.

Jones went 4 of 8 on three-pointers and 4 of 4 from the free throw line.

The 6-5, 200-pounder's toughest basket came when he appeared to get hacked by 6-10 Max Fiedler on a drive down the right baseline. Jones wound up crashed on his back while his bank shot settled through the nets. He got up with both hands outstretched toward the nearest referee, wondering why there was no foul called.

Arkansas improved its lead in the all-times series with Rice, its former Southwest Conference rival, to 103-41, including 55-11 at home.

Arkansas guard Isaiah Joe dealt a career-high 7 assists to go along with 24 points on 10 of 18 shooting and 5 rebounds.

Joe's previous high had been five assists in two games last year, the last on Feb. 5 against Vanderbilt.

Junior guard Jalen Harris has a significantly higher three-point shooting percentage than he did last season, when he struggled to 8 of 69 (11.6%) behind the line.

Harris went 2 of 2 from beyond the arc and finished with 10 points, 4 rebounds and 1 assist.

The Razorbacks finished with 21 turnovers, continuing a troubling trend from their two exhibition victories.

Isaiah Joe provided one of the most crowd-pleasing moments midway through the first half.

Starting from the right wing, Joe got a step on his defender and blew past Trey Murphy III about 15 feet from the goal. Forward Robert Martin tried a run-by swat, but Joe was already up in the air for a left-handed dunk to give the Hogs a 29-16 lead.

Adrio Bailey had a forceful block midway through the first half. With the Razorbacks leading 25-12, Bailey rose up to swat a jumper from Rice's Tommy McCarthy in the paint.

Later, a hustling Bailey crashed into a fan sitting in a courtside seat as a ball went out of bounds. Bailey checked on the fan, then gave him and his two nearest neighbors a high five before heading up court.

Junior Jeantal Cylla brought the crowd to its feet during an early scoring frenzy in the second half. After a steal by Mason Jones, the guard got the ball out to Isaiah Joe on the break. Joe hit Cylla on the right wing and the 6-7 Cylla slammed a one-hand jam.

Isaiah Joe, the Razorbacks' team leader with 27 charges taken last season, got on the board with his first drawn charge of the season in the first half. With 2:18 remaining in the half, Joe set up to draw contact from Rice guard Chris Mullins and got the call.