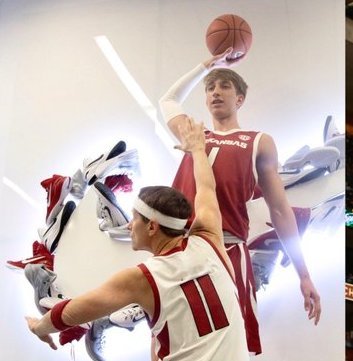 Arkansas hosted one of the state’s top sophomores, guard Joseph Pinion, for an unofficial visit on Saturday.

Like most Arkansas visits, the highlight was recreating a famous photo of NBA stars with Coach Eric Musselman. Pinion played the role of LeBron James dunking over former guard Jason Terry in a photo shoot that took about five minutes,

“It was really fun because he’s a fun guy, but he’s also like serious,” Pinion said of Musselman. “He took it real serious whenever we were taking those pictures. He takes it so serious it makes you laugh.”

He enjoyed all parts of the visit.

“It was a real fun experience to be able to meet all the coaches,” Pinion said.

He and his parents took in Arkansas’ practice before the Mississippi State football game.

“I really liked how they brought the players into the stands to go see some of the kids and the people that came out and watched,” Pinion said.

Pinon is a gym rat that doesn’t miss a day of shooting.

Pinion grew up watching the Hogs. His all-time favorite Razorback is former forward Michael Qualls. The chance to be a Hog would fulfill a life long goal.

“It would mean a lot,” said Pinion, who has a 3.8 grade point average. “It would be a great honor. It would be a dream come true.”