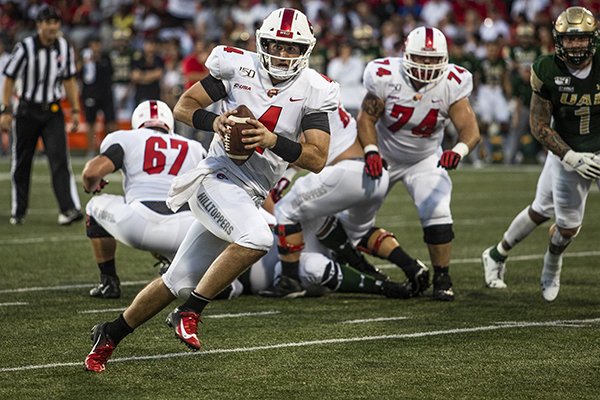 FAYETTEVILLE -- Ty Storey said Western Kentucky's road trip to Northwest Arkansas this weekend is "obviously a business trip," but the former University of Arkansas quarterback and All-State standout at Charleston knows it will be much more.

The Hilltoppers (5-4) will play the Razorbacks (2-7) for the first time at 11 a.m. Saturday with a shot at bowl eligibility on the line and a chance for Storey to show Arkansas fans and his former team how he's developed since leaving as a graduate transfer in February.

Storey, who speculated he'll have 20 to 25 family members and friends at Reynolds Razorback Stadium, said he holds no ill will toward Coach Chad Morris, offensive coordinator Joe Craddock or the Arkansas program.

"There was never any bad blood or anything," Storey said. "It was just ... that's kind of how life goes sometimes. You have to make decisions that ... isn't what you want to do or whatever, but it's what has to be done.

"So there was never any bad blood. We had a great relationship. I'm always thankful they threw me out there and let me show what I could do last year. There was no issues between any of us."

Storey said he and his parents, Shane and Dianna Storey, determined last winter that with the Razorbacks actively seeking quarterbacks -- and eventually landing Ben Hicks and Nick Starkel through the transfer portal -- they felt it was time to find another place to play.

"I basically knew, I mean we didn't have a great year last year, obviously," Storey said about the Razorbacks' 2-10 debut under Morris. "Not a good one at all.

"So knowing they were basically trying to replace all of us, that's just kind of how college football goes. I mean, if you're not producing, someone is going to get replaced. So understanding that and talking to Coach Morris several times about it and understanding they were wanting to bring in more guys, that was just kind of where me and my family thought we should go ahead and look somewhere else, just knowing it was going to be an uphill battle."

"Ty is a home-state kid, so I know him leaving and coming back, he's going to be amped up," Harris said.

Storey said he congratulated redshirt freshman John Stephen Jones, who is slated to start for the Razorbacks on Saturday, for his touchdown pass at Alabama two weeks ago.

"That was big time," Storey said. "I've kept up with several of them, and I have been rooting for them all year. Just this week's a little different."

In an interesting twist, Storey will oppose Jones rather than the transfers Hicks and Starkel, who started the Razorbacks' first nine games.

Storey, 4-2 in six starts with the Hilltoppers, said he's been in touch recently with several Razorbacks, like Harris, defensive back Micahh Smith and Jones.

"I was FaceTiming Micahh the other day and I talked to Scoota a little bit," he said. "All those guys I keep up with. It seems I've watched more Razorbacks game this year than I have in a while. It just worked out by chance being able to watch them."

Storey replaced junior Steven Duncan, who needed a pin placed in a broken bone in his right foot after a 38-21 loss to Louisville in Week 3.

Western Kentucky won consecutive games against Alabama-Birmingham, at Old Dominion, Army and Charlotte in Storey's first four starts, but the Hilltoppers have lost their last two at Marshall and against Florida Atlantic.

Morris said the coaching staff would have preferred keeping Storey on campus.

"Ty and I met with his family, and we did not want Ty to leave," Morris said. "But Ty wanted to go to a place ... and have an opportunity to be the starter and was going to look around and see what was best for him."

Said Craddock, "Ty's a gritty competitor. He loves to win and he hates to lose. I would expect nothing else but for him to come in here and give us his best shot."

The Hilltoppers run a Spread attack that gets the ball out of Storey's hand quickly and lets wideouts like Lucky Jackson, Jahcour Pearson, Jacquez Sloan and Quin Jernighan and tailback Gaej Walker operate in space.

"The thing I remember is he's a strong, strong competitor," Arkansas defensive coordinator John Chavis said. "There's no question about that. I have tremendous respect for him.

"We're gonna have a plan that is good enough and it really doesn't matter who's the quarterback. That's just the way you've got to do things."

Storey said his transfer decision came down to Western Kentucky and one other unnamed school, and he was aware the Hilltoppers had Arkansas on their schedule.

"I thought that was pretty cool, but obviously that wasn't the whole reason why I came here," he said. "It was just kind of a cool little benefit to it."

Storey said he's excited to see what the environment will be like Saturday.

"Knowing the atmosphere and just knowing that area it's going to be cool," he said. "I haven't been back to Fayetteville in a while so it's going to be a cool, interesting game. Obviously it's a business trip. We've got to take care of what we can and try to come out with a win."