Joe shows growth in game off the bounce 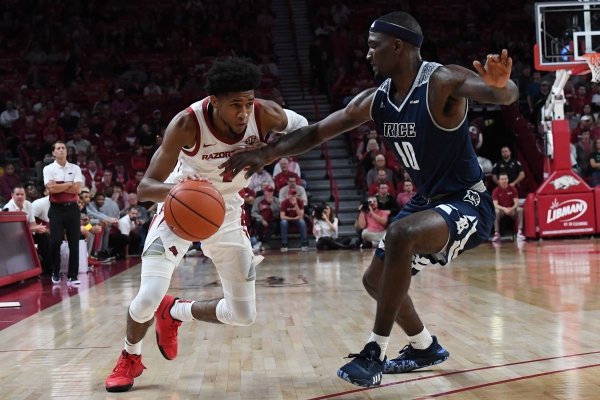 Isaiah Joe drives by a Rice defender during Arkansas' 91-43 win over the Owls on Tuesday, Nov. 5, 2019 during the Razorbacks' regular season opener at Bud Walton Arena in Fayetteville.

FAYETTEVILLE — Arkansas-Little Rock basketball coach Darrell Walker said on Oct. 20 that, in his opinion, Isaiah Joe has a legitimate shot to play in the NBA - if he grows more comfortable with one key thing.

"I told him he had to learn how to pump fake and put that ball on the floor two or three hard dribbles and raise up and shoot it," noted Walker, an All-American guard for the Razorbacks in the 1980s. "Once he does that, he’s going to have a chance. He’s on the NBA’s radar already."

Although it is only one game and a very small sample size, it appears Joe took Walker's advice and ran with it.

As a freshman, Joe was known more as a catch-and-shoot threat on the perimeter, and while he certainly made teams pay for leaving him open beyond the arc - 113 3-pointers in 2018-19 - he was also aware he needed to add another dimension to his game on the offensive end and showcase that he can create offense for himself off the dribble.

Joe, who finished with 24 points on 10-of-18 from the floor and 4-of-11 from 3-point range, scored seven times off the bounce against Rice on Tuesday.

Six of his seven off-the-dribble buckets were 2-point attempts. Joe made a concerted effort to keep the Owls guessing as to what he would do with the ball in his hands. Catching in each instance on the perimeter, Joe put up a shot after driving left four times and made three - a left short-corner floater, a long 2 on the right wing and a midrange jumper just inside the free throw line.

He was also a perfect 3-for-3 from the floor on 2-point attempts when attacking with his right hand. He threw down an impressive dunk with the left hand, got a layup to drop then split two Rice defenders following an Ethan Henderson ballscreen and finished through contact near the restricted area.

"The baseline dunk, I've never really seen him do that," said Jalen Harris, who knocked down both of his 3-point attempts against Rice. "It just shows how much work he's put in in the offseason, being able to put the ball on the floor and score at all three levels. The work he's put in, it's actually showing right now."

Joe also knocked down his lone 3 moving right off an Adrio Bailey ballscreen.

The sophomore took seven 2-point shots against Rice on Tuesday. His seventh attempt inside the arc did not come until the third game of the season (Indiana) as a freshman, and his sixth 2-point score came one game later against Montana State, when he recorded his first career dunk.

It was a plus seeing Joe actively more aggressive going to the rim considering the 3-ball wasn't falling for him early. He was 0-of-3 from distance in the first half, but hit all four shots inside the arc.

For the game, he finished only 3-of-9 on catch-and-shoot 3s (2/3 from left wing, 0/2 in the right corner, 1/4 on right wing), but instead of settling he found creative ways to make an impact scoring the ball. He did more than just aide Mason Jones' career night, though. Joe handed out a career-high seven assists to offset five turnovers.

Razorbacks coach Eric Musselman elected to play Joe at point guard late in the game against the Owls. Joe becomes a triple-threat kind of player with the ball in his hands, and his production after putting the ball on the floor was great to see, he added.

"The number of assists he had the other night was phenomenal, (and) we all know about his 3-point shooting," Musselman said. "His dunk to the rim was a big-time play off the bounce. And like I said, he’s got good size to see over defenders and stuff, and he's a willing passer.

"I think that’s just another part of his game that he’s continuing to develop."