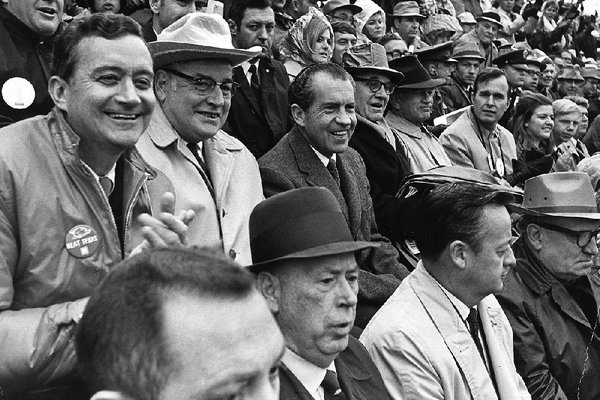 President Richard Nixon (center) watches with other dignitaries during the game between No. 1 Texas and No. 2 Arkansas at Razorback Stadium in Fayetteville on Dec. 6, 1969. Texas won 15-14. On Saturday, nearly 50 years later, President Donald Trump will attend the game in Tuscaloosa, Ala., between LSU and Alabama, the top two teams in The Associated Press poll.

Alabama Coach Nick Saban, who turned 68 on Halloween, said on Wednesday's SEC coaches teleconference he's seen highlights of the "Big Shootout," but he couldn't specifically recall watching the game on ABC at a time when only one college game was televised each Saturday.

"I had to be the guy to go out and turn that antenna for my dad so he could watch whatever he wanted on TV," Saban said. "So I'm sure I was busy doing that."

LSU senior quarterback Joe Burrow said it will be exciting to have Trump at the game.

Saban said it's an honor to have the president interested enough to attend the Alabama-LSU game.

"I'm sure we'll do everything we can to welcome him," Saban said.

LSU Coach Ed Orgeron said he's been to the White House four times as an assistant coach at Miami and Southern Cal when the Hurricanes and Trojans were honored for winning national championships, but he's never had a president attend one of his games.

"If the president wants to come to a big game like this, I think it's good," Orgeron said. "I just hope he sits right there in the middle and cheers for both sides."

"I think a president needs to be neutral," Orgeron said. "If he wants to cheer for LSU, I'll welcome it, but obviously I don't think the president should be cheering for either team. I think he should be right down the middle."

Saban has had six national championship teams -- one at LSU and five at Alabama -- honored at the White House, and he coached the Crimson Tide to a 26-22 victory over Georgia in overtime in the 2017 national title game in Atlanta with Trump in attendance.

When Saban was Michigan State's coach in 1995, President Bill Clinton came to the campus to make a commencement address.

"They headquartered in our [football] building," Saban said. "So I had an opportunity to meet him."

A reporter recalled that Clinton took a nap on a couch in Saban's office.

"He didn't take a nap in my office," Saban said. "The Secret Service came and asked if they could take my couch to his office so he could take a nap, and I said, 'Certainly.' "

Missouri Coach Barry Odom said he expects senior quarterback Kelly Bryant to start at Georgia on Saturday, but that Taylor Powell -- a redshirt sophomore from Fayetteville -- worked with the first-team offense this week with Bryant continuing to recover from a hamstring injury.

Bryant practiced Wednesday and took the majority of the first-team snaps, Odom said.

"Taylor's working in live as he has every week," Odom said. "We always make sure as we get into game week that our No. 2 quarterback takes some meaningful time with the ones, because that position is so important and you're always a play away from being the guy.

"Kelly's on track to play, and I think he'll play well, and Taylor understands that he's going to prepare just like he has every week and put us in position where if his number is called, we can go execute the offense and do the things that we need to do to play efficiently."

Odom said Taylor has been "awesome" in his preparation.

"He's a great teammate and has a tremendous football IQ," Odom said. "He understands the position and what we're trying to get out of it. He's got the respect of the locker room with the way that he's worked."

Powell has completed 17 of 40 passes for 242 yards in his Missouri career. In two games this season against Troy and Kentucky when he came in for an injured Bryant, Powell hit 10 of 18 passes for 91 yards.

Bryant told the St. Louis Post-Dispatch he has "a ton of confidence" in Powell.

"He just puts himself in that position like he's going to play every rep," Bryant said. "He's a veteran now. He knows this offense. It's his second year in this offense with Coach [Derek] Dooley. Everyone knows he can play and can execute at a high level."

Tagovailoa underwent ankle surgery after being injured against Tennessee on Oct. 19 and didn't play in Alabama's 48-7 victory over Arkansas the next week, but he's had extra recovery time with the Tide having an open date last week.

"Tua is practicing and doing OK in practice," Saban said Wednesday. "It's still going to be a game-time decision as to whether he plays or not."

After Florida State fired Willie Taggart on Sunday, Stoops was among the names brought up as a possible successor because he was the Seminoles' defensive coordinator from 2010-12 and has led Kentucky to three consecutive bowl games, including a 27-24 victory over Penn State in the Citrus Bowl last season when the Wildcats went 10-3.

"It is something that you don't really want to address in-season," Stoops said Monday at his weekly news conference when asked about the FSU job. "For us and myself, it is 100% concentration on Tennessee."

Stoops said there's no need to discuss job speculation with his team.

"Our players know where my heart is at and my focus is," he said. "I can promise you, they'll know that we'll be ready to play this week and be ready to go."

"I don't even know where we're ranked," Saban said. "It's not going to matter if we don't win the games that we play. So we're more focused on what we've got to try to do to be successful against the challenging teams that we have to play."

Presumably, Saban is well aware that Alabama is ranked No. 3 in the playoff poll. But saying he has no idea sounds good.

The Bulldogs' record for most total offense against an SEC opponent had been 631 yards when they held on to beat the Razorbacks 51-50 in 2016 after Beniquez Brown blocked a 29-yard field goal attempt by Cole Hedlund with less than a minute remaining.

Mississippi State then broke its SEC record with 640 yards -- including 460 on the ground -- in the Bulldogs' 54-24 victory at Arkansas last week.

LSU Coach Ed Orgeron was asked this week how much the Tigers are motivated by their eight-game losing streak against Alabama.

"Obviously, in the back of everybody's mind, that can be a motivation," Orgeron said. "But they haven't beaten this team yet. This is a new team. This team has not been there. These are new guys, these are new coaches. Let's see what happens.

• Ole Miss freshman John Rhys Plumlee has set the school season record for rushing yards by a quarterback. He's up to 600 rushing yards after gaining 92 in the Rebels' 20-14 loss at Auburn, breaking the record of 544 previously set by Jeremiah Masoli in 2010.

Burrow, who has completed 205 of 260 passes (78.8%) for 2,805 yards and a school-record 30 touchdowns with 4 interceptions, could go a long away toward clinching the Heisman Trophy if he can lead LSU to a victory at Alabama.

The last time LSU and Alabama met when both were ranked No. 1-2 in The Associated Press poll in 2011, neither team scored a touchdown as the Tigers and Crimson Tide combined for five field goals. LSU won that defensive struggle 9-6 in overtime. The scoring figures to be considerably higher this time around with Alabama averaging 48.6 points and LSU 46.8 points per game. Entering Saturday’s game, LSU is No. 2 in the College Football Playoff poll, the season’s first of which was released Tuesday night. Alabama is No. 3 and a 6-point favorite. LSU is looking to break an eight-game losing streak to Alabama, which won the teams’ rematch in the 2011 season 21-0 in the Sugar Bowl to take the national championship.

Vanderbilt at No. 10 Florida

Missouri at No. 6 Georgia

90 Conversion percentage on field-goal attempts by Tennessee’s Brent Cimaglia, who has hit 18 of 20 with a long of 53 yards.

2015 Last time Alabama lost at Bryant-Denny Stadium in Tuscaloosa, Ala. The Tide have won 32 consecutive home games since losing to Ole Miss 43-37.

“Well, you can tell by the rankings it looks like we’ve made up some ground.”