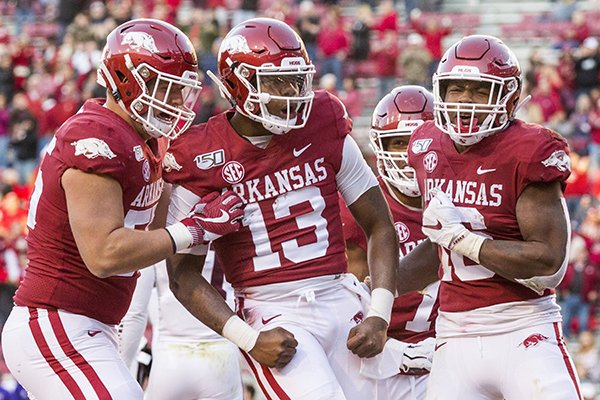 Arkansas quarterback KJ Jefferson (13) celebrates with teammates after scoring a touchdown during the fourth quarter of a game against Mississippi State on Saturday, Nov. 2, 2019, in Fayetteville.

FAYETTEVILLE -- University of Arkansas Coach Chad Morris pointed out the youth movement at quarterback is one of several areas the Razorbacks have played freshmen throughout the season.

Morris said on his radio show Wednesday night that Arkansas is the youngest team in the country.

Redshirt freshman John Stephen Jones and true freshman KJ Jefferson are expected to rotate at quarterback on Saturday and possibly the rest of the season.

Jefferson can play in each of the final three games without fear of losing his redshirt.

[Video not showing up above? Click here to watch » https://www.youtube.com/watch?v=6G0Q5yNlyhY]

"They will add to the list of freshmen and sophomores that we've started this year," Morris said. "I believe about half of our starters this season have been freshmen or sophomores. So they'll add to that list."

[Video not showing up above? Click here to watch » https://www.youtube.com/watch?v=e511WmRBpHw]

Freshman safety Jalen Catalon, who has played sparingly in three games, can participate in one more and still retain his redshirt. That game could come Saturday.

Catalon had at least one interception in Tuesday's practice.

"It's time for him to maybe get his feet wet," defensive coordinator John Chavis said. "For this team to grow where it needs to, we've got to continue to bring those young guys along, because that's the future.

"That's the future and that's where the hope is going to be. Now, we're not discounting anything else. I don't want anybody to think that I'm saying that. We've got to get them in the game for them to get better, and that's part of the process."

Senior guard Austin Capps is expected to rejoin the starting lineup Saturday after missing the past two games in concussion protocol. Capps would make his sixth start, having also sat out the Ole Miss and Colorado State games in succession with an ankle injury.

Freshman quarterback KJ Jefferson is switching back to jersey No. 1 this week after dressing out in No. 13 much of the season.

The offensive No. 1 jersey is available this week because junior receiver De'Vion Warren, who normally wears it, is out with an ankle injury. Warren will be reassessed during the open date next week.

Western Kentucky Coach Tyson Helton, when asked at his Monday news conference how the Hilltoppers will match up with Arkansas this weekend, launched into an interesting spiel about talent.

"[Arkansas is] what an SEC-talented team should be," Helton said. "They're no different than a lot of the teams that I've played. They're a talented football team, but talent does not decide who wins and loses a game.

"It's all the things: Field position, turnovers, being at the right place at the right time, doing your job, having momentum. Those are the things that win the game. The beauty of college football is, I don't care who the most talented team is, if you do your job in all three phases and make the plays, you're going to have an opportunity to win the game.

"Our team believes that, so we just have to keep that going. And if we carry that blueprint into Arkansas and we make that happen, we'll be very happy."

Starkel and Hicks kept their respective jersey numbers, 17 and 6, while Lindsey bore the jersey number 4 of Western Kentucky quarterback Ty Storey, the ex-Razorback.

Hicks even took some reps in the tight end role on scout team, like Cole Kelley did late in the season last year.

All three have given the defense looks as "Storey" this week.

"I think Ben went over there at times, Nick has gone over there a couple of times, and Jack Lindsey has been over there," Coach Chad Morris said. "They're rotating guys through over there to give our scout team a good look."

Western Kentucky wideout Lucky Jackson was feeling it during a 26-23 loss to Marshall a couple of weeks ago.

He caught 16 passes for 168 yards against the Thundering Herd, breaking the Hilltoppers' single-game record of 15 receptions held by Jay Davis from a 1969 game at Akron.

Jackson had nine catches for 194 yards in last week's loss to Florida Atlantic, giving the senior 25 receptions for 362 yards in a two-game span.

"We've had a really good connection ever since spring ball," Western Kentucky quarterback Ty Storey said. "He's a fifth-year senior like myself. It seems like I always know where he's gonna be, and he's really good at finding holes in the defense and exploiting them."

Arkansas is taking on Western Kentucky for the first time Saturday, but Razorbacks offensive coordinator Joe Craddock twice played the Hilltoppers in 2007 and 2008 when he was a quarterback at Middle Tennessee State.

"It was always a big rivalry for us back in the day," Craddock said. "The only thing I remember is that I broke two bones in my back my senior year against them."

Despite the broken bones, Craddock completed 19 of 29 passes for 212 yards and 2 touchdowns without an interception in Middle Tennessee's 21-10 victory at Western Kentucky in 2008.

Arkansas opponents have now gone four-plus games without throwing an interception. The streak of consecutive passes thrown without an interception is at 87 passes.

Mond finished the game with seven consecutive passes that were not intercepted, followed with 12 by Kentucky, 19 by Auburn, 30 by Alabama and 19 by Mississippi State.