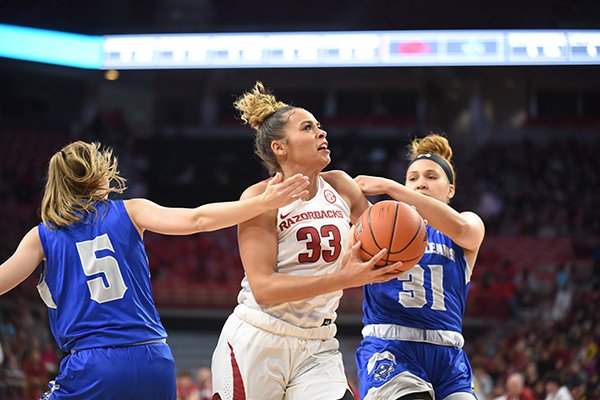 FAYETTEVILLE — A short bench was no problem for Arkansas in its season opener Friday morning.

The game was dubbed “Elementary Day” and the announced attendance of 6,801 included around 5,600 students from local schools.

Amber Ramirez hit two 3-pointers during the run, part of a 12-for-37 performance from beyond the arc for the Razorbacks. Dungee made five 3-pointers, and Ramirez and Alexis Tolefree made four apiece.

Arkansas forward Taylah Thomas finished with 10 points and 21 rebounds. Thomas' rebound total was one off the single-game record for the Razorbacks that was set by Shelly Wallace in 1988.

The Razorbacks led 26-12 at the end of the first quarter and 40-26 at halftime, and by as many as 37 points. The team was without three players who were injured, including returning starters Kiara Williams and Jailyn Mason.

Arkansas is scheduled to play again Monday at 7 p.m. against McNeese State.