Hogs look to be healed by spring 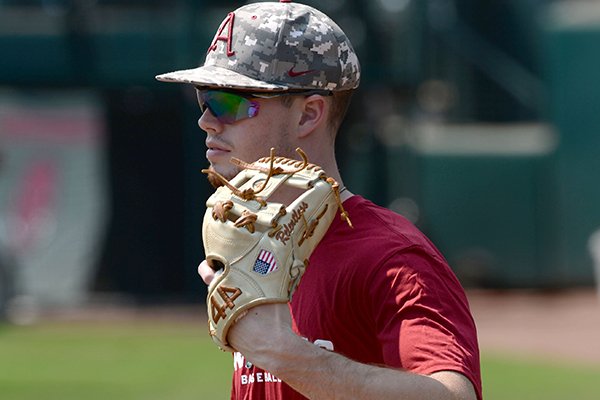 Arkansas junior Matt Goodheart is shown during practice Friday, Sept. 6, 2019, in Fayetteville. Goodheart was held out of scrimmages this fall after undergoing offseason shoulder surgery.

FAYETTEVILLE -- The University of Arkansas was missing nearly half of its projected starting lineup when the Razorbacks were shut out 1-0 in the first nine innings of their exhibition finale at Oklahoma State on Oct. 12.

The teams played 14 innings with the Cowboys taking a 7-2 victory.

"If you have injuries, obviously you want them in the fall and have a chance to heal up," Coach Dave Van Horn said last week after the Razorbacks completed fall practice. "I think we're well on our way to being ready to roll come February."

Martin, a junior from Lonoke and projected first-round pick in the Major League Baseball Draft in June, batted .286 last season with 15 home runs, 57 RBI and 67 runs. He underwent surgery in October for a broken hamate bone in his left hand.

"That hamate bone is a little bone at the bottom of the hand," Van Horn said. "We haven't figured out what it's good for in there."

Van Horn said Martin should be fully healed when practice resumes after the Christmas break and that he was able to do some drill work at the end of fall ball.

Goodheart, a junior from Magnolia, underwent shoulder surgery in July for an injury he suffered in late April during a series against Tennessee. Despite not being fully healthy for the final seven weeks, including the College World Series, Goodheart hit a team-leading .345 with 5 home runs and 47 RBI.

"He was a big-time hitter in our lineup and one reason we made it back to the World Series," Van Horn said. "We need to get his bat back. We feel like he'll be ready to go [when the season opens]."

Opitz, a junior, suffered a groin injury during fall practice while he was playing third base. He was held out of the Oklahoma State game as a precaution.

"He probably could have caught, but I had three freshmen I needed to get out there a little bit," Van Horn said. "It's all good."

Van Horn said Opitz, who batted .243 with 3 home runs and 33 RBI, should be more of an offensive threat this season.

"It's an amazing story with Casey," Van Horn said. "When we recruited him, we loved him defensively, but he was 160 pounds.

"He's going to his some home runs. He's definitely a threat to hit it over your head. He's made himself into a big-time pro prospect now that he's gotten bigger."

Webb, a junior transfer, batted .450 with 14 home runs and 66 RBI last season for Grayson (Texas) Community College. He was sidelined in fall practice in late September after injuring his shoulder making a diving catch.

"He made a really nice play in a scrimmage," Van Horn said. "He dove for a ball in left center and fell on his left shoulder wrong, and he had a hairline fracture in the back of his shoulder.

"It's just a touchy little injury because that bone's got to heal, it's got to fuse together and we have to get him right."

Van Horn said Webb can play the infield as well.

"I think that he likes playing in the outfield, but he can really turn the double play [as an infielder]," Van Horn said. "He's a little raw, so to speak, in the infield, but his arm slot is something that he can play infield.

"I think he'll have a chance to play professional ball out of here. In pro ball, there's so many outfielders that if you can play infield as well [it's a plus]. We'll work with him there, but I think for us, you're probably looking at him in the outfield."