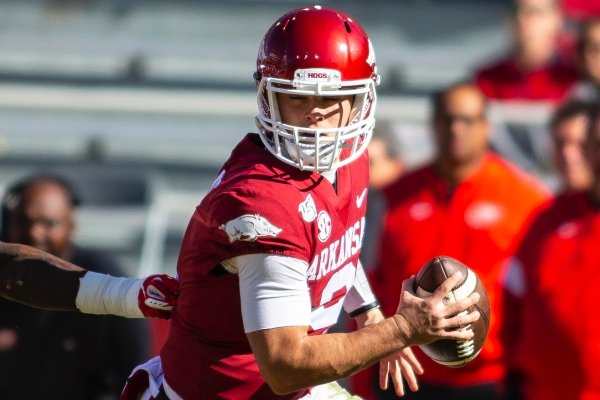 FAYETTEVILLE — On a jet prior to arriving at Arkansas in December 2017, Chad Morris gave an optimistic pitch in regards to what was ahead for the Razorbacks following former coach Bret Bielema's departure the month before.

Morris' speech included a line that indicated he planned to field one of the most explosive offenses in the country. Twenty-two games into his tenure, the Razorbacks have shown to be the opposite, particularly of late.

Arkansas managed 340 yards of offense - 253 rushing, 87 passing - in the latest in what has become a long line of embarrassing losses, a 45-19 beating at the hands of former Razorback quarterback Ty Storey and Western Kentucky.

"Very disappointing. Disappointed in the fact we let a team ... for us to come in here and not get off the field and have the opportunity to score some points," Morris said. "We've got to continue to — we’ve got some deficiencies, and we've got to go fill them."

The Razorbacks' defensive issues are glaring, no doubt. Arkansas is allowing 225.4 rushing yards per game and opposing quarterbacks have completed passes at a 65.4 percent clip through 10 games. Morris and offensive coordinator Joe Craddock's unit, though, has been dreadful as well, unable to come close to offsetting an abysmal defense.

And it starts at the quarterback position. On Saturday, Morris elected to give redshirt freshman John Stephen Jones his first career start. He completed just 3 of 10 passes for 27 yards and an interception, totaling a QB rating of 32.7.

True freshman KJ Jefferson was not much better - 6 of 15 passing, 60 yards and an interception, which was returned 25 yards for a touchdown by Hilltoppers safety Devon Key.

"We want to be one of the most explosive offenses in the country. We don’t want to get out there and play to a speed at which we’re going three-and-out and putting the defense back on the field," Morris said. "There’s been some adjustment to that. I think you look at where I’ve been before and how fast we play, sometimes you just have to adjust to it.

"But I knew this was going to be a rebuild. I knew it when I took the job. I knew from just looking at all the other SEC programs and looking at what we have to get and where we have to recruit to, to get this program where it needs to be and the areas and the footprint that you need to recruit in.

The last game Arkansas' quarterbacks hit on more than half of their passes was against then-No. 23 Texas A&M nearly two months ago. In the five games since, they are 60 of 142 (42.2 percent) through the air for 599 yards with three touchdowns and eight interceptions.

Arkansas did not have a touchdown pass in two of those games, including Saturday.

The Razorbacks' 87 passing yards against Western Kentucky are the second fewest in a game in Morris' five-year head coaching career. It is the second time a Morris-coached offense has thrown for less than 100 yards in a game, and the first time Arkansas did not reach 100 passing yards since a 49-28 victory at Texas Tech in 2014.

Morris said he thought Jones and Jefferson "did some really good things" in the loss.

"I thought when (Jefferson) got in there, I thought he played tough and obviously moved the football," Morris said. "That was good to see. I wish we could have that touchdown pass (to Treylon Burks) back on the holding call. But I thought he made some decisions with the ball.

"Again, a young man that is growing up right in front of us with every rep."

Junior running back Rakeem Boyd continued to be a bright spot for Arkansas offensively. He carried eight times for 185 yards and two touchdowns (runs of 76 and 86 yards), surpassing the 1,000-yard mark for the season. Boyd said he felt like he had more than eight touches in him, but Morris said the staff went in another direction considering Western Kentucky's time of possession advantage.

Boyd added that he thought Jones and Jefferson "played fine," but execution on a number of drives left a lot to be desired.

"It was just little mistakes," he said. "Treylon going down there, ball hit him in his chest, bounced off his helmet, I think that happened about two times. Those are big, long plays, you know what I mean, that John Stephen made a good throw and KJ made a good throw.

"Just stuff like that, you know, that we have to correct."