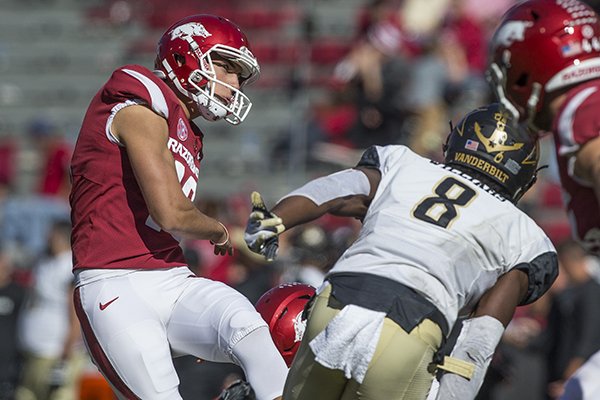 Arkansas kicker Connor Limpert attempts a field goal during a game against Vanderbilt on Saturday, Oct. 27, 2018, in Fayetteville.

Except late November at Arkansas they do. Three consecutive years the Razorbacks feature the epitome of winners bidding their Fayetteville farewell on losing teams.

For his 1953-1971 Baseball Hall of Fame career, Ernie Banks never played on a pennant winner. He played for the Chicago Cubs. Every year, mostly on sub .500 teams, Banks played his Wrigley Field last game of the campaign long out of postseason contention.

Yet he played his seasons' last games as ebulliently as he played the season openers. Mr. Cub, they called him for his indefatigable spirit that couldn't be defeated even as the Cubs lost.

Mr. Cub died in January of 2015. In 2016 the Cubs won their first National League pennant since 1945 and first World Series since 1908. Even Chicago's anti-Cubs because they're White Sox fans likely fondly imagined Mr. Cub smiling down from above.

For their 4-8 and 2-10 2017 and 2018 the Razorbacks fielded versions of Ernie Banks. Seniors as spirited for their final Fayetteville game at Reynolds Razorback Stadium as they were kicking off September, 0-0.

Frank Ragnow, the All-American center and guard injured and in street clothes, and quarterback Austin Allen, injured much of that season when Ragnow was too injured to protect him, come to mind as steadfast seniors as the 2017 Razorbacks closed a 4-8 season losing to Missouri in Fayetteville.

Originally a walk-on, Limpert successfully kicked 8 of 9 field goals as a 2016 sophomore, 19 of 24 last year and 12 of 15 this season and became a Lou Groza Award semifinalist two years running.

The more porous Arkansas' defense becomes late season the harder that Scoota and Sosa strive holding it together.

Harris led the SEC in tackles last year and with 75 leads it again.

Much as he cringed reviewing video of Mississippi State amassing 640 yards total offense in its 54-24 rout of the Razorbacks last week, Morris marveled at his linebacker's start to finish effort in his 12-tackle performance.

"It was impressive as I watched film to watch Scoota Harris and just his relentlessness and his ability to continue to sell out every play," Morris said. "It's very inspiring. When you have your best player selling out like that it allows me to use him as an example in team meetings exactly what the standard is."

Winners can and do play for losers. As they never cease trying to win when all seems lost, perhaps they should be defined the truest winners of all.