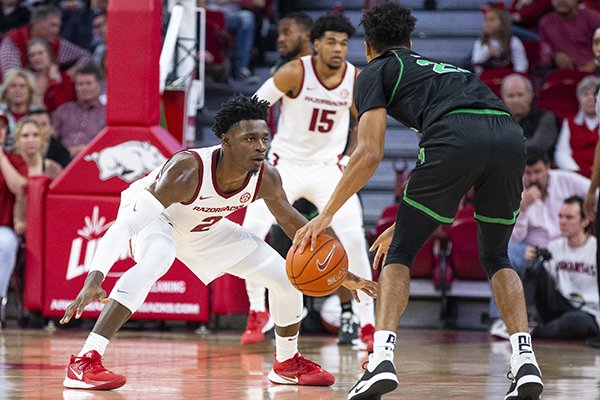 Arkansas' Adrio Bailey (2) and Mason Jones (15) play defense during a game against North Texas on Tuesday, Nov. 12, 2019, in Fayetteville.

FAYETTEVILLE — The play of the night in Arkansas' 66-43 win over North Texas came with an apology attached.

Whether or not it was necessary is another story.

With under eight minutes to play and the shot clock winding down, Razorbacks guard Jimmy Whitt caught on the right wing and drove right, eventually tossing up a floater off the glass. Whitt's shot missed, but forward Adrio Bailey was there to clean up the mess.

Bailey's put-back dunk over Mean Green forward Deng Geu sent the Bud Walton Arena crowd into a frenzy. He was also hit with a technical foul for hanging on the rim, but it wound up being inconsequential in Arkansas' second victory under first-year coach Eric Musselman.

Bailey's final bucket of the game capped a decisive 9-0 run by the Razorbacks and gave them their biggest lead of the night to that point at 47-33. Arkansas never trailed by fewer than 13 points the rest of the way.

The senior had his hand in a little bit of everything in the win. He finished with eight points on 3-of-4 from the floor and grabbed five rebounds.

Bailey also knocked down his first 3-pointer of the season - a right-corner triple in front of the North Texas bench - and the third of his career.

"I just felt when it came to me my feet were set and let it go," said Bailey, whose lone miss Tuesday came from beyond the arc. "Coach Musselman is just building that confidence, building the confidence in me to shoot it. I haven’t been shooting it by choice. He never tells me not to shoot the ball.

"I just never shoot it because I try to play within my strengths, but he gives me that confidence to shoot the ball."

Whitt, who scored a season-high 13 points on an array of midrange jumpers and carried the Razorbacks offensively for a stretch in the first half, was impressed with Bailey's extra-effort plays against the Mean Green, including the highlight-reel dunk.

“Adrio has always been a guy that is going to bring that energy,” he said. “The dunk was just icing on the cake for us. I think the meat of it was what he does out there for us on the defensive end. He is undersized, but he plays hard and makes big plays."

To complement his efficient night on the offensive end, Bailey continued to be a menace on defense, leading the charge in the Razorbacks securing the third-best defensive efficiency rating of Musselman's college coaching career (69.9).

He recorded a career-high four steals in the win. He also came away with three steals in Arkansas' season-opening victory over Rice last Tuesday, and currently ranks 13th nationally, according to KenPom analytics, in steal percentage at 7.7.

Musselman noted that the undersized Bailey is playing out of position at the 5, but isn't backing down from opposing big men.

"When he plays the 5 spot, now he’s got quickness (advantage) every night over the opponent’s 5," Musselman said. "There’s no use saying what you don’t have. It’s kind of like, all right, so we’ve got these guys and now we put them in these positions and you try to create mismatches.

"Adrio, he’s got to out-quick the center every night and he’s got to sneak around get steals when they try to throw the ball into the post. He’s got to use his great athleticism."

Musselman also credited Bailey for opening up the North Texas defense with his first-half 3-pointer. And then Bailey's slam essentially put the finishing touches on win No. 2.

"His dunk obviously brought the crowd to its feet," Musselman said. "I thought our student section was awesome again tonight. That dunk kind of elevated all of our energy."