Allen: Choice of Arkansas-born Lunney a reflection of past success 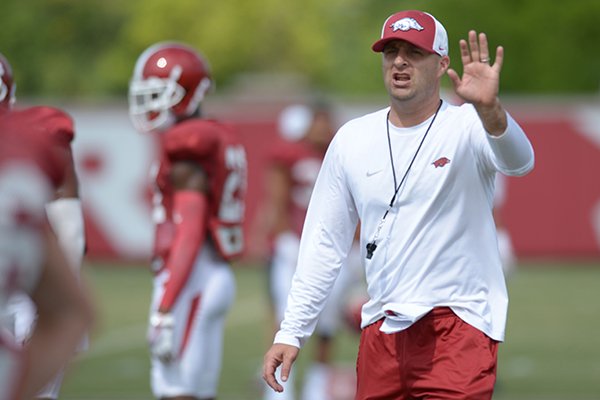 Lunney Jr. is the son of retired Fort Smith Southside and Bentonville High School coaching legend Barry Lunney Sr., and a star quarterback/baseball pitcher at Fort Smith Southside and a Razorback quarterback and baseball letterman (1992-95). He was a graduate assistant on Houston Nutt’s 1998-99 Razorbacks staffs and coached Razorbacks tight ends from 2013-17 for Bret Bielema and 2018-19 for Morris.

“He’s a Razorback through and through,” Yurachek said.

Obviously, it takes more than an Arkansas birth certificate and Razorbacks past to be a good Razorbacks coach, but it helps.

Once Broyles was eased into athletic director retirement and succeeded by the since-fired Jeff Long, seems the Razorbacks deemphasized Arkansas.

He should have paid him most. Horton’s recruited Arkansans: Jarius Wright, Joe Adams, Greg Childs and Tyler Wilson, among others, fueled Petrino’s Arkansas success.

Lunney has been the “Arkansas” coach for Bielema and Morris.

“Whoever we bring in, I hope they keep our homegrown talent in state,” Darren McFadden, the Razorbacks College of Fame inductee running back from Little Rock, tweeted. “If you look back, the majority of the time when we’ve had successful teams the core group of guys are from Arkansas.”

Easy when the Arkansas core is a high school All-American like McFadden. But past Razorbacks Arkansas-born All-Americans like Dan Hampton, Jimmy Walker and Wayne Martin, among others, weren’t much recruited by any but Arkansas.

“Now you’ve got to get kids from other states,” Jim Mabry, a 1989 Razorbacks All-American offensive tackle for Ken Hatfield, said during a recent Hawgs Illustrated interview. “I’m one of those guys. I came from Memphis. But the Arkansas kids are the ones who have the culture, who have the passion that set the tone. To me, if all things look equal, you take the Arkansas kid.”

Good that Hunter Yurachek just did.