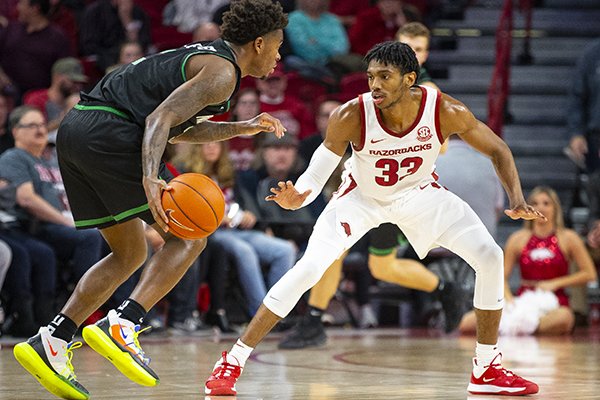 FAYETTEVILLE -- The University of Arkansas' defense was locked in during Tuesday's 66-43 victory over North Texas.

"We predicate our team on defense," Arkansas guard Isaiah Joe said on the Razorback Sports Network.

"I thought we played with great defensive enthusiasm tonight," Arkansas Coach Eric Musselman said. "We're through two games now, and we've held our opponents to 4 of 42 from three-ball, so we've done a great job of taking away that three-point line.

"Just a phenomenal job on defense."

The Mean Green also had 18 turnovers, which Arkansas turned into a 22-7 advantage in points off turnovers.

"They do a good enough job guarding the ball and keeping people in front of you. They've got good ball-screen defensive schemes, and they've got great athletes."

Arkansas, which downed Rice 91-43 in its season opener, held back-to-back opponents to less than 50 points for the first time since the first two games of the 2007-08 season. In the first two games under Coach John Pelphrey, the Razorbacks downed Wofford 67-45 on Nov. 9, 2007, then thumped Charleston 75-49 in San Juan, Puerto Rico.

Arkansas has posted two of the three best defensive efficiency games of Musselman's college career in his first two outings with the Hogs. The 48-point bashing of Rice was his best.

The Razorbacks led North Texas 28-16 at halftime. That gave Arkansas two consecutive games to open the season of holding their opponents to fewer than 20 points.

According to the HogStats.com Twitter account, it is the first time since at least 1969-70 the Razorbacks held their first two opponents under 20 points in the opening half.

North Texas opened the game with a huge scoring drought. The Mean Green missed their first 11 shots, including four from three-point range, before Zachary Simmons connected from underneath the goal.

Simmons' ice-breaker at the 11:28 mark of the first half cut the Mean Green's deficit to 9-2. The Razorbacks shot 4 of 11 during that span, including a long jumper and a three-point shot by Mason Jones.

The Razorbacks never trailed, though North Texas pulled within four points in the first half and within 38-33 in the second half.

Adrio Bailey brought the Walton Arena crowd to its feet with a powerful rebound dunk at the 7:45 mark of the second half.

Bailey followed a missed layup by Jimmy Whitt by grabbing the loose ball near the rim and slamming it through. The senior was whistled for a technical foul for hanging on the rim long enough to get steady, then lifting himself up. It was Bailey's first career technical foul.

The putback dunk gave Arkansas a 47-33 lead. Javion Hamlet's free throw for the technical foul made it 47-34.

Arkansas opponents Rice and North Texas had an atrocious stretch of 0-of-32 shooting behind the three-point arc spanning the first two games.

The Owls missed their last 22 three-point shots in the season opener Nov. 5 while going 2 of 25 overall.

North Texas missed its first 10 three-point tries before Deng Geu connected early in the second half.

Arkansas forward Adrio Bailey made his first three-point shot of the year, a deep one from the right corner on a pass from Isaiah Joe at the 2:12 mark of the first half. The deep ball gave the Razorbacks their first 10-point lead of the night, 24-14.

Bailey, a senior from Clarence, La., went 2 of 12 from three-point range last season.

Arkansas guard Isaiah Joe came out of the game with a noticeable limp at the 5:44 mark of the first half. A team trainer tried to get Joe to come to the end of the bench for attention, but Joe waved him off and sat closer to the coaching staff at the front of the bench.

Joe stood up moments later and began hopping in place, drawing another invitation from the training staff to have a look at his left ankle.

Again, Joe waved a hand and stayed where he was.

Arkansas guard Mason Jones missed a three-point shot after a razzle-dazzle behind the back pass from Jalen Harris to Jimmy Whitt, who whipped it to Jones on the left wing.

But Jones would not be denied his three points. Harris kept the rebound alive by running the baseline and tipping the loose ball to Jones, who was following his shot. Jones jumped and hit a scoop shot off the backboard on the other side of the rim while being fouled by Zachary Simmons.

The waning moments of the Evansville at Kentucky game were being shown on the video boards at Walton Arena as the second half was about to start.

The game ended a few moments later, though it was off the Walton video board. A few minutes later, during a timeout, the last few seconds were shown, with Evansville holding off the No. 1 Wildcats 67-64. A smattering of applause came from the crowd.

• Arkansas improved to 15-0 against North Texas.

• A couple of Arkansas students displayed a sign that read "Bud Walton is a no fake return zone," a reference to the faux fair catch North Texas punt returner Keegan Brewer turned into a 90-yard punt return touchdown against the Razorbacks last year.

• Arkansas guard Desi Sills went 0 for 4 from three-point range to fall to 0 for 7 for the season.