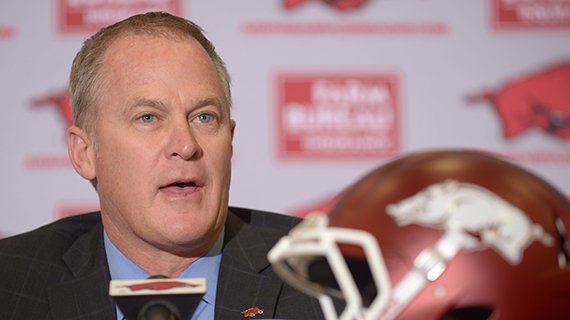 Hunter Yurachek, athletics director at the University of Arkansas, speaks Tuesday, Dec. 7, 2017, during a press conference to introduce Chad Morris as the university's newly hired football coach at the Fowler Family Baseball and Track Indoor Training Center in Fayetteville.

FAYETTEVILLE -- University of Arkansas Athletic Director Hunter Yurachek would like to start a movement that addresses the issue of buyouts for underperforming coaches.

There's not a huge crowd marching on that topic just yet, but at some point college athletics will have to take a hard examination of financial issues like that.

Yurachek fired second-year Arkansas football Coach Chad Morris on Sunday with four-plus years remaining on a contract that stipulates the UA owes him a little more than $10.1 million in monthly installments through 2023. Morris' future employment, which he is obligated to pursue, would reduce that amount.

Morris had a 4-18 record with the Razorbacks, the worst 22-game tenure for any Arkansas football coach.

Yurachek said he had been informed the athletic department has the resources to handle those payments.

"Obviously, it's a challenge for us to take that money from somewhere and apply it to a buyout," Yurachek said on Monday. "But, we've got a great chief financial officer [Clayton Hamilton] that has assured me that we have the means to do so."

Yurachek reiterated his thoughts about expensive buyouts at his joint news conference with interim Coach Barry Lunney Jr., while also speaking about the current reality.

"Well, the buyout situation throughout college athletics I don't think is great," Yurachek said. "I mean, there's huge buyouts in all these contracts, and I did say I thought that -- and I said it in my opening press conference -- that losing football games should be condition for terms of your employment to be nullified, and that's tough to be a pioneer in that because that hurts your candidate pool moving forward.

"It has to be an industry-wide change. It can't be one where Arkansas takes the lead on that per se or it's going to hurt our candidate pool. I don't see any significant changes in how we do our contracts, and we will pay what we need to pay to get the best person to take this position."

The buyout business has turned costly for some universities and lucrative for coaches. For instance, former Florida State coach Willie Taggart, also fired in the midst of his second year, is owed $17 million by the Seminoles. Ex-Tennessee coach Butch Jones is still being paid by the Volunteers, even though he's an analyst at Alabama now involved in helping to beat his former team.

Yurachek referenced Texas A&M's buyout of more than $10 million for Kevin Sumlin at his introductory news conference on Dec. 6, 2017.

"That's a mistake in our industry," he said. "It's not a sustainable model moving forward."

Former Arkansas athletic director Jeff Long negotiated a lucrative buyout for then-coach Bret Bielema after the Razorbacks went 7-6 and beat Texas 31-7 in the Texas Bowl after his second season in 2014.

The Razorback Foundation, the athletic fundraising arm for the UA and the guarantor of Bielema's deal, stopped making payments on his buyout earlier this year and the issue is now in legal channels.

Arkansas got into what was called a "mirror-image" buyout scenario with Bobby Petrino in December 2010 that called for $18 million buyouts for both the school and the coach after he led the Razorbacks to the 2011 Sugar Bowl, its only Bowl Championship Series berth.

That buyout did not come into play a year and a half later because Petrino was fired for cause after his much-publicized motorcycle wreck with his mistress on board on April 1, 2012.

Yurachek was in the second day of his search for a replacement for Morris on Tuesday, and potential candidates already were being asked about the opening.

Auburn Coach Gus Malzahn, the priority target for the Razorbacks to replace Bielema two years ago, gave succinct remarks at his Tuesday news conference when asked about the opening at Arkansas.

"I love Auburn, like I've said in the past," Malzahn said. "We have a bright future here. Nothing has changed."

Malzahn renegotiated a seven-year, $49 million deal with Auburn after the Arkansas interest in 2017, when the Fort Smith native led the Tigers past Georgia and Alabama and into the SEC Championship Game, where they lost a rematch against Georgia. Auburn faces the same two teams, with Samford sandwiched in between, down the stretch this year.

A person who identified himself as a former player wrote an open letter to Yurachek, UA Chancellor Joe Steinmetz and the UA board of trustees and asked it to be published by HawgSports.com, the local 247Sports.com outlet. The letter was presented as representing a group of former players.

In the letter, the player pointed out Pittman is from Grove, Okla., and "he knows what Razorback football is all about."

He added: "Coaches are often assigned regions that they understand and can effectively recruit, but the running joke was that Pitt went after whoever wherever because he could get them. Winning recruiting battles on the national stage is just another day in the office for Coach.

"I challenge you to find someone that mothers love the way ours loved Coach Pittman. ... Lastly, I challenge you to give the current athletes the opportunity to play for a coach that will show them how to be men. Give Sam Pittman an interview and he will win you over just like he always does."