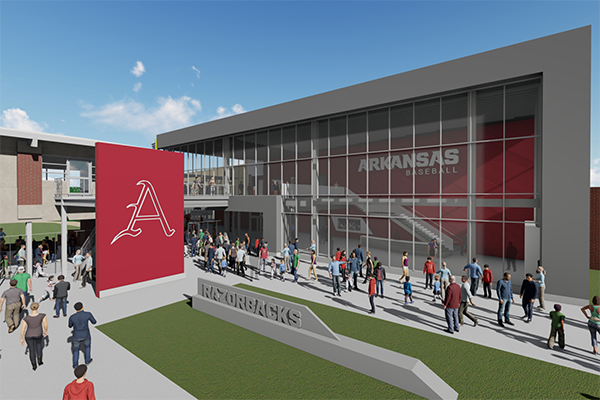 An artist's rendering shows the exterior of a proposed baseball operations center on the grounds of Baum-Walker Stadium in Fayetteville.

FAYETTEVILLE — A pair of donations totaling $1 million have been made toward the University of Arkansas' soon-to-be-constructed Baseball Development Center.

The matching $500,000 donations were made by former players Johnny Mike Walker and Mark Sutton. In recognition of the donations, the lobby of the center will be named for former Arkansas coach Norm DeBriyn, who coached Walker and Sutton in the 1970s.

The donations are the second and third to be publicly announced toward the new facility. The Willard and Pat Walker Charitable Foundation donated $5 million toward the facility last year, a donation that also included the renaming of Baum Stadium to Baum-Walker Stadium.

Johnny Mike Walker is the executive director of the foundation named for his late parents. Sutton is the former chief executive officer of UBS Americas.

The Norm DeBriyn Champions Lobby will include multiple displays that tell the history of the program. In statements released through the UA, Sutton and Walker were complimentary of DeBriyn, who coached the Razorbacks from 1970-2002, led the program to two Southwest Conference championships, one Southeastern Conference championship and four College World Series appearances, including a national runner-up finish in 1979.

DeBriyn is the program's all-time wins leader with 1,161.

“Coach DeBriyn is a man of remarkable character and it has been a joy to partner with the Walker Foundation to honor Coach DeBriyn and the legacy he leaves the University of Arkansas and the players who wear the uniform,” Sutton said. “He placed high expectations on us as student-athletes but placed even higher expectations on himself. His was an example I aimed for in my own profession and I am a better man having played under his leadership.”

“As one of his former players, I am just one of the many individuals whose life was influenced positively by Coach Norm DeBriyn,” Walker said. “Coach DeBriyn not only taught us baseball, he coached each of us in life. I will forever be grateful for those valuable lessons and his investment in me and others affiliated with the Razorback program."

The baseball center will be approximately 49,000 square feet and will cost up to $27 million to build. It will be constructed on the southwest side of Baum-Walker Stadium and include offices, training areas, a clubhouse and other amenities.

Groundbreaking for the building is scheduled for sometime in December. It is scheduled to be open by the spring of 2021.