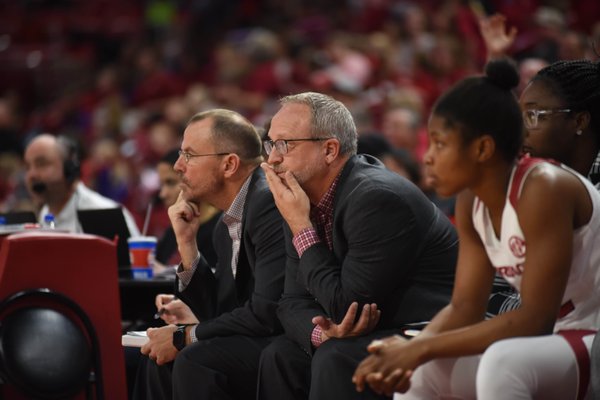 Guard Rylee Langerman, 5-9, of Christian Heritage in Del City, Okla., and center Destinee McGhee, 6-2, of Madison Academy in Alabama, also inked with the Razorbacks. ProspectsNation.com rates Langerman and McGhee as 4-star prospects and rates the class No. 15 nationally.

ESPN rates Eaton the No. 9 guard and No. 41 overall recruit in the nation for the 2020 class. She averaged 16.2 points, 4.6 rebounds, 1.8 assists and 1.6 steals per game while leading the Raiders to a 25-3 record and the second round of the state tournament.

“In my 22 years, she’s the most elite scorer I’ve ever been around,” Nettleton coach Jason Smith said. “She can take over the game not only with her shooting, but I believe at the next level everybody will see what a complete passer she is.”

Smith, who got his first coaching job from Neighbors at Cabot South Junior High 23 years ago, describes Eaton as a tremendous leader.

Eaton’s brother, Marquis, is a junior guard at Arkansas State. Smith said Neighbors and his staff did an outstanding job in recruiting Eaton and the decision to host her for an official visit in August was wise.

“The Eaton family, they're hoopers,” Smith said. “So I think the Razorbacks staff really focused on basketball when it came to them. A lot of official visits you want to do it around a big football weekend or some big event. The Eatons went and there wasn’t even a football game. It was straight basketball. Film room, study, talk about individual workouts. That’s what sold Elauna on the University of Arkansas.

"She wants the opportunity to play early and she fits to what Mike is doing to a T.”

Eaton was on Neighbors and associate head coach Todd Schaefer’s radar while they were at Washington.

“Elauna Eaton’s name was first written on our must-be-a-Razorback list when I was flying from Seattle to Fayetteville to accept the Arkansas job,” Neighbors said. “Even though we were 2,000 miles away, coach Todd Schaefer and I were closely following E.”

McGhee, 6-2, is rated the No. 8 post player and No. 66 overall prospect in the nation, according to Prospect Nation. She committed to the Razorbacks over scholarship offers from Arizona and North Carolina State on Nov. 10, 2018.

She was named 5A first-team All-State and USA Today second team All-Alabama.

“We first saw Destinee in Chicago,” Neighbors said. “I was given a tip by a colleague who thought I might compare her talents to those of Chantel Osahor during her All-American playing days. It took exactly 39 seconds of clock time to realize that tip was 100 percent accurate.”

Prospect Nation rates Langerman the No. 16 guard and the No. 68 overall recruit in the 2020 class. She has led Christian Heritage to two class 2A state titles.

Schaefer and assistant Pauline Love discovered Langerman in the summer of 2018.

“One by one, they were crossing off potential targets from the list for one reason or another,” Neighbors said. “However, their attention kept getting drawn to an Oklahoma prospect that made play after play on both ends of the court. Every loose ball was hers. Every rebound was hers. She would guard the opponents’ best player, and then go get herself a bucket.

"One phone call to me and one changed flight to see her play later, it was unanimous that we needed Rylee.”