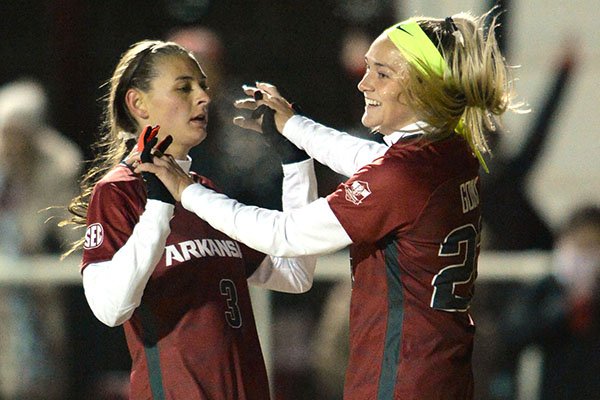 Arkansas' Parker Goins (right) and Tori Cannata celebrate after Goins scored a goal during an NCAA Tournament game against North Texas on Friday, Nov. 15, 2019, in Fayetteville.

FAYETTEVILLE -- The No. 8 Arkansas Razorbacks spent most of the night on the attack against North Texas in the opening round of the NCAA Tournament on a cold Friday night.

After a series of frustrating near misses, the Razorbacks got their breakthrough on Tori Cannata's header on a corner kick from Stefani Doyle in the 55th minute.

Then the floodgates opened and the Razorbacks capped off a dominating performance with a 3-0 victory over the Mean Green before a crowd of 1,331 at Razorback Field.

The University of Arkansas (17-3-2) advanced to the second round by improving to 3-0 in NCAA Tournament home games, and the Razorbacks are 18-1-2 in the past two seasons at Razorback Field.

"I thought it was a really complete, we don't use the word, but dominating performance," said Arkansas Coach Colby Hale, who won his program-record 99th game. "We probably play a little faster than what they're used to, and you could tell. They started wearing down a little bit. They made like three subs the entire game. You could tell they were starting to die a little bit."

The Razorbacks will face North Carolina State, a 3-0 winner over Navy on Friday, in the next round at 4 p.m. Central on Thursday. The match will be played in Provo, Utah, with No. 2 seed BYU as the host.

Arkansas took 16 shots in the first half but could not break through, but freshman Ana Podojil knew it was a matter of time.

"It took us a while to break through their defense, but we kept going at their back line, kept trying to do combination play around their backs and eventually, once we got that first goal, we knew that we would get on a roll and keep going at them," said Podojil, who had an assist.

"Colby's got an outstanding team," Hedlund said. "The more you watch them on film and try to break them down, you start to understand how good this team is and why they beat teams like North Carolina and won the SEC.

"They just keep coming at you. I think playing so many games in so few days, I think it finally had its toll on my starters. But so proud of them. I told them, 'Don't hang your head low, put it high because this is a team that will probably go to the Final Four because they're really good.' "

North Texas goalie Kelsey Brann kept a clean sheet through the first half, but her overstrained defense cracked under the constant pressure in the second half.

Parker Goins added a left-footed tap-in on a severe angle to the left of the goal after Brann stopped a Podojil shot from about 23 yards to make it 2-0 in the 82nd minute.

Freshman Kaelee Van Gundy notched her first goal, sending in a blocked shot from Marissa Kinsey, in the 84th minute to cap the scoring.

The Mean Green are now 0-7 in NCAA Tournament games, and they have not scored a goal in those losses.

"I would say we pretty much dominated them from the beginning," said Arkansas goalie Katie Lund, whose biggest activity was taking free kicks half way up the pitch. "Going into the second half, we didn't know we had it, but we knew we were going to get some chances and we needed to finish."

Three minutes into the second half, Doyle sent a crossing pass across the goal face in perfect shape for Cannata, but her shot went just left with goalie Brann not in position to make the save.

Brann made a sterling save on a left-footed shot from Kinsey, who had two assists, early in the second half. Arkansas' Ashton Gordon missed high from about 10 yards a little later, and Abbi Neece missed just right from near point-blank range a few minutes later.

"We knew they were extremely dangerous on set pieces," North Texas' Logan Bruffett said. "They're an extremely tough team to play. They're extremely aggressive and fast, and they keep coming at you."

Goins led the Razorbacks with six shots, while Cannata and Kinsey took four each.

The Mean Green's only shot came in the opening half on Madeline Guderian's free kick from about 30 yards after a Razorback foul. The shot came right down the middle and high with no curving action, making an easy save for Lund.