Montana no stranger to success 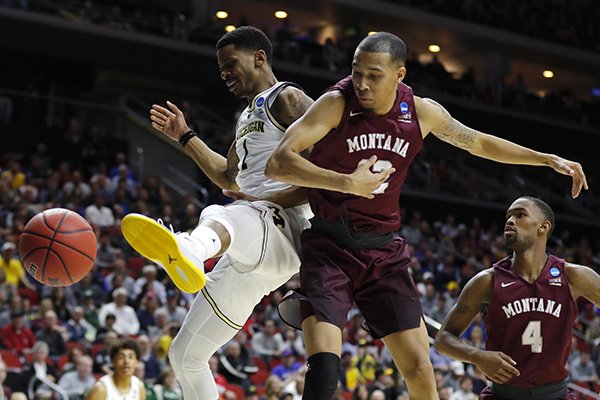 Know this: Since 2002, the Grizzlies have more NCAA Tournament appearances than the University of Arkansas.

CHALK TALK Montana and Arkansas haven’t played previously, but Razorbacks Coach Eric Musselman is 1-0 against the Grizzlies. In Musselman’s first season as Nevada’s coach, the Wolf Pack beat Montana 79-75 in a first-round 2015 Collegiate Basketball Invitational game in Reno. Nevada went on to win the tournament championship … Montana lost at Stanford 73-62 and beat Montana State University-Northern 64-50 in the Grizzlies’ first two games … Arkansas sophomore guard Isaiah Joe has hit 8 of 17 three-pointers and is averaging a team-high 4.5 assists … Sophomore guard Desi Sills had a career-high six rebounds against North Texas … Montana won the Big Sky regular-season and tournament titles the previous two seasons and played in the NCAA Tournament where the Grizzlies lost first-round games to Michigan 61-47 in 2018 and to the Wolverines again 74-55 in 2019 … Arkansas junior guard Jalen Harris is averaging 6.0 points off the bench.

The Razorbacks have made six trips to the NCAA Tournament in that 18-year span, most recently in 2018.

Montana has eight NCAA Tournament appearances since 2002 -- including the previous two years when the Grizzlies won Big Sky Conference regular-season and tournament titles and finished with records of 26-8 and 26-9.

Travis DeCuire, who played at Montana, has led his alma mater to a 110-59 record in his sixth season as the Grizzlies' coach.

Montana (1-1), which is favored to win another Big Sky championship this season, plays Arkansas (2-0) for the first time at 4 p.m. today in Walton Arena.

"Montana isn't going to come in here scared," Razorbacks Coach Eric Musselman said. "They are well-coached. They are tough. They're used to winning, and they have a star player."

The Grizzlies' star is 6-5 senior guard Sayeed Pridgett, who is averaging 23.5 points and 7.5 rebounds.

Pridgett had 17 points, 10 rebounds, 6 assists, 3 steals and 2 blocked shots in Stanford's 73-62 victory over Montana to open the season. He came back with a career-high 30 points, 5 rebounds and 4 assists in the Grizzlies' 64-50 victory over Montana State University-Northern.

[Video not showing up above? Click here to watch » https://www.youtube.com/watch?v=4isqIvYQzyI]

Musselman said he recruited Pridgett -- who is from Oakland, Calif. -- while coaching at Nevada.

"I've seen him play a ton," Musselman said. "He can draw fouls, can shoot the ball from the three, can dribble drive. He's a really good isolation player.

"You can play him all over the floor, because he can play four positions. So he obviously creates a lot of mismatch problems."

Six SEC teams already have lost a game this season, including No. 1 Kentucky and No. 23 LSU this week, and Florida last week when the Gators were ranked No. 6. Evansville upset the Wildcats 67-64 at Rupp Arena on Tuesday night, and VCU beat LSU 84-82 in Richmond, Va., on Wednesday night. Florida lost at home to Florida State 63-51.

Other SEC losses include Penn beating Alabama 81-80 in Tuscaloosa, Ala., and Richmond beating Vanderbilt 93-92 in Richmond.

"Every night it's hard to win," Musselman said. "People just don't understand in college basketball with a 40-minute game, a player gets hot and anything can happen.

"That's why literally every night -- not just across college basketball, but almost every night across our conference -- there are games coming down to the wire. You need to have an incredible respect for your opponent and an understanding that you've got to play for 40 minutes.

"You can't play a college basketball game for 12 minutes and come away with a win. You can't turn it on and off like a light switch. You've got to bring it."

The Razorbacks have brought it in their first two games, beating Rice 91-43 and North Texas 66-43.

The Razorbacks held Rice and North Texas to a combined 30.8% from the floor, which ranks ninth nationally. They're also 10th in steals (12.5 per game) and 12th in turnovers forced (22.5).

"Hopefully, we'll continue to play the defense that we've played," Musselman said. "We understand that teams are going to make some more shots maybe than what we've seen. But we want to stick with our defensive principles and continue to try and get better."

Montana's last victory over a Power 5 conference team was 83-78 at Pittsburgh during the 2017-18 season.

"The tradition of Montana in the Big Sky is phenomenal as far as what they have done in making NCAA Tournaments," Musselman said of the Grizzlies' 11 appearances starting in 1991. "We have great respect for Montana just like we did for Rice and North Texas."