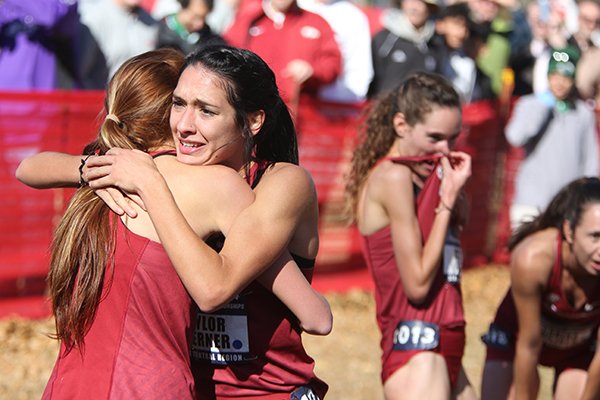 FAYETTEVILLE -- Unless a meteor shower hit the University of Arkansas Agri Park Course on Friday, it was a given the Razorbacks' No. 1-ranked women's cross country team was going to run away with the NCAA South Central Regional title.

But the Razorbacks were more than good. They were perfect.

Arkansas won its ninth consecutive regional title and 24th overall with a perfect score of 15 points to automatically advance to the NCAA Championships on Nov. 23 in Terre Haute, Ind.

"That's the perfect way to sign off here," Viljoen said of the seniors dominating in their final home meet.

Werner and Izzo finished the 6,000-meter race with an identical time of 20 minutes, 30.3 seconds, but Werner was declared the winner.

Texas finished second with 63 points to also advance to nationals.

It was the first time Arkansas finished with a perfect score at a regional meet.

"That was a dream come true," Werner said. "It's something I'm going to remember for the rest of my life."

The top four Razorbacks essentially crossed the finish line together, with Viljoen running 20:30.6 and Clark 20:30.7. Reed passed several runners in the final 200 meters to take fifth in 20:48.9.

"This is the last regional race of our collegiate career, so we went out with a bang," Izzo said. "We couldn't have asked for anything better than what we did."

Reed said she was contemplating what to do at the end of the race with Arkansas already having the title secured and Coach Lance Harter having told the Razorbacks to run relaxed.

"But I knew how much it would mean to everybody if we got a perfect score," Reed said. "Before the race people we were saying that we should try and go for it, and I was like, 'Yeah, OK.'

"I didn't really think that it would actually happen -- until I was out there. Then I went for it."

Clark said the top four Razorbacks didn't realize how close Reed was behind them.

"To finish and then turn around and see Maddie get that fifth spot was so exciting," Clark said. "We just had a lot of fun."

"I think the perfect part was that as a coach, they actually listened to what I told them to do," Harter said. "We had a good race plan, and they stuck to it. That made me feel good."

The plan was for Arkansas' runners to hold back the first 4,000 meters.

"Basically to just sit, let somebody else do all the work and lead, then roughly after the 4K mark, start revving it up," Harter said. "All four of [the top Razorbacks] stayed close together. Then I had Maddie just run her own race, and obviously she closed like gang-busters. That was just icing on the cake for us."

"This race just confirms that whatever we're doing in training is working mentally and physically," Harter said. "For us it was probably more of a good tempo training run. We were fortunate that they were able to do that."

While many runners from other teams collapsed at the finish line from exhaustion, the Razorbacks were laughing and hugging each other and family members and friends.

"We're so fit at this point of the season," Izzo said. "Our plan was just to let the other teams set the pace and be up there together, then the last 2K start pulling away.

"We have nationals in a week, so didn't want to do anything stupid. It was perfectly executed. Coach gave us a great plan."

Harter said it was emotional seeing the seniors take the top five spots.

"That's really special for them," he said. "That's a memory that they'll never forget, and neither will I."

Arkansas State University, led by a 23rd-place finish by junior Pauline Meyer, took sixth in the 22-team field with 186 points. The University of Central Arkansas was 13th with 363 points, and the University of Arkansas at Little Rock was 20th with 509.

The Razorbacks have won four NCAA track and field championships since 2015, including sweeping the indoor and outdoor meets last year, but Arkansas hasn't won a national title in cross country.

"We know we have some work to do, and it's going to be a very, very hard race," Viljoen said looking ahead to the NCAA meet. "But how we did [Friday] and our entire season has been building up to this. We feel we have all the tools we need to take on the nation."