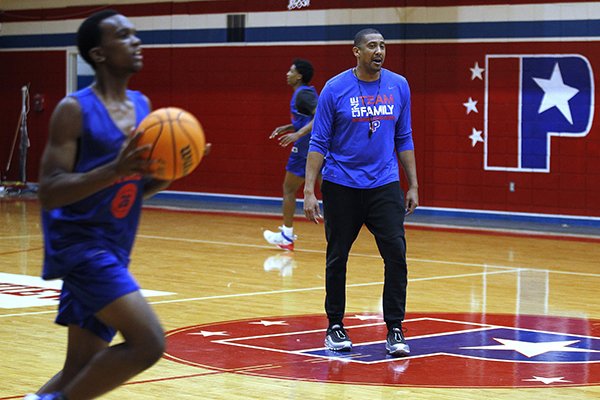 Former University of Arkansas basketball great and assistant coach Scotty Thurman is in Hog heaven since becoming the coach at Little Rock Parkview on July 25.

"I can't tell you how excited I am," Thurman said. "I don't know if I can even explain it. It's one thing to want a position, but it's another thing when you feel like it fits."

Although he has spent a majority of his life in his hometown of Ruston, La., and Fayetteville, Little Rock holds a special place.

"Outside of Ruston and Fayetteville, this has been my second home for quite some time," he said.

He earned his bachelor's degree from Philander Smith College and masters in secondary education from the University of Arkansas at Little Rock in 2012. After his playing days in Fayetteville, he often worked out at Parkview with Corliss Williamson, Derek Fisher and others when home from playing professionally overseas.

"I've moved on, and I just ask people to do the same thing," Thurman said about his departure from Arkansas. "I'm at Parkview, and I get the opportunity to work with kids. I don't have any ill will toward Coach Muss. I want those kids and that program to continue to thrive."

Thurman traveled to New York to consider working with the NBA office or teams as a player-development person.

While in New York, he received an unexpected call from Jason Flanigan, the son of then Parkview Coach Al Flanigan. The younger Flanigan asked Thurman about his future plans.

"At the time, he was actually having dinner with his dad," Thurman said. "I said, 'Tell your dad I said hello. I would love to catch up with him when I pass through Little Rock, and by the way, if he happens to retire, tell him I would be interested in the job.'

"Lo and behold, I get a call the following day from Jason saying, 'Hey, you need to call my dad.' "

The legendary coach who amassed a 545-147 record, seven state titles and 12 conference championships in 23 years at the school had decided to retire.

Al Flanigan and Thurman talked the next day while Thurman and his wife Regina were in Miami to watch their daughter at the USA Volleyball High Performance Camp.

Thurman applied and was offered the job. His desire to coach and mentor young people made the decision a no-brainer. It also meant he didn't have to displace his family in favor of an NBA job.

Parkview's style of play will be similar to what Thurman played at Arkansas, but he'll be flexible.

Thurman has put a premium on academics, and he said more than 60% of his players have a 3.0 grade-point average or better. Twenty-one of the 32 players made the honor roll.

Coaches from junior high to college to overseas shaped Thurman's outlook. Nolan Richardson, who led the Razorbacks to the school's only basketball national championship in 1994, taught him the value of hard work.

"Coach Richardson had a tremendous impact on me in terms of the work ethic, waking up early," said Thurman, who usually starts his day at 5:30 a.m.

Richardson also taught Thurman a lesson in urgency when he was going through the recruiting process. He had taken official visits to Arkansas and Oklahoma, and he had just returned from a visit to Pittsburgh when he received a call from Richardson.

Richardson then asked about other schools Thurman was considering, then he told his recruit why they were inferior choices.

"He was like, 'I just have one question. You want to come play for Arkansas or not? Because I need to know. All those other schools can't beat us,' " Thurman said.

Thurman said he needed to talk it over with his parents.

Thurman then told his mother about the conversation.

" 'Hey, I'm going to Arkansas. Coach just wore me out over the phone,' " Thurman said. "That was the end of the story. The rest is history."

Playing overseas after three years at Arkansas provided valuable lessons. His first stop was the Republic of Macedonia.

"I had a barber that didn't speak English that cut my hair," Thurman said. "I showed him how to cut it off of a picture. We became pretty good friends because I was forced to learn the language."

His late parents, Roma and Levell, affected him the most. His mother was a social worker while his father was an oil counter who worked seven days on and seven days off in the Gulf of Mexico.

"My mom is the hardest-working person I've ever known, but she was also the most loyal person," he said.

Seeing his father spend so much time away, Thurman was determined to be there for his wife, daughter and son.

"I never wanted my son, who's now 25, to have to grow up with his dad being gone the whole time," Thurman said.

And now Thurman is in a position to influence other young men's lives at Parkview.