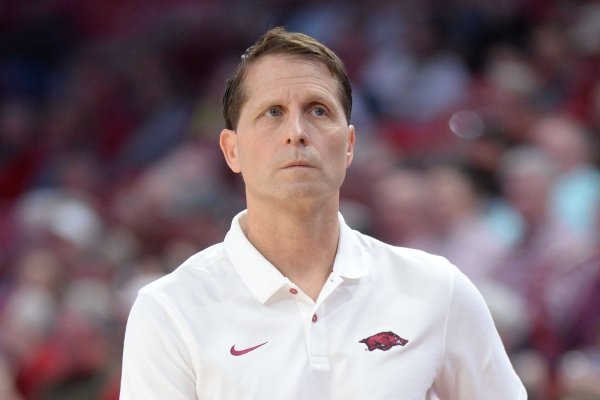 Arkansas Montana Saturday, Nov. 16, 2019, during the second half of play in Bud Walton Arena in Fayetteville. Visit nwadg.com/photos to see more photographs from the game.

FAYETTEVILLE — Throughout the course of Monday's film prep for Texas Southern, Arkansas coach Eric Musselman periodically paused the tape to show Razorbacks players the score of the Tigers' Nov. 9 game at Wichita State.

Texas Southern, a member of the SWAC, fell to the Shockers, 69-63, but Wichita State needed a 46-point second half and seven free throws in the final minute to pull out a home win over former LSU coach Johnny Jones' club.

The Tigers under Jones are no stranger to knocking off Power-5 programs on their home floor. Texas Southern beat Baylor to begin the 2018-19 season then handed Oregon a home loss three weeks later before capping nonconference play with a win at Texas A&M. Musselman, in previewing his fourth game as the Razorbacks' coach, said the Tigers are immune to the large crowds and bright lights that accompany larger venues.

They will attempt to grab their first win of the season Tuesday in Bud Walton Arena against an Arkansas team, though three games, that is playing with great confidence on the defensive end of the floor. Tipoff is set for 7 p.m.

"The guys that played last year know the euphoria or they know the type of excitement that they can have with a big win," he said of Texas Southern. "I don't think they'll be fazed at all. It's a team that understands every year that they're going to play a lot of these nonconference games like this, so that's what makes them scary as well.

"We have to be ready to play tomorrow night, for sure."

Aside from its narrow loss at Wichita State, Texas Southern lost by 35 points at San Diego State to begin the season and by 19 at South Dakota in its opening game in the Collegiate Hoops Roadshow. The Tigers are not particularly impressive offensively, scoring just 93.6 points per 100 possessions in the early going, according to KenPom analytics.

Musselman coached Jones, who scored a season-high 11 points against the Shockers, during his freshman season at Nevada.

"He can really shoot the ball, he’s got deep range, he’s a really confident player," Musselman added. "(He) plays kind of a combo guard. He can play the 1 or the 2, but he can shoot the basketball, for sure, and he’s got deep, deep range, so we’ve got to make sure we do a good job of not losing sight of him."

Ewing, who did not play in Texas Southern's loss at South Dakota, leads the team in scoring at 12 points per game. He scored a team-high 18 points on 6 of 9 shooting at Wichita State. Tyrik Armstrong, a 5-10 senior guard, is the lone Tigers player to score in double figures in each of the first three games of the season.

He has taken a team-high 27.5 percent of Texas Southern's shots when on the floor, per KenPom.

"You’ve got to prepare for everybody on their roster," Musselman said. "Their point guard can score the ball. He’s quick, he’s crafty with the ball. They run a lot of pick and rolls, so we have to have really good pick-and-roll defense as well. ... They've got some guys that are really talented.

"I think the biggest thing is just, like, (we have) another opportunity against somebody that we feel could win their league."

Offensively, Arkansas has a chance to take advantage of a few of the Tigers' deficiencies. Through three games, Texas Southern is allowing opponents to rebound better than 40 percent of their misses and shoot 44.4 percent from 3-point range. South Dakota, last Friday, made 16 of 23 attempts from deep.

The Razorbacks are off to a bit of a slow start in that regard this season, knocking down 29.9 percent in the first two weeks of the season. Desi Sills (11) and Jeantal Cylla (4) have missed all 15 of their 3-point attempts. Sophomore guard Isaiah Joe, despite a 2-for-9 night beyond the arc against Montana, is shooting 38.5 percent on 26 looks.

Musselman said the staff has had some players, roughly 3-4, look at film of their made and missed shots, similarly to a baseball player examining various at-bats during a hitless streak.

"Are they missing long? Are they missing short? Missing right, missing left? Are you shooting it off the bounce? Or are they catch and shoots? How close was the defense to you on your shot attempts?" Musselman said. "All of those things we're constantly trying to evolve as a staff with our guys and with our individual players when a guy has some misses on a particular night to build their confidence up and kind of for them to self-diagnose their own game."

Musselman also provided something of an update on sophomore forward Reggie Chaney, who was suspended indefinitely prior to the Razorbacks' season opener against Rice due to a violation of team rules.

"Hopefully we’ll be able to make a statement as early as tomorrow on Reggie’s status," he said.