'It's fun to play with him': Joe sparks Hogs with 2nd half surge 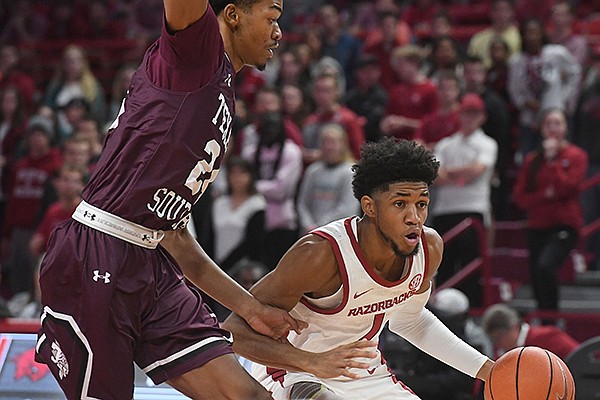 FAYETTEVILLE — Sophomore guard Isaiah Joe's shooting struggles in Arkansas' win over Montana on Saturday appeared to carry over into the Razorbacks' meeting with Texas Southern on Tuesday.

Against the Grizzlies, Joe finished an uncharacteristic 2 of 10 from 3-point range and failed to reach double figures in scoring for just the seventh time in 37 career games.

He got off to another slow start Tuesday, chipping in only four points on 1 of 7 shooting and 0 of 4 from distance in the first half.

Joe, though, came alive in the second half, exploding for 29 of his game-high 33 points after halftime in Arkansas' 82-51 win over Texas Southern. He knocked down all six of the Razorbacks' 3s.

"As well as he can shoot, I think he started 0 for 5 from 3-point range, so you know it’s going to come on the back end," Arkansas guard Jimmy Whitt said. "We all know he’s going to knock down 3s. It’s sort of scary when a guy that good goes 0 for 5 because on the back end he might bust out for 29 in the second half."

Joe finished one point shy of matching his career-high of 34 points in Arkansas' win over Florida International in December. Tuesday also marked the fifth time in his career he has made six-plus 3s in a game. The Razorbacks are 4-1 in those games.

The sophomore, a projected first-round pick in The Athletic's latest 2020 NBA mock draft, is known as a catch-and-shoot threat on the perimeter, but he mixed in a number of off-the-dribble scores during his second-half surge.

Joe made 3 of 9 catch-and-shoot 3s in the game and was effective off the bounce beyond the arc, too, hitting 3 of 4 attempts moving left.

In the second half alone, Joe was 6 of 9 from 3-point range and made 7 of 9 free throw attempts.

Through four games, he is shooting 41 percent from distance and holds a personal offensive rating of 116.8 (good for sixth among SEC players, according to KenPom), all the while playing 90 percent of Arkansas' available minutes.

"It’s fun to play with him. It’s great to see him go out and do things like that," said Whitt, who recorded his first double-double at Arkansas with 17 points and 10 rebounds. "We are going to need that. He’s a big-time scorer, big-time player, and moving forward that’s what we need from him."

Joe came away with five steals in the win as well. It is the fourth game in which Joe has finished with five-plus steals in his career. He became the second Razorbacks player with 30-plus points and five takeaways in a game since the 1996-97 season, according to HogStats.com.

The other? Mason Jones in Arkansas' season opener on Nov. 5 against Rice.

“It was interesting, at halftime and I told some of the coaches that everyone talks about Isaiah’s offense, but in reality, his man hardly ever scores - hardly ever,” Musselman said. “In the four games that I have been a part of coaching Isaiah, he has great anticipation. Mason has great anticipation. (Jalen Harris) has really good quickness, so kind of a calling card for us is going to have to be disruption defense.

“There are times like tonight when I thought we got undisciplined and gambled a few times, got out of position and gave them a couple of easy baskets. But sometimes you have to live with defensive aggression, and that is going to lead to a few breakdowns every now and then.”